Life-Saving Through Innovative Search and Rescue 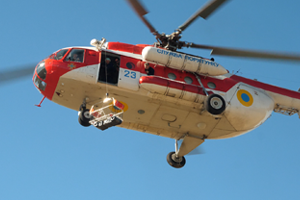 Currently, Ukraine is employing one Vita Rescue System, a helicopter-compatible rescue litter system produced by Vita Inclinata (Vita), a supplier of mobile rescue equipment, actively deployed on the eastern front. Following the deployment, Vita received a formal request from the State Emergency Service of Ukraine for 30 more systems within 48 hours of completing the mission. Vita is actively working with Congress to deploy more of this life-saving capability to the front in Ukraine.

In late March of this year, a mate of mine reached out to me about the Vita Rescue System (VRS). He emailed me, “I was scrolling LinkedIn, and I saw the VRS right next to a bombing of Kyiv. Can you help?” I found out later that the head of Ukraine’s emergency service was right next to my friend when he realized the impact that the VRS could have on the country’s fight.
There wasn’t a question in my mind about what we should do once I spoke with the Ukrainian military directly. First, we had to use a hotspot on Google Hangouts because they had lost all connectivity via normal means. Then, through the spotty connection with them in a bomb shelter, the Ukrainian ministry explained the importance of the system and the impact it could have. It was all I could do not to be distracted by their bravery and the unmistakable face of exhaustion on all of their faces. Within ten minutes, my co-founder Derek Sikora and I decided to divert all of our resources to ensure that we could deliver the VRS to Ukraine as fast as possible. Within three weeks, we were successful.

Once we got to the country, we learned that the Ukrainians had grounded a good bulk of their helicopters because of the lack of a mission set – we at Vita Inclinata were determined to change that. We knew that deploying the VRS could enable these crews and operators to get into the fight.

Enabling an Evolution in Rescue

The emergency services of Ukraine had never had the ability to perform medical evacuations with helicopters. So we showed up and had to train their personnel to use their hoist, deploy a rescue basket, and extract people out of the field. Although the Mi-8 helicopter had hoists, no one thought they could use those helicopters for medical evacuation (MEDEVAC) services.
By using the VRS, we were able to cut the training from a standard two weeks to less than three hours. Moreover, with the ability to have a stable rescue basket, the Ukrainians could now complete MEDEVACs without having to train the ground crew – enabling civilians to work directly with these helicopter crews. To put it simply, the Ukrainians were able to evacuate casualties and civilians with existing assets rather than spending weeks and money training people on how to do it. Examples like this prove innovation can change how wars are fought and how lives can be saved.

Now Ukrainian emergency services can go into the front and leverage a helicopter to quickly evacuate wounded from the front line and bring them to hospitals in Kyiv and Lviv. In addition, the VRS enables rapid rescue-basket extraction by eliminating the need for a ground-based stabilization of the rope – this changes the entire rescue dynamic.