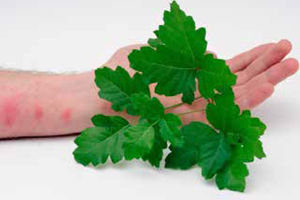 Zanfel Laboratories, Inc. is dedicated to producing high quality consumer products that address the issues associated with Poison Ivy, Oak and Sumac. Zanfel Poison Ivy Wash is a safer, faster and more effective option than steroids or antihistamines for relieving poison ivy, oak or sumac. Use of Zanfel gets warfighters back to duty in an itch-free, healing state.

Zanfel® Poison Ivy Wash is the only product clinically shown to remove urushiol, the toxin found in poison ivy, oak, and sumac, ANYTIME after outbreak of the rash. With a small amount of water, you can treat yourself in the field. Unlike Zanfel, other products temporarily reduce itching but do nothing to remove urushiol. Once the urushiol has been removed, the body is in a position to immediately heal the rash.

WORKS ON INSECT BITES AND STINGS

In addition to being used as a treatment for poison ivy, oak and sumac, Zanfel is also extremely effective for the pain and itch associated with Mosquito and Chigger Bites, Sand Flea and Sand Fly Bites, Bee, Wasp and Hornet Stings, Fire Ant and Black Ant Bites and other Insect Bites and Stings

ZANFEL BENEFITS AND SAVINGS TO THE MEDICAL COMMAND AND THE WARFIGHTER

PLANTS AROUND THE WORLD, WHICH ALSO CONTAIN THE POISON IVY TOXIN (URUSHIOL)

Risk of exposure to urushiol (the poison ivy toxin), is not only a North American allergic skin reaction. Below is a list of plants around the world that contain urushiol. Keep Zanfel on-hand during deployments to these areas.