View From the Top

By George Jagels and Steve Melito

The border between Canada and the U.S. is one of the world’s longest and most peaceful, yet policing it remains an essential and challenging task for both countries. In Maine, the U.S. Border Patrol’s Houlton Sector consists of 611 miles of rough terrain, with about 300 more coastal miles. The area is cold and snowy in the winter with dense foliage and swarms of mosquitos in the summer. Beautiful, to be sure, but no paradise for law enforcement.

In terms of climate and terrain, the contrast with America’s Southern border is clear; however, the Canadian frontier is not crime-free. Illicit activities occur, and the Border Patrol must perform law enforcement and counter-terrorism missions vigilantly, even in the wilderness of Maine. Houlton Sector exemplifies how “out of the way” border areas can be monitored without large amounts of manpower. To fulfill their mission, the sector’s 202 agents utilize forward operating bases, enhanced equipment, intelligence sharing, public awareness, and, of course, grit.

Crime off the Highway

Interstate 95, one of the most trafficked highways in the U.S., has its northern terminus in Houlton, ME. So while the sector itself is isolated, it could serve as a convenient pass-through point for criminals seeking the huge markets of East Coast metropolises. Getting around ports of entry isn’t easy, but neither is policing the wilderness.

Houlton Sector Intelligence Unit Patrol Agent in Charge Tony Barker told S&BP that the sector’s geography presents a special challenge. “The diversity of our operating area makes it very unique,” Barker said. Agents must work in the choppy waters of the Atlantic as well as urban areas and deep woods.

The Border Patrol interdicts a variety of crimes in Houlton Sector, with no one type predominating. Transnational criminal organizations from Canada operate in the area, and narcotics and illegal alien smuggling are concerns. The Border Patrol must apprehend those who avoid official ports of entry. “We run into Canadian citizens with criminal records which make them inadmissible … so they try to enter the U.S. surreptitiously,” said Division Chief Patrick Murphy. “We [also] run into foreign nationals who have temporary status in Canada that may be running out, so they try to secretly enter the U.S.”

These issues, however, are part of a larger, and challenging, responsibility. “Realistically speaking, I can’t say we focus just on narcotics or illegal aliens,” Barker said. “We’re truly an all threats agency that tries to provide the utmost security for the state.” 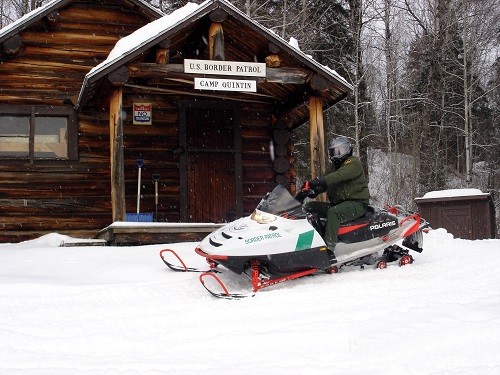 A Border Patrol agent leaving Camp Quinton for a snowmobile patrol in the remote northern woods of Maine. (DHS)

To accomplish this mission, agents are known to use snowmobiles, four-wheelers, and snowshoes; however, much of Houlton Sector’s equipment is identical to that used on the Mexican frontier. “Border Patrol work has core responsibilities and roles,” Barker stressed. “A lot of those are learned on the Southern border and are applied on the Northern border in the same fashion.”

The first order of enforcement is simple: dedicated agents. Barker emphasized that agents are always on patrol. Circumstances dictate schedule; agents will stay on the job for as long as necessary to address the intelligence and the threat. Yet it’s clear from speaking with Houlton Sector agents that geography profoundly affects their operations, and finding ways to strengthen their capabilities at critical junctures is a priority. One way of doing this is having the Air and Marine Branch of Customs and Border Protection provide transportation across large areas. This can allow for a rapid response to actionable intelligence, effectively focusing limited resources.

Forward operating bases (FOBs) are another force multiplier used in Houlton Sector. Often tucked away in arduous wilderness areas, these camps (usually permanent structures) help agents gain situational awareness and assist in rapid response. This “organic approach,” according to Barker, lets the Border Patrol “launch full operations out of [these facilities] in order to forward deploy agents to wilderness-type operational environments [for] rapid response to threats an actionable intelligence.”

Manpower stationed at FOBs varies, but a base’s capabilities are permanent. Along with full communications capabilities and housing for agents all year, FOBs allow agents to gain situational awareness on off-the-grid areas that have, historically, been very difficult to patrol, thus allowing them to determine threats, risks, and vulnerabilities, Murphy told S&BP. “If we don’t have any deployment in an area for a long period of time and we’re relying on anecdotal information, we don’t have a clear picture of what the actual situation is in that area. FOBs allow us to deploy specially trained agents for a time period … [so we can] gain better situational awareness.”

To strengthen its capabilities, Houlton Sector works with federal, state, tribal, and local authorities to better monitor the border. This “whole of government approach” is another way to increase the agency’s reach without requiring permanent personnel increases or significant investments. The Maine Warden Service and Border Patrol, Barker noted, have developed a close relationship. Both agencies operate in the state’s vast wilderness and share intelligence frequently.

The Department of Homeland Security (DHS) grant program Operation Stonegarden (OPSG) has made cooperation easier by funding overtime and equipment purchases by local and state agencies that participate in homeland security missions. Through OPSG, the Maine State Police may enhance their patrol duties in an area where Border Patrol intelligence indicates more illegal activity is likely to occur. Each agency is still focused on its own primary mission, but OPSG funding fosters a more symbiotic relationship. “It helps other agencies come to the table and help us with our mission,” Murphy said.

Interagency cooperation with Canadian authorities is just as critical. Barker referred to the Royal Canadian Mounted Police, Canadian Border Services Agency, and Canadian intelligence service as “partners” with whom the Border Patrol collaborates constantly. The Integrated Border Enforcement Team program, for example, is a bi-national partnership that gives the Border Patrol a way to share information quickly with Canadian law enforcement. This program, Barker noted, helps “keep intelligence fresh and actionable” while adding another layer of depth, effectively “pushing the border out” through greater capabilities.

“Criminals don’t worry about borders,” Murphy said. “In fact, they capitalize on them … We figured out a long time ago that working together with our Canadian partners … we could eliminate the border as a barrier to our enforcement efforts.” 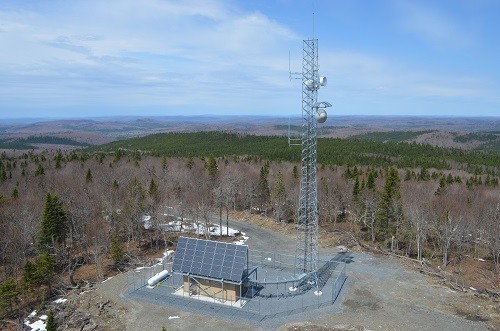 Technology for All Conditions

Houlton Sector uses a variety of open-source and DHS-specific technology to monitor the border. Working with the CBP’s Enforcement Technology Program (ETP), its last major project was a ruggedized Mobile Video Surveillance System, or scope truck. Used mainly during darkness, the truck’s thermal imaging is effective both day and night. The camera and lift were adapted to the Northern border, and the vehicle is deployed throughout the sector. ETP also deployed the most recent pole camera system. CBP’s Office of Technology, Innovation, and Acquisition assists the sector in deploying other technologies. Open source tech is also used, such as unattended ground sensors. Agents declined to discuss the make and model of either the camera or sensors.

Barker praised the modernization of the sector’s land mobile radio system, often known as tactical communications. “Historically speaking, interoperability between state, local, county, and tribal partners was ad hoc,” he said. In other words, communications systems didn’t talk to each other. To address this, Border Patrol partnered with the Maine Emergency Management Agency to examine the problem holistically and find solutions. The result is a narrow-band, fully encrypted system with increased coverage through more numerous repeater towers. This was done in conjunction with state authorities, who will soon be fully integrated into the system. Here the “whole-of-government” approach is in action.

“This is a state-of-the-art, cutting-edge tactical communications platform that we rolled out,” Barker added. “It goes beyond [Maine]. It’s really an all DHS approach.” FEMA, Secret Service, and the Coast Guard are also integrated into the system through a DHS common network.

The Beyond the Border Initiative, a plan for integrated perimeter security between the U.S. and Canada, requires interoperability between U.S. and Canadian tactical communications. Despite the differences between the two countries’ systems, voice-over Internet protocol technology allows these independent systems to communicate. The project is ongoing, and proof-of-concept testing has been successful.

As a large, rural, and relatively lightly trafficked area, Houlton Sector relies on local citizens to provide agents an extra advantage. In August 2014, an area resident called the Border Patrol to report that a person walking along the border seemed very out of place. Agents responded and apprehended a Rwandan for whom Canadian authorities had issued an arrest warrant for war crimes. “These are the kind of stories you don’t hear about in the numbers,” Murphy said. “We try to gain trust and understanding within the community … No matter how many agents we have, we can’t be everywhere at all times, but we have so many extra sets of eyes and ears with our community members.”

This article originally appeared in the Winter 2014/2015 issue of Security & Border Protection magazine.