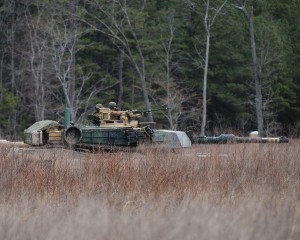 “Since we will only have two tank companies, we will need augmentation either from the reserves (tank companies from 4th Tank Battalion) or internally within the 2nd Marine Division with attached mechanized infantry companies to operate as a maneuver battalion.  We won’t be able to operate as in the past and the largest impact will be on 2nd Marine Division infantry,” Bodisch explained. “Our ability to task organize as mechanized and armor company teams for our infantry regiments will be greatly limited, as well as our ability to form task organized mechanized and armor battalion-sized task forces for the division,” he added.

Once Charlie Company is deactivated, 2nd Tank Battalion will be comprised of 30 operational M1A1 tanks equipping the unit’s remaining A and B companies. Supporting the east coast Marine Expeditionary Units, Black Sea Rotational Force and US-based ITX exercises will significantly impact our ability to support other contingencies and division-level training at Camp Lejeune, Bodisch said.

“There will be an impact on training at both the higher and lower echelons, and the reduction here at 2nd Tanks could degrade 1st Tank Battalion’s company-level training opportunities as we may have to rely on them for increased support for our ITX exercises, as we may only be able to send a company headquarters and one tank platoon, before the cuts we sent a full tank company (company headquarters and three tank platoons), that has to be filled out somehow,” Bodisch explained the two battalions will come up with an agreement to minimize the impact of the overall force structure reductions.”

“Charlie Company has the richest history of all USMC tank formations, it was the first company to see combat in World War II, and since has participated in every battalion-level combat deployment of 2nd Tank Battalion, we’ve invited as many former Charlie Company commanders and alumni we could locate, the deactivation ceremony is generating substantial interest,” Bodisch noted.

Looking toward a much-reduced 2nd Tank Battalion, Bodisch pondered, “what will be the future for mechanized armor in the Marine Corps, I am not sure anyone is asking that question.”

Also, be sure to check out the piece on Delta’s Company’s deactivation!