Unleashing the Power of Emergence 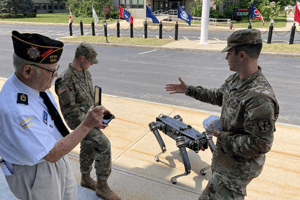 Project Convergence exemplifies Army Futures Command (AFC) ability to make good on its founding promise to lead persistent modernization of the U.S. Army. Often referred to as a campaign of learning, Project Convergence unites new and developing technologies, including systems of systems, in a relevant operational context. The intent in part is to determine what these new technologies can and cannot do, including resolving any disconnects between other systems and networks.

Project Convergence is especially focused on one aspect of Multi-Domain Operations, or MDO: the ability to continuously converge effects across air, land, maritime, space, and cyberspace domains. The goal is to deliver the right capabilities in the right place to enable the Joint Force to win. Many of the systems in Project Convergence are nascent outcomes from AFC’s cross-functional teams, or CFTs. Even though the individual technologies and systems from these CFTs might be functional and meet their targeted performance criteria, assuring they cooperate as part of larger systems of systems is nontrivial. Project Convergence provides the opportunity to experiment with both technology integration and how Warfighters will deploy these new capabilities. Failure is permitted during such excursions but with a caveat: an expectation to capture and resolve capability gaps that are revealed from such experimentation.

Director of DoD Manufacturing Technology (ManTech), Ms. Tracy Frost, highlights the additional importance of assuring an equally capable industrial base to deliver these new systems and capabilities. “As the Army moves forward with Project Convergence, it is linking its development activities to scalable production. Through engagement with the OSD Manufacturing Technology Program Office, particularly the DoD Manufacturing Institutes, the Army is leveraging prototyping capabilities and an ecosystem that represents the ‘supply chain of the future’. Manufacturing new systems will be a key element in Army emergence because ‘if you can’t make it, you can’t have it’.”

To assure persistent overmatch, the Army needs to improve its understanding of how new research outcomes and technologies from government laboratories, universities, and visionary entrepreneurs potentially combine into future capability. Researchers and concept developers across AFC are now asking a new set of questions: what if we experimented with combining multiple technologies into emergent capability long before they are mature enough for Project Convergence, CFTs, and other Army systems? What if seemingly disparate research from AFC scientists and external contributors converged into a conceptual capability that can’t be built yet – but its benefits hypothesized and tested and compared against other possible research combinations? And what if the proven goodness of Project Convergence, such as initiating an early campaign of learning and uniting diverse teams of expertise, could be used to collectively build transformational and 10X capability?The first step is to promote a better understanding of how the Army develops and deploys new capability.

There are three assumptions that often limit military and commercial innovators from achieving the shared goal of deploying decisive competitive advantages to Warfighters.

First is the assumption that the Army delivers the best science and technology, or S&T, directly to the Warfighter. This is incorrect. The Army delivers the right Warfighter capability informed and enabled by the right S&T, concepts, and requirements. More specifically, the Army develops validated DOTMLPF-P (doctrine, organization, training, materiel, leadership, personnel, facilities, and policy) capability. Effective capability relies as much on the right tactics, techniques, and procedures as it does on exploiting technological advances.

A second assumption is that the Army and the wider Department of Defense, or DoD, need singular scientific breakthroughs to create transformational capability and overmatch. Fostering research that leads to such breakthroughs is absolutely necessary but challenging for several reasons. It’s true that technologies like the transistor, digital computer, and the laser have had revolutionary impact on both military and commercial capabilities. However, such profound and pervasive breakthroughs are rare and often take decades to manifest into a practical device, system, or platform. How can the Army still create transformational capability in the meantime? It can more aggressively explore novel combinations of readily available technologies and emergent research to create new capability.

Third is the assumption that we need to focus on exploiting “disruptive” technological advances to stay ahead of our competitors and adversaries. This assumption is woefully incomplete. Equally disruptive and innovative approaches are also needed to improve the agility and efficacy with which the Army and the DoD transform science and technology into deployed Warfighter capability. Our acquisition cycle and procurement system should be a competitive asset. Timely deployment of needed capabilities that exploit the right disruptive technologies should be the proper measure of acquisition success.
With a more holistic understanding of how the Army transforms science into capability, it is possible to explore how Warfighter solutions could emerge earlier from need-inspired combinations of seemingly disparate research outcomes.

Getting to Emergent Capability Collectively

Biological systems have long exploited one of the most powerful phenomena in nature: emergence. Collectives of individual organisms combine through a process known as self-assembly to create an emergent capability that no single organism can produce alone. A familiar example is the ability of ants to adaptively build a bridge by linking their bodies together. The resulting bridge is an emergent capability that allows for the transport of food and building materials back to the ant colony. The entire colony benefits from this unique and competitive advantage. By analogy, Project Convergence reveals how the Army can generate MDO capability by harmonizing disparate systems of systems into more complex warfighting effects.

Similarly, there are numerous examples of commercial capability emerging, often unexpectedly, from collectives of technologies originally developed for other applications. When inventor Dean Kamen began work on his self-balancing iBot wheelchair, it demanded the complex integration of both available and newly invented technologies. Nicknamed “Fred” after Fred Astaire, iBot was a robotic-enabled system that provided unprecedented mobility compared to conventional wheelchairs. This included the emergent capability to walk up and down stairs. Equally remarkable however is the impact Fred’s core innovations had, in part, on the emergence of the billion-dollar micro-mobility market. Dock-less electric scooters manufactured by Lime, for example, benefit from unique technologies originally developed for iBot.

Mr. Kamen shared from personal experience, “When adopting and combining technologies, both existing and emerging, we cannot be risk averse. We must seek user feedback early and often to achieve the disruptive capabilities that they seek. Sometimes capabilities that we could not imagine will emerge, because nobody can predict with certainty what ideas will work. Yes, many will fail, but some will succeed. And it is those successes that change the world.”

AFC is exploiting the concepts of self-assembly, collectives, and emergence radically earlier, long before new scientific advances mature into actual devices and systems. There are good reasons to do so. In the face of increasingly aggressive near-peer adversaries, incremental improvements of familiar Army systems and platforms will be insufficient. Another key challenge the Army and the wider DoD must face is objectively deciding which research areas to invest in. Anticipating how singular, unrelated research areas might combine to create future capability could help prioritize which areas will have the most significant military impact.
BG David Trybula, Deputy Commanding General of the U.S. Army Combat Capabilities Development Command (DEVCOM), noted, “In an era of persistent competition, emergence is critical to generating DOTMLPF-P solutions for the warfighter to enable persistent modernization and ensure our Soldiers always have overmatch capabilities.”

Welcome to the Dog Pound

In an Army experiment dubbed “Dogs with Fleas and Ticks,” a small, diverse group of people self-assembled to create hypothesized capability based on multiple research efforts and technologies. In this lexicon, dogs are quadruped robots, fleas are small unmanned air systems (SUAS), and ticks refer to all other enabling technologies (e.g., artificial intelligence, additive manufacturing, offloaded sensors, etc.). The goal was to collectively expand Soldier/robot capability while minimizing cognitive and physical burdens on the Soldier.

The minimum viable product, or MVP, cycle was adapted to create emergent capability from unrelated but complementary technologies. This collective, known as the “dog pound,” allowed individual technologies to enter and exit as needed. What emerged was a Soldier/robot capability that assessed and adapted to specific mission needs. In one scenario, chemical/biological hazard sensors with long-term power sources were offloaded from the quadruped robots to greatly enhance situational awareness and perimeter security. In another hypothesized scenario, multiple SUAS and unattended ground sensors, or UGS, detected the relative position of adversaries. This information was used to position quadruped robots with ballistic shields to protect dismounted Soldiers. Wargaming of this robotic-augmented protection concept demonstrated a 36% increase in Soldier survivability.

The benefits of the initial dog with fleas and ticks collectives experiment were multifold. New opportunities to exploit the ability of quadruped robots to navigate highly difficult and dangerous terrain were identified. Notional integration of disparate technologies revealed capability gaps, disconnects, and research opportunities that could not be identified by assessing singular technologies. The ability to compose and recompose needed capability from a relatively small number of systems was notionally demonstrated, thereby reducing size, weight, power and logistics burdens. Such insights could help inform more complex and leap-ahead concepts and requirements based on multiple technologies and systems. Most importantly, the dog with fleas and ticks collective gave researchers a much earlier opportunity to explore the potential impact of their individual technologies on future Warfighter capability.

MDO reveals a far more complex operating environment than the Army has ever known. New and adaptive ways to detect, decide, and deploy effects across air, land, maritime, space, and cyberspace domains will be essential. Global diffusion of S&T advances, driven largely by universities and the private sector, suggests near-peer adversaries will have access to many of the same enabling technologies that we do.

AFC and the Army Modernization Enterprise are well-positioned to pursue an additional path to transformational concepts and requirements: emergence. Unprecedented opportunity now exists to explore, demonstrate, and most of all, deploy game-changing warfighter capability by harmonizing multiple S&T outcomes much earlier.