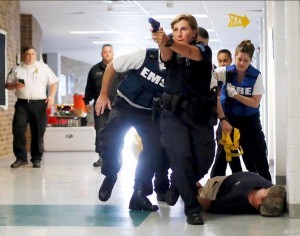 Police, firefighters, and paramedics are facing challenges that tactical medicine can address. Recently, C&CC attended a two-day training event to assess what civilian responders are learning – and how.  By Steve Melito

Across the United States, first responders are applying lessons from Tactical Combat Casualty Care (TCCC) to high-risk civilian medicine. School shootings, workplace violence, domestic terrorism, and targeted attacks on law enforcement officers (LEOs) and firefighters can require a response that combines emergency medicine with tactical and rescue operations. From cities and suburbs to exurbs and rural areas, civilian responders are asking for and receiving education and training.

Military medical responders are familiar with guidelines from the Committee for Tactical Combat Casualty Care (CoTCCC), but may be less familiar with the CoTCCC’s civilian counterpart, the Committee for Tactical Emergency Casualty Care (C-TECC). Though an independent civilian entity, C-TECC receives guidance and support from CoTCCC. For civilian responders, C-TECC guidelines inform the growing field of Tactical Emergency Medical Services (TEMS), which provides a robust framework for learning.

TEMS involves both classroom instruction and hands-on training. That’s why last summer, approximately 65 civilian responders from four Northeastern states gathered at Drury High School in North Adams, Massachusetts for two days. The event’s organizer, Amalio Jusino of the North Adams Ambulance Service, welcomed LEOs, firefighters, and emergency medical technicians (EMTs) from New York, Connecticut, Vermont, and Massachusetts. He asked them to keep an “open mind” about what they’d learn, and to think of themselves of as “a team” rather than as members of separate branches of emergency response.

Breaking down inter-agency barriers isn’t easy, but Jusino’s philosophy can succeed. As part of the Northern Berkshire Regional Emergency Management Committee (NB-REPC), he recently traveled to Washington, D.C. to accept a 2015 Community Preparedness Award from the Federal Emergency Management Agency (FEMA). “We have a no-borders planning committee,” Jusino said of NB-REPC in an on-line interview with iberskhires.com. “Everyone has a voice at the table”.

Some civilian responders may feel they’ve been silenced, but there are leaders who listen. After Jusino spoke, North Adams Mayor Richard Alcombright told the TEMS trainees about his concerns for responder safety. Recent attacks on police officers across the U.S. are well-known, but Mayor Alcombright also noted a 2012 incident in West Webster, New York in which an arsonist shot and killed two firefighters.

A failed bank robbery also informed the Mayor’s support for the two days of TEMS training. A former bank president, Alcombright recalled a May 2008 incident when the Massachusetts State Police (MSP) bomb squad was called-in to clear what was believed to be military-grade TNT and a detonator device from a failed robbery. “North Adams is a small city,” he explained, “but it’s a microcosm of larger urban areas”.

Another more recent incident illustrates how threats that may seem remote could challenge civilian responders, and force local personnel to address a mass casualty incident (MCI) that requires preparation and training.

On July 4, 2015, FBI agents apprehended Alexander Ciccolo at his apartment in Adams, Massachusetts after the 23-year old purchased four firearms illegally. Acting on a tip from Ciccolo’s father, a captain with the Boston Police Department, federal investigators found partially-constructed Molotov cocktails and pressure-cooker bombs. Ciccolo, who is known on-line as Ali Al Amriki, has been charged with plotting ISIS-inspired attacks on college campuses.

In North Adams, home to the Massachusetts College of Liberal Arts (MCLA), speculation centers on whether MCLA or a school in the Boston area was Ciccolo’s intended target. Regardless, said Sean Barry of Close Range Tactical Consulting, the lead instructor for the TEMS event, a terrorist attack on a school is “what keeps him up at night”. In the event of such an MCI, first responders in a geographically-remote area like North Adams would have to “hold the fort until outside help arrived”.

A self-described “hybrid” between an LEO and a medic, Barry has state and local police experience and is graduate of the U.S. Department of Homeland Security’s Counter Narcotics Terrorist Operations and Medical Support (CONTOMS) program. “Cops hate medicine,” Barry said, but they need “baseline skills” such as how to apply a tourniquet – even to themselves. At the same time, EMTs can’t wait to administer emergency medical care because “the patients will bleed out” while LEOs secure the area.

Barry taught TEMS attendees by examining attacks on LEOs in Massachusetts, and analyzing MCIs across the U.S. and around the world. Case studies included school shootings at Newtown, Connecticut and Columbine, Colorado; the Boston Marathon Bombing; and the Beslan School Siege in Russia. The MCI at Columbine High School led to major changes in operational procedures, Barry said, because “the shooter had control of the location for a long time” while medics waited to enter the building.

By contrast, medical care in the aftermath of the Boston Marathon Incident was almost immediate. EMTs applied tourniquets, but so did civilians who tore their shirts into strips to create makeshift medical devices. An area near the finish line had been configured to support personnel in the event of an MCI, and five Level 1 trauma facilities were just miles away. Most communities don’t have as many hospitals as Boston, however, so local responders may be a patient’s only medical resource during the “golden hour”, the critical period after wounding.

Barry then explained how police officers in Ashland, Massachusetts are required to carry the Combat Application Tourniquet (C-A-T) from North American Rescue (NAR). A true one-handed tourniquet, the C-A-T uses a windlass system with a free-moving internal band to provide true circumferential pressure to the extremity. “It’s very easy to use,” Barry said, and attaches readily to a police vest. He also demonstrated the tourniquet’s use on his leg. “Get it as high as possible,” he advised, “and crank it tight”.

Next, Barry demonstrated the SWAT-T tourniquet from TEMS Solutions, Inc. “It’s like a tire inner tube,” he said, noting that the device is made of “strong, durable rubber”. According to published durability-test results, the stretch-wrap-and-tuck tourniquet (SWAT-T) can be stretched to 250% of its length over 5000 times without a reduction in effectiveness. The SWAT-T’s poly-isopropyelene construction also withstands extreme heat and cold, weather conditions that many civilian responders face.

“Don’t be afraid to use tourniquets in the field,” Barry told the TEMS trainees. He then described several other technologies. Hemostatic agents such as QuickClot from Z-Medica are “great for areas where you can’t apply a tourniquet,” he said. Impregnated with kaolin, QuickClot non-woven gauzes conform to the wound site and won’t break down under pressure. QuickClot gauze typically stops bleeding within minutes and comes in easy-to-tear pouches that support field use.

Barry also demonstrated the Israeli bandage, which stops stop bleeding from hemorrhagic wounds. Designed by Bernard Bar-Natan, a former Israeli Defense Forces (IDF) combat medic, the Israeli emergency bandage is credited with helping to save the life of U.S. Representative Gabrielle Giffords, who was shot during a meeting with constituents with on January 8, 2011. According to the Jerusalem Post, emergency responders in Pima County, Arizona had acquired the devices just months before the shooting.

Next, Barry showed a video that demonstrated the simulated use of a chest seal for intraosseus access. Designed for so-called “sucking chest wounds”, chest seals allow air to escape from the pleural cavity while facilitating lung re-inflation. The product in the video, North American Rescue’s HyFin Chest Seal, is a completely occlusive dressing that’s used for the treatment of penetrating wounds to the chest. NAR’s HyFin Chest seal forms a reliable seal under even adverse conditions and comes in an easy-to-open pouch.

Finally on Day One, TEMS trainees learned about lifts and carries. Barry mentioned collar drags and throw ropes, but focused on technologies from NAR and Skedco. NAR’s Talon II Model 90C Collapsible Hand Litter features collapsible handles and six points for IV attachments. The Sked Basic Rescue System is made of durable plastic and comes equipped for horizontal hoisting by helicopter. Participants would these and other TEMS technologies during a simulated MCI the next day.

Putting It All Together

When police, firefighters, and EMTs arrived at Drury High School early on Saturday morning, Jusino and Barry provided an overview of the simulation that responders would face. A student had entered the building with a weapon, and several shots had been fired. J.D. Hebert, a security consultant from nearby Pittsfield, Massachusetts, added to the realism by applying moulage to mock victims. Thanks to the school’s audio system, the sound of screams and gunfire filled the hallways when responders entered the building to confront the active shooter, a role played by the author of this article.

Hebert, who is also an Assistant EMS Director, reviewed the incident with C&CC after a group debrief with Jusino and Barry. “Everybody had a role in this,” Hebert said, and “police, fire, and EMS all worked together”. The victims, most of whom are trained first responders, also credited that the participants for working together and providing an effective response. In a small Massachusetts city with big city problems, TEMS training was a success.