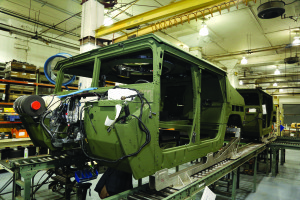 The U.S. Army at Red River Army Depot in Texarkana, TX is beginning its fourth year of a Public-Private Partnership with vehicle manufacturer AM General, Inc. to recapitalize the nation’s fleet of High Mobility Multi-Wheeled Vehicles (HMMWVs) or “Humvees” for Active Service National Guard application.

There is no doubt that a public-private partnership (P3) is a win for each organization involved. The team at River Army Depot understands that leveraging P3s will not only preserve the Organic Industrial Base (OIB), but will continue ensuring Soldiers have the quality equipment they need. This stands true in the depot’s current P3 with AM General on High Mobility Multipurpose Wheeled Vehicles (HMMWV) for the National Guard. The partnership has contracted orders totaling nearly $250 million, with a significant pipeline remaining to include $160 million in additional fiscal year 2016 funds.

AM General was awarded a firm fixed priced contract from Product Directorate Light Tactical Vehicles (PDLTV) in June of 2014 to partner with Red River Army Depot (RRAD). The scope of work required the Partnership to deliver recapitalized armored M1152 and M1165 HMMWV. The business model required RRAD to recapitalize seed HMMWV bodies, while AM General produced new HMMWV chassis. The modernization included automotive technology insertions by AM General and Red River to upgrade the chassis and upgrade the body, respectively. Examples of modernization include improved cooling system, new transmission, upgraded suspension system, increased fuel tank capacity, and improved air conditioning. As a result of these upgrades, reliability has increased significantly, safety has been improved, and vehicle performance regained, as compared to the older, fielded HMMWVs. Once the upgrades were complete, AM General finalized the integration of body and chassis at the Military Assembly Plant in Mishawaka, Indiana, to return like-new HMMWV’s to National Guard units.

“AM General is beginning its fourth year of a Public-Private Partnership with Red River Army Depot in Texarkana to recapitalize National Guard HMMWVs,” said Chris Vanslager, AM General Executive Vice President – U.S. Defense. “The Partnership has modernized more than 1,300 vehicles so far. And the Guard has thousands more HMMWVs that need the recapitalization to maintain a high state of readiness in their units.”

Through the partnership, Red River upgrades the HMMWV body from M1151 to M1167 TOW Missile Carrier configuration. Red River’s responsibility is disassembly, demilitarization of the HMMWV chassis, and HMMWV body rework using the National Guard’s guidance. The body is then placed on a specialized cart, newly-fabricated by members of Red River’s team, and shipped to the AM General plant in Mishawaka, IN where the body is married to a new chassis.

Mechanics on the depot’s HMMWV team are actively involved in every aspect of the process as seen with the fabrication of the cart used to carry the HMMWV body. The team recognized a need for a more standardized cart that not only

The HMMWVs bodies are sent to AM General’s facility in Mishawaka, In. AMG mates the reconfigured body to a new chassis and completes the vehicle assembly. AMG provided specifically designed shipping skids to RRAD for transporting the bodies. The installation of the HMMWV body to the skid was a new task for the Red River team. Prior to the innovation, the process required a forklift, an overhead crane, a large sawhorse type jack stand and three mechanics to perform this task in a dedicated workstation. At 30 minutes per unit, it was costing two hours of labor plus the equipment and floor space to accomplish. Additionally, the procedure was not optimum regarding safety and ergonomics.

The depot’s engineering facility and safety office worked hand-in-hand with Anderson and crew in designing a cart that met the production line’s requirement. The depot’s public work department seemingly fabricated them overnight. The new work cart enabled the task to be incorporated into a work station that performs others tasks as well. With an overhead crane as the only required equipment, the labor was reduced to a fraction of an hour. Ergonomically, it could only be improved if a robot performed the task.

“The newly designed work carts are a tremendous improvement and money saver,” said Russell Anderson, Chief of Red River’s Tactical Division. “Every mechanic, equipment specialist, welder, engineer, supervisor, planner, blaster and painter that was involved with this can, and should be very proud.”

“The previous cart/trailer we were using took three people to pull from one station to the next,” said Mack Anderson, leader for the HMMWV line. “The old carts were also very low to the ground so we knew there had to be a better way. So, a better way, which seemed an impossibility to some on the floor, soon became a reality through a team effort.”

On Schedule and Budget

The depot has remanufactured more HMMWVs than any other organization. Since 2010, Red River has had 275 partnership agreements, many being multiple contracts like the one with AM General. Just like most vehicles at the depot, HMMWVs are dissembled to the frame of the vehicle and then rebuilt to the vehicle’s particular configuration and statement of work. Red River currently holds a public-private partnership with AM General, the original equipment manufacturer of the HMMWV. Through the partnership, Red River upgrades the Body from M1151 to M1167 TOW Missile Carrier configuration.

“This partnership has enabled Red River Army Depot (RRAD) to provide our nation’s Warfighters with a dependable quality product, on schedule and within cost,” said Marshal McKellar, Director of RRAD’s Business Management Office. “During the past four years we’ve truly become teammates and the depot looks forward to partnering with AM General in the years to come.” Public Private Partnerships (P3s) help to strengthen the Organic Industrial Base and maintain critical skill sets within both the Army and private industry. AM General is a customer focused, reliable partner dedicated to the support of our nation’s defense industry.

AM General and RRAD continue planning to expand their relationship to strengthen the collaborative spirit of their Partnership and to demonstrate the significant value Public-Private partnerships bring to the Department of Defense.