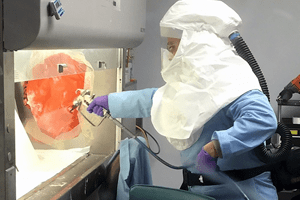 The U.S. Defense Department has identified a commercial decontaminant for field use against COVID-19.

A chemical and biological decontamination solution improved through testing and evaluation by the Combat Capabilities Development Command (CCDC) Chemical Biological Center, Aberdeen Proving Ground, MD, has been identified by the Defense Threat Reduction Agency (DTRA) as an effective COVID-19 disinfectant.

Center researchers have been working with Atomes, F.D., a company located in Quebec City, Canada, for more than two years. The Center provided testing and quality assurance to determine the general chemical and biological disinfecting effectiveness of their product, Bioxy. After conducting a literature review to examine disinfection options against COVID-19, DTRA identified Bioxy for use as an effective in-the-field disinfectant against COVID-19 and other viruses, according to Vipin

Rastogi, Ph.D., a senior research biologist at the Center.
Rastogi and his group have been testing the effectiveness of Bioxy since the beginning of the Center’s relationship with the company, which led to the DTRA-funded literature review. “Originally, the company had no idea whether it would be effective against chemical or biological agents. They were marketing it as a sanitizer and disinfectant for medical and veterinary clinics,” he said. “Our work with the company was a partnership in which we performed detailed effectiveness testing against chemical and biological agents. We were able to provide Atomes with very specific advice on how to fine tune the product so that it could provide optimal protection to warfighters and the public against a broad range biological agents, spores and viruses.”

The Center research group, led by Rastogi, determined that Bioxy works well against a wide range of chemical and biological agents, as well as the family of viruses which includes the pox virus, Feline calici virus and the Ebola virus. His team performed its testing using the Organization for Economic Cooperation and Development (OECD) Guidelines for the Testing of Chemicals. It is an international regulatory method for determining the efficacy of antimicrobial chemicals against spores, cells and viruses. The method is used by the 37 OECD member nations as well as the U.S. Environmental Protection Agency, much of industry and many independent laboratories.

“We place 10 microliters of live agent on a glass or steel test surface called a coupon, dry the agent for 45 to 60 minutes, place 50 microliters of Bioxy solution on top of that, then after a 10-minute contact period, add a neutralizer to inactivate the active components of test solution in a vial,” Rastogi explained. “The vial contents are vigorously mixed to retrieve the viable virus particles remaining off the test surface. We then perform a count of the viable organisms remaining.” The effectiveness of the disinfectant is determined by the percentage of change in the number of viable organisms in control coupons compared to those remaining on test coupons.

Chlorine bleach has long been known to be an extremely effective disinfectant; but it is highly corrosive, making it unsuited for disinfecting the sensitive electronic equipment found in military vehicles. Peroxide-based disinfectants such as Bioxy achieve a high level of effectiveness without being caustic. “The active ingredients in Bioxy break the molecular bonds in the virus,” said Rastogi. “Chemical bonds underlying the lipid virus envelope are what give the virus particle its structural integrity, so breaking them renders the virus particle nonfunctional. The active components may also destroy or break down bonds within the DNA or RNA that enables it to reproduce.”

A Powder, Not a Liquid

“Both variants of Bioxy tested, Bioxy H and Bioxy Enviro, provide many practical advantages to its military users because they are powders, and not liquids,” Rastogi said. “Bioxy, marketed as a powder, has three advantages. It’s not corrosive. You can ship it without any fire hazard precautions, and when you need it, you mix it with water and you have a ready-made decontaminant.” It works by generating peroxide when mixed with water.

While Bioxy still requires water to activate the peroxide, the amount of water needed is far less than the hundreds of gallons typically used by decontamination trucks. “We conducted a limited scale study where we tested a 5 percent solution,” Rastogi said. “If you want to translate that to ratios, 5 percent means five parts powder, 95 parts water. But if that much water is not available, you could make a 10 to 25 percent solution.”

Using Bioxy at these higher concentrations decontaminates the biological agent with no adverse effects on the Soldier. “It is safe for the skin and is biodegradable,” Rastogi said. “It decomposes to innocuous end products, oxygen and water.”

It is also inexpensive and commercially available for application to warfighters’ personal protective equipment, vehicles, and any other potentially contaminated materials in the field with far less logistical burden than hauling large quantities of water-based decontaminants.

The relationship between the CCDC Chemical Biological Center and Atomes, F.D. is the product of the Foreign Technology and Science Assessment Support Program, known as FTAS, which is funded by the Office of the Secretary of Defense. It provides seed funding for scientists to perform initial research, technology assessments and test and evaluation studies on promising defense technologies developed in other nations. Participating U.S. Army organizations, such as the Center, select foreign technology initiatives on a competitive basis. Army researchers seeking an FTAS grant submit a proposal which is evaluated by a panel of Army experts, and winning applicants are funded for one year to provide proof their technology’s effectiveness in meeting an Army need.

“Had we not formed this relationship with Atomes, DTRA would have never known about Bioxy and what a valuable broad-spectrum disinfectant it is for biological agents,” said Rastogi. “It is very satisfying to know that because of this work, the warfighter and the public have an inexpensive, non-corrosive environmentally safe and highly effective technology in hand.”

“The Center’s use of the FTAS program to contribute to the development of a new technology as useful as Bioxy is a prime example of innovation in action,” said Eric Moore, Ph.D., director of the Chemical Biological Center. “Good ideas are where you find them, and we are glad we pursued this one – doubly so because it turns out that it is proving itself to be an answer to a brand-new threat.”

DTRA is now funding Rastogi and his team to test the effectiveness of a number of other commercially available disinfectants to destroy the COVID-19 coronavirus using the OECD method.