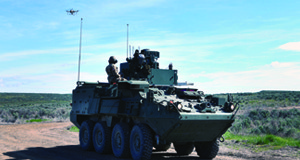 When confronted with chemical, biological, radiological and nuclear (CBRN) threats, Soldiers must rely on advanced capabilities to save lives. The quick delivery of this specialized equipment, including vehicles, sensors, sampling tools and software, requires expert collaboration and an innovative acquisition process. Time is of the essence on the battlefield.

In late 2018 and early 2019, the U.S. Army Combat Capabilities Development Command (CCDC) Chemical Biological Center and the Joint Program Executive Office for Chemical, Biological, Radiological and Nuclear Defense (JPEO-CBRND) embarked upon a collaborative modernization effort to enhance the capabilities of the main vehicle used by CBRN Soldiers – the Nuclear, Biological and Chemical Reconnaissance Vehicle, or NBCRV.

Using a new acquisition process to accomplish the upgrade of the sensor suite package on the NBCRV allowed the collaborative team to experiment with rapid prototyping and test early opportunities to quickly deliver the capability to the Soldier. The new process followed the model developed by the Army Futures Command’s Army Modernization Priorities in late 2017, which lead the Army to undertake a series of modernization and acquisition reforms aimed at promoting efficiency and cost-effectiveness.

The modernization of the sensor suite package incorporated six specialized chemical agent sensors into one uniform package, bringing the NBCRV sensor capabilities up to date with current technologies and ultimately readying the NBCRV for modern Army maneuver support. The upgraded sensor suite package will help reduce Soldier exposure to CBRN threats because it will perform remote and on-the-move detection.

“At its core, the current NBCRV is 23-plus-year-old technology and in that 23 years technology has grown and developed, but so have the threats,” explained Lt. Col. Jeffrey Strauss, JPEO-CBRND Joint Project Manager for Reconnaissance and Platform Integration. “Due to its wide usage among the CBRN community and our mission to support CBRN Soldiers, developing a suite of sensors that met modernization and readiness expectations of the U.S. Army was our goal.”

Instead of using the traditional approach, the acquisition process became streamlined through a modified work order (MWO), allowing equipment to be modified after fielding. JPEO-CBRND used the MWO as the NBCRV fielding took place 23 years ago. This process lead to expedited acquisition to meet the Army’s capability and readiness standards through rapid prototyping.

Pivoting away from the traditional programming, this process involved a series of steps before product development, including material solution analysis, prototyping, technology maturation and risk reduction. Strauss reflected on the streamlined acquisition by adding, “The rapid prototyping on this project allowed us to get the project to the Soldier, then quickly figure out what didn’t work, so the team could learn early, find solutions and press forward.”

The timeline was aggressive. In just 150 days, the team of teams would design the package, procure the sensors, develop the software, assemble the prototype and test all components internally before presenting six complete sensor suite upgrade prototypes to stakeholders at Joint Warfighting Assessment (JWA) 2019.

“Our goal is to support the warfighter by delivering the best equipment, at the right cost, and at the right time,” said Douglas Bryce, Joint Program Executive Officer. “This means looking at our acquisition approach and deciding on a path that best meets these goals. For the NBCRV SSU, switching from a traditional acquisition strategy to one of rapid prototyping made the most sense and, as we saw at JWA 19, was a successful approach.”

“The nature of the project was so intense because we quickly needed to address the changing and evolving threats on our adversaries’ side through a faster and leaner acquisition process to prepare early for the potential CBRN threats,” said Joel Gwinn, JPEO-CBRND Capability Set 2 project lead.

Selecting the right team for the project proved critical to its success. JPEO-CBRND led the new acquisition process and served as project lead, while members of the U.S. Army CBRN School at Fort Leonard Wood provided insight on the future mission that would help drive the sensor integration, fabrication, and software support provided by the Chemical Biological Center.

With a path forward and a razor-thin timeline to develop working prototypes ready for testing the following April, teams got to work.

Using the new acquisition process customized and implemented by JPEO-CBRND, the Center partnered with the Defense Production Agency Joint Technology Office to determine what was physically achievable when developing the SSU using a combination of knowledge of current and future technology. At the same time, the Defense Threat Reduction Agency (DTRA) worked to design potential alternatives for technologies and determined if the new technologies met military requirements, once developed.

An innovation in this project involved the use of augmented reality. The Center used a Microsoft HoloLens to see the current NBCRV with digital holograms overlaid on top of the vehicle. Together, subject matter experts from the science and technology, acquisition and academia communities used the lenses to observe the new design before it was created, thus creating a mechanism for experts in all fields to collaborate using the early opportunity to address issues, fix them and get the final product to the Soldier.

To achieve the Army’s goals of readiness and modernization, JPEO-CBRND assessed available technology to upgrade the sensor suite package on the NBCRV allowing it to autonomously perform reconnaissance. As part of this process, JPEO-CBRND also faced the challenge of identifying technology suitable for all CBRN sensors given chemical, biological, radiological and nuclear agents are not built and created the same.

Using the identified technology, a team of engineers at the Chemical Biological Center, part of the NBC Battlefield Integration Branch, developed the complex software required to allow Soldiers to operate all of the new sensors, the Deep Purple Unmanned Aerial Vehicle (UAV) and the technology that would translate all the data from those sensors to usable information for the Soldier and the chain of command.

Maxwell Bottiger, and a team of software engineers at the Center, worked to develop the user interface and auto-piloted software Soldiers would use from inside the NBCRV to run reconnaissance missions, interrogate potential chemical threats and provide useful information back to leadership and to other troops.

To develop the housing and layout of the sensor package, the team looked to the Center and its rapid prototyping capabilities to address challenges.

“With the goal aimed at developing a proof of concept for the Army to sink its teeth into, we challenged ourselves to think like an operator,” said Peter Bryant, industrial specialist at the Center. “In doing so, careful considering was taken for sensor placement around the vehicle — that they all worked in concert with each other — so the entire package met the needs of the Soldier.”

“The rapid prototyping capabilities of the Center are a real asset to not only Center researchers but to our partners,” said Moore. “The ability to design and fabricate something brand new or make an improvement on a current technology makes us agile and highly sought after, especially as new acquisition projects like this one become more common.”

“This rapid prototyping approach, along with working closely with the maneuver community, is a great example of how we can operationalize technologies on behalf of the warfighter,” Moore added.
Strauss agreed. “As a government facility, the Center was able to leverage government labs, was familiar with core technology, was more able to adapt to change and had previous experience with sensor suite technology,” he said.

VIP Day served as the first touchpoint for the team of teams in development of the sensor suite upgrade. With the sensor suite at 85 percent completion, the team tested the new technology in front of senior executive leadership across JPEO-CBRND, the Center, the CBRN School and DTRA. Using the feedback received, the teams made adjustments to the structure and layout of the sensors in preparation for the second test at JWA 19.

Strauss felt very positive with the overall outcome of VIP day. “The collaboration was exposed to the next layer of management, showing what collaboration and teaming could do in a short amount of time,” he said. “VIP day got the stakeholders to continue to want to partner with JPEO-CBRND and CCDC Chemical Biological Center. The consensus was this was an unprecedented leap forward in capability.”

Training at the Fore

The Alabama National Guard (ANG) sent a team of Soldiers to train on the operation of the NBCRV and the new sensor suite package in preparation for the Joint Warfighting Assessment 2019 (JWA 19), held at Yakima Training Center, WA last Spring.

“JPEO-CBRND chose the ANG Soldiers because a team was needed that wasn’t familiar with the system. This allowed us to train them sufficiently, which demonstrated the usability of the system,” explained Dale Perry, JPEO-CBRND field operations lead for the NBCRV Team.

Once the Soldiers began training on the system, development teams transitioned to a training and support role, eliciting feedback and incorporating specific changes to the system. The Soldiers spent one-month training at the Center to operate the vehicle and its sensors effectively.

To ease the pressure of training on several brand-new systems, Center engineers transferred the same software from inside the NBCRV onto tablets. The Soldiers trained in a classroom using the tablet simulators before stepping in the vehicle which allowed for early Soldier feedback. “Working closely with Soldiers made the changes to the software turnkey,” said Bottiger.

“We received Soldier feedback one day and by the next training session, their feedback was incorporated into the training simulator,” Bottiger said. “By the time the Soldiers were heading to JWA 19, they were well trained and ready for the assessment.”

Center and JPEO-CBRND subject matter experts (SMEs) attended the training sessions to field questions and troubleshoot issues with the Soldiers, something Sgt. Chantelle Colbert appreciated. “SMEs were on-site to replace software and walk us through processes so we could learn to troubleshoot independently,” Colbert said.

“During the training in Aberdeen, if we found anything that could have been improved, or anything that could help the systems or help the Soldier’s ease of use with the systems, SMEs were on the spot to make those changes,” said Sgt. Brittany Mattison, 690th Company. “They made so many changes and improvements to the systems in just that short amount of time, and it is really amazing to see. As a Guardsman, you don’t really get to see or do this type of stuff often, so it was a privilege.”

Based on feedback from the SMEs involved, the NBCRV’s JWA 19 debut ran smoothly, performing well in all scenarios in the demanding landscape of the Yakima Training Center in Washington.

Moving forward, the team will assess how the vehicle performed, make refinements and provide guidance to contractors working on Capability Set 2, which will make improvements to the first iteration, all in preparation for JWA 20 in Poland.

“We know what we know about the adversaries and, based on lessons learned through the development of the original sensors, we know what our gaps were with the old systems,” said Gwinn. “The collaborative process will continue while adhering to another fast timeline during the development of Capability Set 2 with the goal of fielding the SSU in 2022.”

The Army must also use current information to predict possible future CBRN threats and use that knowledge to make additional technological advancements to the sensor suite. Beyond that, improvements to increase the speed of maneuver, increase adaptability to different environments, increase capability for stand-off detection and create a more deliberate system are important goals for the team to meet.

With CBRN threats evolving quickly, it is imperative Soldiers receive advanced capabilities to address the threats and protect themselves. In order to recognize, research and produce these capabilities, JPEO-CBRND, the Center and industry partners must continue to use the rapid prototype acquisition process and collaborative team model. Timeliness, accuracy and efficiency remain the most important components in getting capabilities to Soldiers.