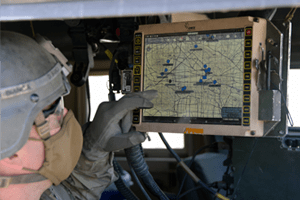 “As a result of these simplified services, our on-the-move platforms and command posts have a fully compatible, simplified, and seamless framework with less complexity that facilitates our PACE (primary, alternate, contingency, and emergency) communications plan for our mounted and dismounted Soldiers’ speed and reach,” said Azap.

At the core of MCE, MMC-S leverages the proven, Army investment – the JBC-P hardware and network – and will be deployed as a simple software-only upgrade to replace JBC-P software. The MMC-Software will exploit the transport and hardware capability-maturation, continuously enhancing capabilities, security, and network resiliency that outpaces adversarial countermeasures and threats as the service continues modernizing tactical network technologies through iterative Capability Sets (CS).

The DevOps partnership between PM MC and the 11th ACR is critical as MMC-S executes activities leading to a Limited Deployment Decision on the first iteration of Software in 4QFY22. MMC-S will go through a Limited User Test and CS23 Operational Demonstration in 3QFY22 in order to equip the Army’s CS23 target unit, 2nd Cavalry Regiment, beginning in 1QFY23. MMC-S will then shift development focus to integrated platforms – Strykers, Abrams and others – for the next iteration of software targeted for CS25 fielding.

To achieve these goals, MMC-S executes an agile software development process that allows for the deployment of new capabilities to the Operational Force approximately every 12 months. Throughout the development of each software iteration, DevOps partnerships enable tailor-made refinements based on Soldier feedback. During the Blackhorse Stakes Regimental Training, 11th ACR Soldiers leveraged MMC-S while conducting troop leading procedures, maneuver lanes, drivers’ training, logistical resupply, communication at echelon, combat-lifesaver training, and medical evacuation training. Feedback from these efforts results in the delivery of fine-tuned capabilities Soldiers require for operational use.

“We’re using MMC-S from the Platoon Sergeant level up to Squadron Commanders to populate the COP, share our left and right limits, and increase understanding of the battlespace,” said Captain Jonathan DiBianca, E Troop Commander, 2nd Squadron, 11th ACR. “[DevOps] is great, especially in the crawl stage of using MMC-S where we can work out the kinks before rolling this out to a wider audience. Being able to work one-on-one with the program office and the developers to take what works and refine what doesn’t, helps create a system that modernizes us across the force and helps us remain at the tip of the spear.”

One of the most touted enhancements of MMC-S as compared to JBC-P is the graphical user interface. As an Android-based software program, MMC-S leverages the Android Tactical Assault Kit (ATAK), which provides a common look and feel to something Soldiers already use every single day: a cell phone.

“Technology plays a big role in today’s day and age. We all have a cell phone in our pocket. Whether it’s an iPhone or Android, they all kind of have the same premise,” said DiBianca. “Having young Leaders coming out of basic training that are able to utilize their understanding of a cell phone and effectively employ MMC-S is incredibly valuable and goes a long way in maximizing our effectiveness using this capability.”

Perhaps even more critical is an improvement below the surface of the software’s upgraded look and feel. In technical terms, Nett Warrior, the Handheld Computing Environment (HHCE), primarily communicates using Cursor-on-Target and protobuf message formats while other tactical Army systems, including Command Post Computing Environment (CPCE), Advanced Field Artillery Tactical Data System (AFATDS), and systems on the Blue Force Tracker (BFT) network, interoperate using Variable Message Format (VMF). MMC-S digests both CoT and VMF, and is being built to translate and communicate using either format to link the HHCE to CPCE, which is something that JBC-P software is not able to do.

“MMC-S is critical to modernizing the force. It will serve as the convergence space to meet the Army’s requirement to host WfF capability in order to deliver a fully-integrated COP – something that JBC-P falls short on,” said Frizzell. “The bottom line is that MMC-S is the bridge between all three computing environments. It increases interoperability between CPCE and Nett Warrior, which is essential to generating an integrated COP.”

“What’s unique about this series of Warfighter Exercises is that the training audience was different for each iteration,” said Lt. Col. Shawn Chu-Quinn, Product Manager for Tactical Mission Command (PdM TMC). “What that means for us as a product office is that we get to collect feedback from three different operational perspectives, which allows us to fine-tune the capability and deliver focused improvements.”

CPCE, along with the handheld and mounted computing environments, provides an easy-to-use common operational picture (COP) through a single mission command suite operated and maintained by Soldiers. CPCE provides a software and server hardware framework (common interface, data and services) upon which warfighter applications can be converged and future applications can be built. To date, Project Manager Mission Command has fielded CPCE software to 87 operational units and training organizations, which includes multiple Mission Training Complexes and centers of excellence (i.e. Cyber, Fires, and Aviation).

While the DevOps model is not new, leveraging it across an audience this broad is a first for the program. Historically, the DevOps process for CPCE has involved working in-depth with a single unit at a time, typically for a period of several weeks, and making tweaks to the system as a result of Soldier input. This go-round, program developers worked with the training audience to identify which CPCE software version would be most suitable to carry out their mission in their respective WfX.

During WfX 21.1 in October, in which the primary users were elements of the XVIII Airborne Corps, 82nd Airborne Division and 1st Cavalry Division, units used the latest CPCE DevOps software, known as Increment 0, or Inc. 0. Using this version, Soldiers indicated the need for feeds from unmanned aerial systems (UAS) to enhance the commander’s command post purview, as well as the ability for the G6 to remove a CPCE user if needed.

“Once users identified the need for these improvements, the product office immediately addressed the UAS request and incorporated that change for future software improvements,” said Justin Seehusen, Assistant Product Manager for Tactical Mission Command.
According to Seehusen, the remaining requests underwent an assessment to determine the technical level of effort, traceability to requirements and the resources available for execution. The assessment identified a total of 10 categories or areas of improvement and determined it will take approximately eight weeks for software improvements, followed by a 30-day work period to undergo and series of test-fix-test and risk reduction events to determine whether those improvements are ready for operational use.

During WfX 21.4 these improvements were put through the paces. XVIII Airborne Corps users executed their mission and provided additional feedback for future enhancements. Initial feedback indicates CPCE meets all minimum requirements, allowing the Army to focus on improving the user experience for future versions.

Following WfX 21.4, Soldiers with the 4th Infantry Division (4ID) at Fort Carson, CO, and I Corps at Joint Base Lewis-McCord, Washington, will utilize CPCE as part of JWA 21 in June, during which a formal Operational Assessment will be conducted using the current Increment 1, or Inc. 1, CPCE software baseline. During the lead up to the exercise, PdM TMC executed a “crawl, walk, run” phased approach with the units to allow users to gain maximum proficiency and provide feedback on the currently fielded CPCE baseline prior to executing the multinational JWA event.