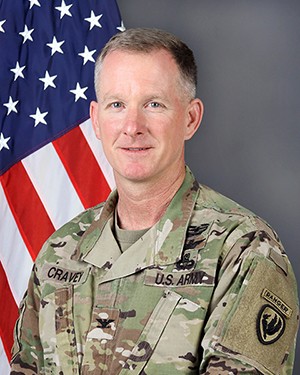 Colonel Paul A. Cravey is currently serving as Director, TRADOC Capability Manager for Reconnaissance and Attack, Fort Rucker, AL. Commissioned a Second Lieutenant in Aviation from North Georgia College, Colonel Cravey began his professional career in 1992 as an Aviation Support Platoon Leader and Aeroscout Platoon Leader in Fort Hood TX and Camp Eagle, Korea. Following completion of the Aviation Officer Advanced Course in 1995 he was assigned to the 82nd Airborne Division, Fort Bragg North Carolina and served in a variety of assignments including command of Crazyhorse Troop, 1st Squadron, 17th Cavalry. After completion of a tour at the National Training Center in Fort Irwin, California and the Army’s Command and General Staff College, he was assigned to the 25th Infantry Division, Schofield Barracks, Hawaii and immediately deployed to Taji, Iraq where he served for six months as an operations officer. In 2005, he deployed to Kirkuk and Tikrit Iraq where he served for 15 months in both ground and aviation assignments in support of Operation Iraqi Freedom. In 2009 he was deployed to Kandahar Afghanistan with the 82nd Airborne Division for one year to serve as a Security Force Assistance Team Leader for the Afghan Border Police. From 2011-2013, Colonel Cravey served as the Commander of the 1st Squadron, 6th Cavalry Regiment at Fort Riley Kansas, and followed that with a one year assignment as the operations officer for the Brigade Modernization Command at Fort Bliss, Texas. Colonel Cravey is a graduate of Embry Riddle Aeronautical University and the U.S. Army War College where he earned an MBA and Masters of Strategic Studies respectively.

COL Cravey: I oversee a directorate responsible for Reconnaissance and Attack capability development for the Army. Specifically, we develop and manage doctrine, organization, training, material, leadership and education, personnel, facilities and policy (DOTMLPF-P) solution sets in support of manned and unmanned Attack and Reconnaissance programs in addition to the Army Aviation Lethality Strategy. My team works with capability developers, material developers, test and evaluation personnel, Army commands, units assigned Attack and Reconnaissance systems, and Department of the Army and Joint Staffs on issues influencing the organization, fielding, deployment, and sustainment of Reconnaissance and Attack systems.

A&M: From an Army-specific focus on autonomous systems development and integration, speak to some of the key focus areas that your office is working on.

COL Cravey: Three of our major lines of effort are interoperability, lethality and survivability.We are working to increase interoperability between manned and unmanned aviation reconnaissance and attack platforms. Our future goals for interoperability are to streamline the sensor to shooter connection through federated linkages that reduce pilot and operator workload and to develop integrated solutions that will link future aircraft and sensors to promote cross cueing and cross domain fires. We want to make the feed that UAS delivers accessible to everyone who can impact the fight. We plan to do this through facilitating supervised control of UAS to the user level by leveraging a Scalable Control Interface (SCI). Levels of autonomy will differ based on the platform and mission set; there will always be a “man in the loop” for all platforms in a supervisory capacity, but specifically for reconnaissance and attack missions. Our primary goal in lethality is to increase the UAS stowed kill capacity in support of ground force commanders through smaller form factor, tailorable, lethal munitions. Currently commanders are fighting a battle of endurance vs. stowed kills and we want to balance that equation. The primary goal with an increase in survivability is to better harden our systems to survive and fight effectively against emerging threats on the current battlefield as well as in the future Multi-Domain Construct where they will face a significant Anti-access and Area Denial (A2AD) threat, GPS denial & intrusion and Electronic Warfare Attack.

A&M: In terms of Army partnering in a Joint, Multi-Domain interoperable environment, speak to how TRADOC is focusing on opportunities to advance capabilities fielding.

COL Cravey: We are currently developing a future family of UAS that is partially informed by the programs that our Sister services develop. We are taking advantage of opportunities to collaborate for common technology to the maximum extent possible. For example, our future Scalable Control Interface for UAS must have the capability to interface with Joint UAS platforms, integrate Fires and CEMA from Joint Forces, and must operate on a network that supports Join communications. We’re seeking to leverage work done by USMC in support of their MUX requirement to shorten the development and fielding timeline for Army UAS systems and may find some Joint solutions as we further develop Army UAS requirements.

A&M: From an industry partnering perspective, how is TRADOC working to partner with industry to better facilitate contract efforts for increased concept to field outcomes?

COL Cravey: I’m not in the contract arena, that’s our partners at the Project Management (PM) level. We focus on requirements and finding the best technology to meet those requirements. We partner with industry for development of future systems. My team spends a great deal of time laying out the capability gaps and researching potential solutions. For example, In addition to continuous industry engagements, last year we held a ‘shark tank’ style two day session at the AUVSI symposium open to anyone in industry to pitch any UAS related technology they thought might be applicable to our mission set. We then provided open feedback on their ideas and technology. Some of those pitches really caught our attention and garnered follow up. When we have the need to fill a gap and specifics on the parameters we’ll work with the PM who will release RFIs and RFPs to industry to attempt to meet those gaps with their particular solutions. Specifically we are currently focused on

capability with endurance for UAS and future weapons that have extended range capability and are tailorable beyond our currently fielded inventory.