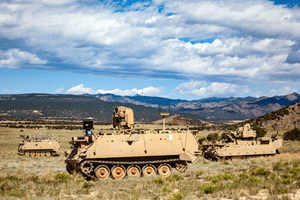 Far too often in the acquisition lifecycle of old, the Army relied on top-down leadership to drive innovation and deliver capabilities to Soldiers. This reactive mindset has led to obsolete tech reaching warfighters years after the cutting-edge curve, resulting in critical capability gaps against peer adversaries. Now, in the age of iterative and continual network modernization, collaboration from the bottom up is building product office partnerships. One such partnership between the Program Executive Office for Command, Control, Communications-Tactical (PEO C3T), PEO Intelligence, Electronic Warfare and Sensors (PEO IEW&S), and PEO Ground Combat Systems (PEO GCS) is tearing down turf wars and providing a next-generation communications capability across the service’s vehicle fleet.

Currently, more than 100,000 platforms in the Army are equipped with the Joint Battle Command-Platform (JBC-P). Since fielding began in 2015, JBC-P and its four components – the computer (and installation kits), software, transport hardware (antenna transceiver and encryption device) and the network it leverages – have been the cornerstone of the Joint Force’s command and control and situational awareness communications.

Each stakeholder with a piece of the JBC-P pie has now set its sights on development of the system’s follow-on capability – Mounted Mission Command, or MMC.

SYNCHING COMMAND AND CONTROL WITH MOBILITY

MMC has brought together PEO C3T, PEO IEW&S and PEO GCS to collapse various stovepiped capabilities from each portfolio onto MMC software. MMC provides all the movement and maneuver applications but also supports needs of the wider community and warfighting functions (WFF) – integrated common operational picture, intel, fires, medical, logistics, and third-party applications providing additional functionality through a converged software architecture and infrastructure. Convergence partners leverage MMC infrastructure and services to develop WFF capabilities without having to build a complete system from the ground up, resulting in streamlined integration, hardening, accreditation and critical capabilities delivered to the warfighter rapidly.

The effort is taking the network expertise of Product Manager (PdM) JBC-P, the sensor know-how of Product Manager Mounted Position, Navigation and Timing (PdM Mounted PNT), and the platform proficiency of PdM Vehicle Protection Systems (VPS) with the intent of converging data feeds from currently separate systems onto a single, common user interface within MMC.

“The Army recognizes that there is not one single, silver bullet of a survivability technology that’s going to protect the service’s combat platforms against all threats but rather a series of layers of multiple capabilities to address multiple threats,” said Lt. Col. Daniel Ramos, Product Manager for Vehicle Protection Systems.
As a result, PdM VPS was stood up in 2018 with a focus of looking at vehicle protection capabilities for the enduring and future vehicle fleet, and supporting each with layered capabilities..

MMC’s layered capability delivery includes two critical improvements over its predecessor – the use of smart routing and sensor fusion to identity and pinpoint potential network threats, communications interruptions and areas of denied connectivity. Similar to the multi-path diversity afforded by Integrated Tactical Network capabilities, MMC’s encryption device will enable multiple different transport means and leverage both existing and emerging pathways to ensure users have multiple communications options when their network is limited or denied.

Software is not only the backbone of MMC capabilities but also the connecting link between each stakeholder involved in its development. From early on, each product office placed increased emphasis on providing the right messages in the right formats through an iterative process. Within the last month, acquisition professionals and subject matter experts have stood alongside Soldiers from the 3rd Armored Cavalry Regiment to test MMC prototypes at White Sands Missile Range (WSMR) and refine functionality based on direct user feedback. This collaboration and Developmental Operations (DevOps) environment is providing a more in-depth graphical user interface so Soldiers can understand what is going on in their PNT environment. Through DevOps at WSMR, PM PNT has been able to show more in-depth PNT data to users through MMC. Future PNT enhancements may include a “heat map” within MMC to pull in data from various sensors and physically show where users can expect to be jammed.

Despite a lack of mission overlap between each PEO involved, MMC collaboration capitalizes on several other areas of commonality. This convergence can save the Army money and save Soldiers space inside their vehicles. Additional convergence opportunities are being pursued within the U.S. Army Combat Capabilities Development Command’s C5ISR Center, leaning on existing partnerships between acquisition and science and technology offices.

“Ultimately, Soldiers aren’t concerned about the name of a vendor developing a piece of equipment or the product office delivering it,” said Lt. Col. Alexander Rasmussen, Product Manager for Mounted PNT. “They just want it to work. They want to be able to execute their mission with a capability that keeps them one step ahead of their adversaries.”

MMC, its ancillary devices and the network it leverages must enable Soldiers to shoot, move and communicate, and bring fires on the enemy. Collaboration within the Army’s modernization enterprise is making that a reality by focusing on what makes sense for the service and not for individual programs. That foundation has laid the groundwork for MMC to enable commanders and Soldiers on the battlefield and for future capabilities in tomorrow’s fight.

MMC will see additional DevOps throughout FY21 as part of the program’s incremental Initial Operational Test & Evaluation (IOT&E) test strategy, and a Limited Deployment Decision (LDD) is slated for 3QFY21.