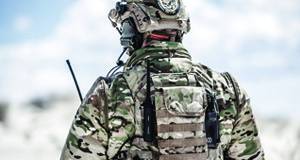 Individual attention to providing each soldier with the tools, skills, weapons, and technologies necessary to succeed has made America’s military the most effective and capable in the world. Unfortunately, this granular focus on every single soldier doesn’t extend to situational awareness. That’s because our military doesn’t really have the ability today to see exactly where every single soldier is located.
Why does the world’s most advanced fighting force lack this level of insight and awareness?

Today’s military-grade radios are incredibly adept at delivering connectivity, advanced communications capabilities, and situational awareness for the military. But they’re large, difficult to use, — and often, extremely expensive. Ultimately, not every soldier can bear having a giant radio or a full satellite terminal on their back. And the military can’t afford to give them all one. So, with logistics and cost control in mind, the military has elected to predominantly distribute these radios to team leaders. But that prevents command from having a truly accurate, individual soldier level of awareness of the battlefield.

Here are some examples of the kinds of trouble that can be caused:

One Soldier, One Node

There is a solution that can give military leaders a better, more granular level of detail in their situational awareness: goTenna Pro. goTenna Pro’s advanced mobile mesh networking solutions are significantly less expensive (less than 10 percent of the price of larger, military-grade radios) and extremely small. This means that they can be deployed to each and every individual dismounted soldier.

When utilized, the mesh node connects with a warfighter’s end user device either via a physical USB tether connection or low-output Bluetooth. It requires no existing infrastructure or network hardware be implemented or installed. All location and messaging data is then displayed in compatible mobile apps like ATAK, delivering soldier-level situational awareness. Since each mesh node effectively accepts and then rebroadcasts the signal to other nodes, by simply attaching a node to any number of military platforms – such as weather balloons or unmanned aerial vehicles (UAVs) – coverage can extend to a wide geographic area.

With goTenna Pro’s mobile mesh networking solution, there is no reason for only brigade-level or unit-level situational awareness when transparency can be enabled down to the individual warfighter.