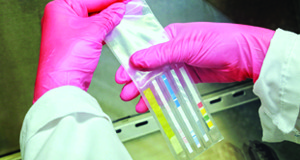 When it comes to chemical and biological detection in the field and individual detection instruments adding as much as ten pounds or more to a Soldier’s already full pack, keeping these requirements to a minimum can make a very big difference.

U.S. Army Combat Capabilities Development Command Chemical Biological Center scientists Jennifer Sekowski, Ph.D., and Kelley Betts wanted to know if there might be a better way. Could something small, lightweight, power-free and inexpensive perform as well as traditional detection equipment, but also be small enough to fit in a Soldier’s pocket?

The idea for the Pocket Detection Pouch (PDP) came about when Betts, a scientist and an Army wife, began to question why so many biological detection technologies require tubes or cassettes to operate. With the average Soldier carrying at least 60 pounds of equipment, Betts understood that every ounce added to a Soldier’s gear matters, and wondered – was there a way to put a combination of both chemical and biological detection technologies into something lightweight and cheap, like a plastic bag?

“I questioned the traditional paradigm that threat agents can only be analyzed using a test tube or cassette,” said Betts. “I wondered if we could test using something different, like perhaps a pouch.”

To make it work, the pouch had to be designed with a one-way flow so that a single liquid sample could be squeezed into individual compartments, each containing a unique detection test. Also, because the device was designed to require no power to operate, any test results would have to be colorimetric and readable by eye. After a lot of trial and error, an assortment of heat sealers and plastic bags, and a very messy kitchen, a prototype for the Pocket Detection Pouch, or PDP, was born.

The idea for the pouch was further developed when Sekowski proposed the technology to the Chemical Biological Center Innovative Development of Employee Advanced Solutions (IDEAS) Program, where she was awarded $65,000 and six months to develop the technology to simultaneously test for the presence of synthetic opioids and chemical agent by using lateral flow immunoassays as well as M8 and pH paper-based assays.

The IDEAS program was started in 2012 to award seed money to Center researchers with promising ideas. Under this program, Sekowski, Betts, and colleague Dan Angelini, Ph.D., who is experienced in sample collection, further refined the Pocket Detection Pouch’s design to be about the size of a credit card when folded and also included a variety of sampling devices that could be tailored to different user requirements. They also made the outer layer of the pouch out of a thicker plastic bag material to provide a better level of containment.

The PDP is made to easily fit inside a Soldier’s pocket, and at less than half an ounce, is so lightweight it can be carried anywhere without adding to a Soldier’s already heavy load. To use the device, a sample of suspected material is placed inside the primary compartment where water or a buffer is added. The liquid is then squeezed down into the individual testing lanes containing the individual colorimetric tests.
After about 10 minutes, if a color change occurs, the yes/no results are compared to a key card included in the pouch and the Soldier can immediately alert his or her commander whether more determinative sensors need to be brought to bear. The PDP is designed to provide presumptive identification of agents in the field, but is also designed to store a sample for any needed follow-on testing.

Under the 2019 IDEAS program, the PDP was successfully shown to detect the presence of synthetic opioids and chemical agent, but Sekowski and Betts don’t want to stop there. They hope to adapt commercial DNA-based biological detection, as well as existing up-and-coming paper-based explosives, chemical, and radiological detection methods into the PDP to provide what they refer to as “the full CBRNe” in one shot.

Sekowski and Betts would also like to develop the PDP for wide area surface sampling by connecting the PDP with the Mano, a one-handed wide area environmental surface sample collection device developed at the Center. The Mano was designed to simplify sampling while wearing mission oriented protective posture (MOPP) gear in hazardous environments. By attaching the PDP to the Mano, immediate testing of samples in the field could be performed to help soldiers and their commanders make immediate operational decisions, as well as allow for follow-on testing of those samples back in the laboratory.

The PDP was championed by Sgt. 1st Class Robert Olson, the Center’s technical noncommissioned officer. “It is imperative that the warfighter is included in the beginning idea stage,” said Olson. “Doing so allows researchers to learn directly from the warfighter how their idea can improve the overall performance of the Soldier’s mission.”

Additionally, Carrie Poore, Ph.D., the Center’s Advanced CBRNE Training Branch chief, was able to get the pouch into the hands of National Guard Soldiers taking courses offered by her branch. The Soldiers provided valuable constructive feedback to help refine the PDP’s practicality and design. For example, they suggested adding a strip of tape to both sides of the sample holding compartment at the top of the bag so that someone in the field wearing protective gear could collect the sample using heavily gloved hands.

The six-month IDEAS grant period ended in October. Now Betts and Sekowski are looking for outside funding to expand the capabilities of the pouch. They have had discussions with the Joint Product Manager for CBRNe Detection, the U.S. Army Public Health Command, the Department of Homeland Security and the U.S. Department of Agriculture to further explore the device’s applications.

By reducing size, weight, power, cost, training and disposal requirements, the scientists look forward to a future in which every Soldier has the ability to presumptively assess potential CBRNe threats with an easy-to-use device that can be carried in a pocket. As Sekowski and Betts like to say, “Maybe it’s time we think outside of the tube.”