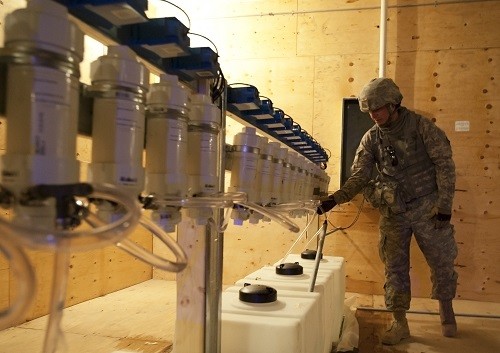 The 20th CBRNE Command demonstrated its readiness, agility, and adaptability during Exercise Atropian Phoenix this summer.

“Our biggest challenge was forming a coherent battalion task force out of units that came from four different installations and the Republic of Korea Army,” said Lieutenant Colonel Brant Hoskins, commander of the Joint Base Lewis-McChord-based 110th Chemical Battalion (Technical Escort), who led CBRNE Task Force 110 at Fort Irwin, as the live component of this first-of-a-kind exercise. “We were able to overcome this challenge by executing seven days of situational training exercises prior to conducting the force-on-force part of the rotation.”

Hoskins said his CBRNE task force tackled some tough scenarios. “The scenarios that we encountered at the NTC were very realistic and challenging,” said Hoskins. “The enemy, the environment, and the operational tempo gave my soldiers the opportunity to practice their craft in very tough conditions, which will ultimately serve them well if they have to do it in combat.”

“The exercise forced the CBRNE task force to effectively integrate with maneuver and other supporting units to conduct a coherent counter WMD (weapons of mass destruction) campaign,” he continued. “We see this as the wave of the future for our formations.”

According to Colonel Sven Erichsen, the 48th Chemical Brigade commander, the exercise enabled his Fort Hood, Texas-based brigade to serve as an integrated CBRNE headquarters, connected to both the 20th CBRNE Command headquarters in Maryland and his deployed troops in California. “Atropian Phoenix improved our ability to operate as a CBRNE Brigade Task Force by allowing us to train with a set of enablers—communications capabilities, technical capabilities— that we don’t have organically in a normal chemical brigade command post,” said Erichsen.

Erichsen added that the inclusion of a CBRNE Coordination Element (CCE) greatly improved his ability to command integrated CBRNE operations. “Its complement of intelligence, EOD, nuclear, and CBRN hazard prediction experts really gives us the capability to function as a CBRNE headquarters,” said Erichsen, who is from Forest Grove, OR. “With the CCE, we gain the analytical ability required to plan future WMD elimination operations, as well as additional specialized EOD and nuclear capabilities for current operations,” said Erichsen.

The Aberdeen Proving Ground, MD-based CBRNE Analytical and Remediation Activity, known as CARA, a U.S. Army activity made up of civilian scientists, validated its Heavy Mobile Expeditionary Laboratory (HMEL) during the exercise.

Inside the laboratory tent on Fort Irwin, eight civilian scientists from CARA tested environmental, chemical, biological and explosive samples that were collected during simulated combat operations. “This was the HMEL’s validation exercise and the first deployment to the National Training Center at Fort Irwin,” said CARA Director Christopher K. Chesney.

“This event encompassed tactical, operational and strategic decision making while concurrent intelligence preparation of the battlefield continued in order to mitigate future enemy operations, enabling freedom of maneuver and ultimate domination of the operational environment.” Dunn said the 20th CBRNE Command fills a unique and crucial role in defending the United States and its allies. “[20th CBRNE Command] troopers are a highly adaptive and agile force comprised of a rough, tough, and ready group of men and women who knowingly place themselves directly in harm’s way for the safety and security of others,” said Dunn. “What they do must be done, and they are the ones to do it.”

Brigadier General JB Burton, the commanding general of 20th CBRNE Command, said his command tested portions of its emerging concept of operations, including the inclusion of regionally aligned, integrated CBRNE units, during the exercise.

“The complexity of Atropian Phoenix was a highlight in and of itself,” said Burton, who leads more than 5,300 Soldiers and civilians in two Explosive Ordnance Disposal Groups, one Chemical Brigade and the CBRNE Analytical and Remediation Activity, from his headquarters here. “Atropian Phoenix demonstrated this command’s ability deliver and effectively employ tailored, integrated CBRN and EOD formations in support of a very complex operational environment,” said Burton. 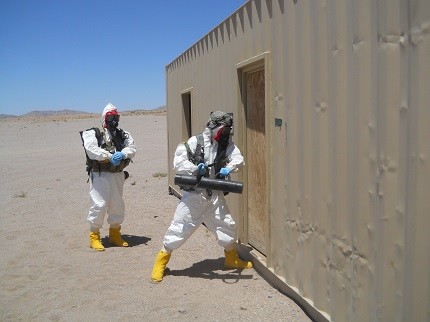 “We have upped the complexity ante in partnership with the leadership of the Combat Training Centers by introducing the full range of CBRNE hazards our soldiers may be exposed to on the battlefields of today and tomorrow—from improvised explosive devices to chemical and biological laboratories producing weaponized toxins to radiological facilities and counter-proliferation opportunities,” said Burton.

According to the commander, the Fort Irwin-based task force collected, evacuated, and transported physical and spectra samples from the NTC to Edgewood for further analysis.

Burton said 20th CBRNE Command Nuclear Disablement Teams also trained to eliminate radiological threats at one of the recently constructed CBRNE training sites at the National Training Center. “We employed one of our Nuclear Disablement Teams against a fullscale radiological target,” said Burton, adding that his command also fully employed its capability to reach back technically to joint and interagency experts during Atropian Phoenix.

“We were also able to fully exercise this command’s Operational Command Post and Joint Technical Analysis and Intelligence Centerat Aberdeen Proving Ground to validate our ability to fully enable our forward deployed forces with the technical reachback to the various agencies that represent the CBRNE community of purpose, so that our CBRNE Task Force could better exercise command and control of their attached CBRN and EOD formations, while advising and assisting their supported brigade combat team commander,” said Burton.

Integration at the Fore

In addition to improving the readiness of the 20th CBRNE Command, Burton said the exercise validated the operational effectiveness of integrating CBRN and EOD forces into all-hazards formations. “Integrating these forces, under a unifying, technically competent headquarters at the appropriate echelon, immediately improves our capabilities,” said Burton. Burton said he was proud of what the 20th CBRNE Command had accomplished over the past year, including the successful culmination of Atropian Phoenix. “Atropian Phoenix was a huge undertaking, which has been in the works for the past year, from concept to execution,” said Burton. “A lot of hard work and a lot of powerful teaming efforts went into making this first of its kind training event possible.” Burton summed up the preparedness and purpose of the 20th: “We are moving out smartly, and across a very broad front to deliver a ready, reliable, and globally responsive CBRNE formation that is capable of leading and executing CBRNE related operations, anytime, anywhere.”

This article originally appeared in the Fall 2014 of CST & CBRNE Source Book.