Security Information To The Tactical Edge 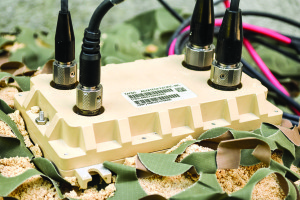 A&M: Why is CDS needed on today’s battlefield?

Mr. Cannon: In today’s increasingly connected battle space, instant information sharing is a necessity. For such systems, a cross domain solution (CDS) is a key enabling technology. A CDS allows selective, assured communication between networks of different levels of security by controlling the data flowing between the two networks. A high quality CDS does this by content aware inspection of the data, passing the data items unchanged, sanitizing individual items, or blocking the data flow entirely, according to a pre-specified security policy rule set.

As mobile devices become an essential part of the warfighter’s kit, the need for network connectivity extends down to the individual soldier. At the tactical edge, a CDS must not only protect sensitive systems from cyber threats, but it must also protect itself from compromise in the event that it falls into adversary hands.

A&M: If not currently fielded, is there testing and/or contract bidding expected?

Mr. Cannon: Advatech Pacific’s Tactical Cross Domain Solution (TACDS™) is currently in the process of being fielded by the Canadian Department of National Defense (DND) on several of their tactical ground and air vehicles. It is also being fielded on a UAV platform. TACDS™ has been selected for use on several U.S. DoD programs of record including ground combat vehicles, ISR sensor systems, and rotary wing aircraft.

The unit has been tested to MIL-STD 810G, 461F, 1275D, and 704E for ground and air vehicle environments. It has also been successfully evaluated at several of the U.S. Army’s Network Integration Evaluation (NIE12.2 and 13.1), Joint Users Interoperability Communications Exercise (JUICE-2013, 2014, 2015, and 2016) and Command, Control, Communication, Joint Users Interoperability Communications Exercise (C4ISR) exercises as well as a Canadian DND demonstration for the Tactical Armored Patrol Vehicle (TAPV).