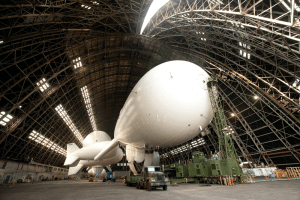 Matthew McNiel, Vice President of TCOM, a leading manufacturer of persistent surveillance technology, discusses the use of aerostats as a means of protecting national security interests at home and abroad.

Aerostat systems provide an affordable blend of the persistent presence delivered by ground-based sensors and the wide area coverage attainable from airborne assets. Aerostat systems can be optimized to comprehensive surveillance at a remarkably low cost. They carry the most modern sensors available with high throughput data links allowing for real-time observation and evaluation, providing a bridge between the lower cost, short-range platforms and higher cost, long-range systems.

Specifically, when compared to ground-based applications such as towers, Tactical Aerostats provide a much greater field of regard by flying hundreds to thousands of feet higher while maintaining persistent coverage for up to 14 days and requiring a low initial cost, a minimal footprint and only a handful of personnel to operate. This combination of range, precision and affordability has proven invaluable to the numerous Forward Operating Bases employed by U.S. Forces abroad.

When contrasted with airborne assets such as long endurance UAV’s, a single Strategic Aerostat can provide a persistent on-station time that would require four UAVs. The significantly lower cost achieved is why we like to say TCOM makes persistent surveillance affordable. For decades, Strategic Aerostats have surveilled the U.S. southern border in support of anti-narco trafficking and illegal immigration, virtually eliminating small plane flights in the Southwest and fundamentally effecting “go-fast” boats in the Caribbean.

As expected, and similarly to many surveillance technologies, the use of aerostats has significantly increased since 9/11 both domestically and abroad. TCOM-provided systems have supported the United States and foreign governments with complete persistent surveillance capabilities.

The aerostat has proven to be invaluable when facing an asymmetric threat. In Operation Enduring Freedom and Operation Iraqi Freedom, full motion video coupled with 1,000 to 3,000 of altitude allowed friendly forces to track and identify opponents placing improved explosive devices and guide weapon systems such as attack helicopters to eliminate the threats at their source.

With the development of , Aerostat-based sensors provide the lookdown angle necessary to see cruise missiles, yet keep the cost to fractions of that required to keep other Airborne Early Warning (AEW ) assets on station. This is evident with the current deployment of the Joint Land Attack Cruise Missile Defense Elevated Netted Sensor System (JLENS) supporting the Washington Military Region from Aberdeen Proving Grounds.

Currently, TCOM supplies aerostats as part of the Tethered Aerostat Radar System (TARS) Network deployed along the U.S.-Mexico border. These systems are optimized to monitor illegal activity along the border, specifically in hard-to-reach areas where drug trafficking and illegal border crossings have historically been a problem. Also, TCOM’s smaller tactical aerostats are augmenting the TARS program in areas with highly active ground traffic concerns. The smaller systems are also ideal for use in event security applications, such as the Super Bowl, World Cup or Olympics. They not only provide actionable surveillance data, but they also improve communication and collaborative ability for security personnel.

Aerostats by nature are best-suited semi-permanent locations, which require advanced warning or wide area surveillance such as forward operating bases, maritime approaches, and international borders. In these circumstances, they provide a highly beneficial, dual function. Due to the very prominent visual aspect of the airborne platform, any increase in effectiveness of supported troops is very quickly applied to the aerostats and behaviors modify significantly when in flight.

In the case of land applications, U.S. forces at Forward Operating Bases were often assaulted by lone insurgents remotely and improved explosive devices placed just outside normal observation areas. Invariably, the deployment of aerostats to the FOB’s saw an immediate increase in allied counter strikes. Within a short amount of time, local leadership would find enemy operations had relocated entirely or were curtailed exclusively to times when the aerostat was not flying.

The maritime domain, while also benefitting from increased effectiveness of friendly forces and the deterrent effect, has another interesting aspect. Aerostats have proven highly effective at monitoring migrant vessels and providing cues to rescue operations when necessary.

Low flying aircraft provide a challenge to traditional air defense systems as they can often use terrain to mask from ground-based surveillance, while airborne assets carry significant operational costs and typically advanced planning. The unique capability of aerostat borne sensors to look down (and thereby eliminate terrain masking) and stay on-station affordably has proven critical as evidenced by the longevity of the Department of Homeland Security’s Tethered Aerostat Radar System (TARS) program.

Internationally, we are expanding into markets with the technologies recently developed domestically to expand usage globally and allow incremental technical advances at no cost to the US Government.

Additionally, TCOM continues to develop innovations that enhance aerostat-system performance, durability, and overall effectiveness. Our Center of Excellence in Elizabeth City, NC promotes innovation in the Lighter-than-Air industry, serving as the central hub of activity to reduce risk and cost to new customers by integrating new and advanced sensors under internal research and development projects and shared costs with sensor manufacturers across the globe.

From airborne early warning on the US southern border and multiple countries in the Middle East to situational awareness for forward operating bases in various combat zones, the capability and value of tethered aerostats are well established. The continued value for cost is unmatched in decades of development.