Rewiring the Path from Discovery to Capability 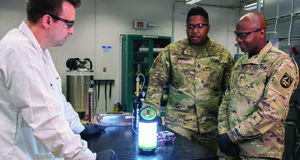 Scientific discovery often begins with curiosity. As curiosity gives way to understanding and insight, the question shifts to how one might beneficially exploit these new and potentially game-changing discoveries. Preparing the Army to win in Multi-Domain Operations, or MDO, demands an ability to rapidly identify, prioritize and resource the “right” science and technology, or S&T for the warfighter. This is no easy task given the ever-accelerating global emergence of new research and S&T advances. The Army Futures Command (AFC) identifies which new scientific discoveries could enable a competitive advantage for future warfighters. As such, AFC serves as a “catalyst” that drives discovery across the Army Modernization Enterprise (AME). Discovery alone, however, is not sufficient. Delivery of new capabilities that fully exploit the potential of new scientific discoveries is equally important.

The AME consists of a rich pool of expertise and capability from universities, industries of varying size and scope, other Army and government agencies, and public and private organizations. How does the Army best tap into the AME’s innovation ecosystem and inspire new concepts and capability development? The answer is early teaming and a much sharper focus on Army modernization priorities. This includes clearly defining and analyzing the Army problem with the same rigor used in developing potential solutions and capabilities. Established less than two years ago, the AFC’s key tenet – unity of effort- is already evident in its ability to focus diverse AME teams on prioritized Army needs and gaps.

Organizations within AFC are creating new and earlier opportunities to rapidly transform discoveries into competitive advantages for the warfighter. This includes interactive innovation workshops and a collaborative Army-wide effort to fundamentally rewire and synchronize the linkage of new discoveries and technological advances with concepts and requirements.

In November 2019, the U.S. Army Combat Capabilities Development Command’s Soldier Center (CCDC SC) designed an interactive event that united many elements of the AME. This included members from the CCDC Army Research Laboratory (CCDC ARL), the 75th Innovation Command, the Asymmetric Warfare Group, and universities, industry and other public/private organizations. The University of Massachusetts at Lowell hosted the event at its Innovation Hub, located in the historic textile mill area of Lowell, MA. Although the event was focused on wearable sensor technologies for the future warfighter, its underlying approach is pioneering and broadly applicable. The event deliberately engaged participants from the AME to discuss both the warfighter problem space as well as potential solutions. Too often, the focus of such ideation workshops is on the latter. Experienced Soldiers provided the event participants with first-hand accounts of actual challenges and opportunities in using new technologies and capabilities in unique operating environments (figure 1).

The wearable sensors event exhibited three key elements that are essential to achieving AFC’s “unity of effort” to deliver the right solutions at the right time to the warfighter. As illustrated in figure 2, these elements include early and diverse teaming on both the problem and the solution space; the use of notional Minimum Viable Products, or MVPs, to get immediate and experienced feedback from the warfighter community; and defining an initial target of opportunity where discoveries and technologies could have an immediate and significant impact (e.g., a subterranean operating environment).

“We shaped this event around the tenets of AFC’s five lines of effort (discovery, delivery, people, engagement and momentum)” said Mr. Douglas Tamilio, Director of CCDC Soldier Center. “The event, which was held at a facility that was designed to inspire innovation, focused on platoon organic wearable sensors in an MDO 2028 operational environment. Representatives from across the AME (DoD, industry and academia) convened to look past the horizon and generate concepts that are relevant to achieving overmatch in an MDO operational environment. In partnership with some of the National Manufacturing Initiatives, the Advanced Functional Fibers of America (AFFOA), and NextFLEX, we are in the process of resourcing and transforming these ideas into prototypes for Soldier feedback. Additionally, we are in the planning stages for similar events in calendar year 2020.”

Finite resources and a nearly endless array of emerging technologies to choose from emphasize why AFC is embracing “best of breed” approaches to identify, prioritize and deliver decisive combat power and capability. Innovation events that unite members of the AME and the warfighter community are an essential first step. Fundamentally rewiring the means by which promising technologies and concepts from these events are transformed into validated requirements and capabilities is equally important.

From Discovery to Required Capability

A new warfighter capability is not based purely on a new technological advance; rather, a new capability relies on a well-developed concept and a holistic balance of tactics, techniques and procedures that fully exploit advances made possible from new technologies. More generally this is known as Doctrine, Organization, Training, Materiel, Leadership and Education, Personnel, Facilities and Policy, or “DOTMLPF-P” capability. Synchronizing the interaction of concepts, requirements, and emerging S&T is paramount to delivering complete and competitive solutions to the warfighter.

As depicted in figure 3, the Army has two primary communities of experts with a shared mission to architect the Army’s future: operational experts in the Army concepts and requirements community who identify required capabilities to overcome a projected adversary and technical experts in the Army S&T community who execute use-inspired research to provide disruptive warfighter capabilities. Historically, these experts were housed in two different 4-star commands. A core design in AFC’s organizational structure was to fundamentally unite this expertise, creating the Futures and Concepts Center with operational expertise and the CCDC with technical expertise.

In March 2019, Task Force Ignite (TFI) was formed to instantiate processes, events and outcomes to realize this AFC vision. Ignite has iterated on the design of science-concept collaboration workshops to formalize new partnering opportunities between the Futures and Concepts Center (FCC) and CCDC. The workshops structure early and interactive discussions to integrate the operational expertise of FCC concept writers with the scientific expertise of CCDC researchers. These workshops collaboratively identify capabilities for the deep future that integrate capability needs with the art of the possible based in scientific discoveries and art of the probable based in technological advancements.

“Discovering, developing, and fielding future Army capabilities requires the concepts and S&T communities to be in total sync,” said Maj. Gen. John George, CCDC commanding general, “and that has been reinforced since I transitioned from my role at FCC to leading the team at CCDC.”

The “Celtic Knot” in figure 3 highlights the new holistic, analytically-driven framework that creates interactions among each element to ensure that concepts shape and refine use-inspired research, and executing S&T programs ground and devise new required capabilities in the concepts.

A recent TFI collaboration workshop supported the ongoing revision of the U.S. Army Functional Concept for Movement and Maneuver to integrate fully with Multi Domain Operations, or MDO. For the first time, a functional concept S&T appendix is being co-authored by technical and operational experts sitting in the same room debating the best path for the Army’s future force. The collaboration workshops produce co-authored text for the S&T appendix of the concept. The appendix now clearly codifies how executing research in CCDC will overcome technical challenges that prevent realization of the required capabilities. This integration of science and concept is a critical need to accelerate the delivery of innovative capability to the warfighter.

In addition to the science-concept collaboration workshops, TFI has designed FCC-CCDC events that enable data-driven decisions about the future fight. Specifically, Ignite collaboratively expanded the future study program in FCC to develop a concept of operations for scientific research earlier in maturity (Technology Readiness Level (TRL) <6). The most recent focused excursion concept of operations examined deep reinforcement learning, a subset of artificial intelligence, with the potential to enable mission command and facilitate MDO. Attendees decomposed operational implementations discovered during wargaming, analyzed capability enablers, revectored scientific hypotheses and defined key attributes and metrics that can be used in future experimentation to quantify the operational advantage of hypothesized scientific outcomes. These analytics provide a means for experimentation in the FCC future study program to estimate hypothesized operational effects of new capability ideas early in the maturation cycle, providing a means to refine and redirect the science execution to ensure maximum advantage for the warfighter.

Maj. Gen. George emphasized that “CCDC scientists and engineers provide invaluable technical expertise to FCC, ensuring our future warfighting concepts and requirements are informed by not only realistic assessments of our adversaries’ capabilities, but also scientifically-based projections of technological advancements in 2035 and beyond. Task Force Ignite is a critical step toward establishing even stronger working relationships between FCC and CCDC.”

MVP Disruption of Mobility and Comms

The path from discovery to delivery of a new capability is not always obvious, nor is it necessarily linear –- especially for disruptive technological advances. The TFI and MVP frameworks are attractive because they create a very early and iterative methodology for connecting new discoveries to required capabilities. Figure 4 is an actual work-in-progress exemplar of AFC embracing the MVP framework. CCDC ARL discovered and developed a new aluminum alloy that can rapidly and safely generate hydrogen when it reacts with water. The MVP approach made it possible to demonstrate the discovery in a context that would be relevant and intuitive to a Soldier — the ability to use the hydrogen-generating alloy to generate electricity to power a lantern for subterranean illumination.

Early exposure of warfighters and other key Army decision-makers and stakeholders to a new MVP can initiate the validation and maturation of promising new S&T discoveries and accelerate the Army’s ability to develop “complete” warfighter solutions. The MVP cycle also allows identification of new and disruptive potential uses for the nanogalvanic alloy. For example, after experimenting with the MVP, the Soldiers in Figure 4 suggested the technology could extend the operational life of both vital communication devices and UAVs.

In addition, an MVP can leverage critical expertise from across the AME. For example, through CCDC ARL’s Open Campus initiative, the ARL South Regional Site made it possible to access unique “systems” level expertise from the University of Texas at Austin’s Center for Electromechanics, or CEM. The center is conducting foundational research on the purity of hydrogen generated from CCDC ARL’s nanogalvanic aluminum process to deliver it to a wider array of Army-relevant applications.

“Since we stood up AFC, fresh diverse relationships are stimulating new ways of thinking about important problems and opportunities,” said Dr. Patrick J. Baker, Director of CCDC ARL. “This is bringing changes to how we operationalize science to get timely useful solutions to our Soldiers.”

Collectively, the efforts across AFC – to include the use of MVPs, a collaborative approach to early synchronizing of concepts, requirements, and S&T, and new workshops to directly connect warfighters to emerging sources of innovation from the AME gives AFC new tools to win in MDO and beyond.

AFC from its inception has been committed to strategically driving and empowering the AME to produce the right capabilities at the right time for the future warfighter. As noted by AFC command leadership, “winning matters…but winning together matters more.” This emphasis on collaboration is evident in AFC’s CCDC ARL, CCDC Soldier Center, and the Futures and Concepts Center efforts to develop entirely new and earlier linkages between the Army S&T community and the concepts and requirements community. The use of MVPs and the ability to synchronize S&T advances with required capabilities accelerates the transformation of new discoveries into competitive advantages for our warfighters.

“Ultimately, everything AFC does must be focused on the end user, our Soldiers,” said Gen. John M. Murray, Commanding General of Army Futures Command. “From the very beginning we’ve been working with ASA(ALT), the other commands and the entire Army Modernization Enterprise to ensure our top priorities are customer centered results, delivered at an accelerated pace. We’re doing this with Soldier touchpoints, advanced manufacturing and continuous feedback to make sure our entire team delivers what our Soldiers need to win wars.”