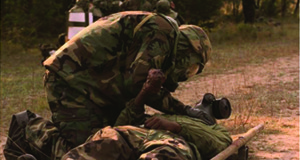 The possibility of a large-scale combat operations of a peer or near-peer adversary prompted a need to revise radiation event response training at the U.S. federal national security level. As such, changes were incorporated including high-fidelity modeling in a Table Top Exercise (TTX) and implementing a modular curriculum to help prepare Civil Support Teams such as the Guam National Guard 94th Weapons of Mass Destruction-Civil Support Team (WMD-CST) for any catastrophic nuclear disaster.

The MEIR course, formerly known as the Medical Effects of Nuclear Weapons (MENW), was developed first in 1976 by AFRRI Nuclear Science Department. The MENW course, initially a 7 to 14 hour block of lectures geared towards first-year medical students at the Uniformed Services University of the Health Sciences (USUHS), military cadets at the U.S. Army Military Academy at West Point, and nuclear medicine residents at the Walter Reed National Military Medical Center (NMMC), Bethesda, MD. The objective was to disseminate information resulting from AFRRI research, treatment of casualties of ionizing radiation exposure, or consequences of nuclear weapons. In 1995, the course expanded from a 14-hour block to a 1-week course given biannually at AFRRI by twenty-five speakers as well as to include non-battlefield nuclear incidents. Later, AFRRI condensed the MEIR course from one-week to a three-day course held throughout the year at various major U.S. military bases around the world.

Generally, the MEIR course conducted in three days, composed of lectures delivered uniformly by AFRRI’s staff to a diverse group of health care professionals. However, to account for the differences in students’ educational level, we modified the course from a traditional approach to a modular structure. The modular concept allows flexibility to tailor the lectures to the target audience, thereby minimizing cognitive overload.
Currently, we had three specific MEIR sections (See Figure 1) labeled First Responders, Operational, and Radiation Subject Matter Expert (RAD-SME) within our modular structure reduced to a two-day training. The first section was the First Responders geared towards teaching military and civilian medical professionals who are first at the scene of any disaster, examples are combat medics, corpsman, air force technicians, and paramedics. This section mainly taught to the 94th WMD-CST. The second section is Operational-focused on educating medical professionals involved in emergency medical planning, and coordination of logistics as well as emergency medicine nurses and physicians. Other participants such as, Guam Environmental Protection Agency, Emergency Department from the Guam Memorial Hospital, Guam local Fire Fighters, Guam Department of Agriculture enforcement section, and a representative from the Emergency Management Flight from Andersen Air Force Base (AFB) lectured in the Operational part. The third section is the RAD-SME, with examples such as, health physicists, radiologists, and occupational health physicians. There were a small number of RAD-SMEs; therefore, we combined the Operational and RAD-SME sections in the MEIR course hosted by 94th WMD-CST.

The U.S. Defense Threat Reduction Agency-Chemical Biological Radiological Nuclear and Explosive (DTRA-CBRNE) Preparedness and Response Division organized and planned the scenario-based TTX augmented to the MEIR course. The scenario-based TTX held for a day and a half after completing the educational portion detailed above. All the participants joined one group where they answered thought-provoking questions (see Figure 2) describing their response actions to a tactical nuclear detonation on a military facility. At the end of the TTX, we conducted an After Action Report (AAR) discussion documented by DTRA for distribution. The scenario-based TTX provided the National Guard’s 94th CST with DoD mandated real-world training so they could remain vigilant and ready for any cataclysmic nuclear event.

The scenario-based TTX consisted of high-fidelity modeling information provided by the DTRA-Applied Research Associates. The high-fidelity modeling is distinct from typical on the fly calculations because it is more accurate due to the higher resolution. In standard calculations, the fatalities and casualties of a tactical nuclear detonation depicted as percent probabilities (See Figure 3).

Therefore, there is limited or no data on the specific type of injuries, the geolocation or severity of the injured, the medical resources needed, the impact of the medical treatment on the casualty, and, most importantly, the time-phased modeling of the wounded. The advanced computer simulations offered a way to identify the injury patterns, the initial survivability based on real-world limitations, and the medical logistics challenges particularly in a prolonged field care.
In the scenario-based TTX, the modeling served as a guiding tool for the participants in helping them answered the questions. They were more informed on where they should allocate their resources for optimal survivability of the wounded. They understand better how to operate in radiologically contaminated environment without risking the safety of the medical professionals. In addition, they were able to identify the gaps and recommend solutions in their command and communications (C2) structure and plan.

The 94th WMD-CST and the other participants completed a pre- and post-survey of the revised Guam MEIR/TTX. We evaluated the pre and post surveys (See Figure 4), and the majority agreed that the content of the course has made them more prepared to respond for a nuclear attack. Before the course, a significant part of the student body felt unprepared for a nuclear attack. Also, we received additional comments on improving the MEIR course. One of the comments was to implement virtual reality/augmented reality to the class. We are presently working with DoD entities to help us merge virtual reality with the academic portion. Another suggestion was to add a field practical MEIR course, where we are collaborating with Defense Nuclear Weapon to establish this type of course. Furthermore, we will add a classified MEIR course tailor towards Commanders.

The modular structure of the MEIR course makes us aware of how adaptable the modular concept is to any future changes. Furthermore, it applies to a broad range of target audiences. The scenario-based TTX especially the advanced computer modeling gives insight on a real-world radiological/nuclear incident that is a low probability high consequence event. Therefore, integrating the modular curriculum with scenario-based TTX enhanced the readiness of the 94th WMD-CST to not only for a nuclear disaster but any catastrophic incident.