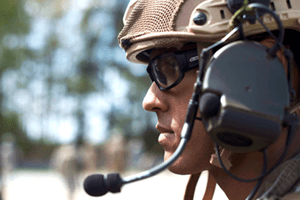 The role of scientific research in U.S. Army modernization is as important as the role of reconnaissance in combat operations.

Blind. The Commander who employs reconnaissance resources to attack targets or defend a position has left the unit blind. Blind to counterattack, blind to opportunities for a breakthrough, blind in every manner that matters for future operations. The same is true for scientific research resources. Scientific research is as different from technology development as is a zone reconnaissance from a movement to contact. And so, it is also true that the leader who employs scientific research assets for the development of near-term technologies is leaving the unit blind towards future opportunities and inviting technological surprise. Scientific research is akin to reconnaissance in that they are both planned activities conducted by highly skilled professionals who are focused on turning the unknown into the known. It is critical at this point in our history that not just our senior leaders, but all of the men and women who are the Army, understand what scientific research means for our future…lest we leave ourselves blind.

Army leaders at all levels consistently call for research resources to be applied to developing technologies because the consequences of those decisions are ill defined. The pressure to apply resources to make tools to perform tasks as opposed to search for new fundamental knowledge is not unique to the Army, rather it is as old as the Mechanical Age. When Galileo Galilei was paid by wealthy patrons to unlock the mysteries of the stars, his labor was of no use or harm to an agrarian society; the alternative was that he be one more hand in a field and so the public took no interest in the labor scientists. But when the power of the steam engine and the miracle of electricity yielded technologies that changed entire populations virtually overnight the public very much took an interest in the labor of scientists. The call was for resources to be diverted from the esoteric ‘search for knowledge’ to developing the technologies that would make a difference in the lives of the people now. So, when Army leaders ask why resources are spent on science for tomorrow instead of on developing technologies they can take to war today, they are asking the same valid question that has been asked the world over for a very long time. The answer to this question is that research is reconnaissance and without both we are blind.

The military history of battles whose outcomes depended upon investing combat resources in reconnaissance is well understood by historians and military leaders the world over. It is a rare National Training Center rotation where a leader does not relearn these lessons through defeat by the 11th Armored Calvary Regiment. Conversely, the military history of wars won or lost based on choices nations made between investing in scientific research for a possible future over technology development for a likely today is less well understood. The Germans discovered the science behind RADAR 1888 and in 1904 the German Navy was a presented a functioning system but they could not see the potential and did not pursue it until well after World War I. Less than 30 years later RADAR would be the deciding factor in protecting England from German bombing raids and American microwave RADAR would free the Atlantic of the devastation wrought by German U-boats. Similarly, the Germans and Japanese had the same knowledge of the possibility of a nuclear chain reaction at the same time as did the United States. It was the decades of American investment in scientific knowledge/research capacity prior to WWII that led to the U.S. winning the race to the atomic bomb. The U.S. military was so effective at operationalizing scientific research discoveries that President Roosevelt asked for the process to be replicated for all civilian industries to better the lives of all Americans. In the years between now and then, that vision and leadership has been lost to the degree that military leaders now look at civilian industries for models of how to achieve a scientific breakthrough.
Scheduling A Breakthrough

It is no more possible to schedule a scientific breakthrough than it is to schedule when reconnaissance assets will discover the opposing force. An operational plan that will only prevail if the enemy is ‘discovered’ at a pre-defined time, date and location is a bad plan; no Commander would accept it. Yet our Army all too often insists that scientists justify just this sort of folly when we put deliveries of technologies from scientific research on product development roadmaps. This disconnect is a function of using the wrong metric to measure the value of scientific research. Like reconnaissance, research produces the knowledge to inform decisions, not the desired outcomes of those decisions themselves. Imagine a Commander being asked to justify each reconnaissance target in terms of ‘Return on Investment’ (ROI). For that matter imagine having to justify the existence of a Scout Platoon itself based on its ROI; the notion is absurd. Reconnaissance assets are information gathering assets. Reconnaissance targets are established based on information requirements that are derived from the Commanders Critical Information Requirements (CCIR), i.e. the information the Commander needs to make decisions about how to achieve the mission. ACommander decides to assault an objective only after that Commander determines that there is enough information to begin the assault. The decision to begin developing a new technology is analogous to the decision to assault the objective; research provides the information for the former and reconnaissance the information for the latter. If we recognize that research is akin to reconnaissance in this way we will redirect our research assets away from technology development and back to the knowledge discovery activities we dominated during World War II.

Our Army is fortunate to have a leader of its newest four-star command who asks ‘ what could be ‘? Unfortunately, we have about 70 years of bad habits to overcome because we are trying to apply acquisition models from the 2nd Industrial revolution in a 4th Industrial revolution era. Old models of linear progressions along lines of Budget Activities (e.g. 6.1, 6.2, 6.3, etc…) and Technology Readiness Levels (TRLs) fail so consistently that we invented a myth called the ‘ Valley of Death ‘ to explain them away. A new, non-linear model of collaboration where the Army Concept Framework (ACF) inspires Army scientific research and known science is the basis for the ACF is rapidly taking hold. This paradigm shift can only flourish if, like reconnaissance assets, research resources are applied for their intended purpose of discovery instead of being diverted to technology development. Our Army has brilliant, award winning scientists spread across the formation. Our scientists created research programs which resulted in two dozen Nobel Prize winners. That cadre of brilliant scientists is still with us and still looking into the uncharted unknown and asking ‘what could be’. When discussing the future, General David Perkins was partly right when he describes the future as unknown and unknowable. The technologies of the future cannot be known with certainty, but what is certain is that those technologies will be based on the science of today. The science of today most certainly can be known…if we conduct the proper reconnaissance.

Bull Holland is a retired Army Officer with a PhD in Engineering Management from the Missouri University of Science and Technology.  He is a senior engineer at Bennett Aerospace supporting the Army Research Laboratory and an adjunct Associate Professor at North Carolina State University where he teaches Product Innovation and Hacking for Defense. tjhollan@ncsu.edu.