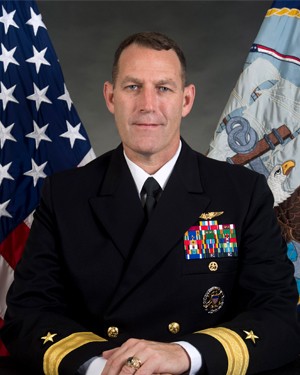 A native of Cross City, Florida, Wheeler graduated with a Bachelor of Science degree in Oceanography from the United States Naval Academy in 1988, and was awarded a Master’s Degree in National Security Strategy from the National War College in Washington D.C. during 2008. As a career Naval Flight Officer, Wheeler has served a tour with the War Eagles of Patrol Squadron (VP) 16, and as an instructor with the Pro’s Nest of VP-30. He served as the officer-in-charge of the Maritime Patrol and Reconnaissance Weapons Tactics Unit at the Pelicans of VP-45, and was the commanding officer of the Red Lancers of VP-10, and the commander of the Patrol and Reconnaissance Wing ELEVEN. While serving in the joint environment, Wheeler was the commander of the Provincial Reconstruction Team at the Forward Operating Base Sharana in Paktika Province in Afghanistan. Likewise, he served as the Deputy Brigade Commander for Interagency and Joint Operations at Task Force YUKON, 4th Brigade Combat Team (Airborne) with the 25th Infantry Division at Forward Operating Base Salerno in Afghanistan. Prior to reporting for his current assignment, Wheeler was the Deputy Commander at the Combined Joint Task Force – Horn of Africa in Djibouti, Africa.

“Today, we are seeing a renewed interest in airborne anti-submarine warfare and in the underwater domain,” says Rear Adm. William “Trey” Wheeler III, the U.S. Navy’s commander of Patrol and Reconnaissance Group and Patrol and Reconnaissance Group Pacific. “Imagine in the early 60’s, black and white television compared to what we have today, that’s the technology jump we’re seeing between the capabilities of the legacy P-3C Orion (P-3C) and its successor, the P-8A Poseidon (P-8A).“

Wheeler says it is technology, communication and teaming that makes this an exciting time for operators and stakeholders in the Maritime Patrol and Reconnaissance community. Today, the P-8A Poseidon brings speed to the fleet, the power of secure networks, and twice as much acoustic capability.

Rear Adm. Wheeler: The P-8A was designed and built to replace the P-3C Orion, which I believe has been in the fleet since 1962, and has been doing great work for us for a long time. The Navy really invested in the P-8A to do that traditional role of anti-submarine warfare. So, it’s built to accomplish that mission and it’s doing a tremendous job.

A&M: How is it different than the P-3? What new capabilities does it bring to the fight?
Rear Adm. Wheeler: Obviously, the most striking difference is its two engines, jet propulsion, as compared to the four-engine propeller-driven P-3 Orion. As I mentioned, the P-3 has been flying since the early 60’s. You can imagine the technology that has changed since then. Really, what the P-8 brings is that new technology. It takes an airframe that is very dependable in the Boeing 737 and combines it with some of the great sensors our industry partners have developed over the years combined with great computing power.

A&M: How is this helping the Navy in its modernization efforts, and meeting the operational goals of the Navy right now?

Rear Adm. Wheeler: What the P-8A really brings is that culmination of technology. If you imagine in the early 60’s black and white television compared to what we have today. Well, that’s the technology jump that we’re seeing, between a P-3C and a P-8A. The computing power alone, and being able to take all the information that’s available to that crew and bring it into one platform, process it and then have the ability to communicate that out to the warfare commanders, both on the carrier [carrier strike group], or at a fleet operations center or really just about anywhere around the world…where it’s needed…to get that information to the right decision makers. It’s a tremendous technology and a leap for the warfighter.

Rear Adm. Wheeler: They absolutely love the P-8A. For us old-timers, we grew up on that P-3, and it was a long mission, but it was a worthwhile mission. I think the difference today is that crew is still doing that long mission, but it’s a little smoother flying. They typically fly at a little higher altitude and, when they get back, they aren’t completely worn out. That level of improved comfort actually helps you on station when you are looking for a submarine. You stay fresh longer, and the technology on that plane fits what they grew up doing. They actually love it!

A&M: Can you explain how the P-8A operates in the Family of Systems?

Rear Adm. Wheeler: The Family of Systems really refers to the Maritime Patrol Reconnaissance Force that we are looking to build. It takes the P-8A Poseidon, couples it with the MQ-4C Triton, and then we have a ground node, if you will, in our Tactical Mobile.

What we are able to do is to look at the complementary missions that these two airframes bring and then merge the information from them both and get it to the right folks to act on it. From a P-8A standpoint, it’s taking advantage of a manned platform, which can get to a location quickly, deliver weapons if needed, and return; couple that with a Triton, which is a high-level, persistent intelligence, surveillance, and reconnaissance type platform and you have an unbeatable team. We take advantage of the best of both and use that ground node to help translate that information and pass it around. It is a nice, strong family.

A&M: Where are we now as far as development and delivery?

Rear Adm. Wheeler: So, we started the transition around 2012. The first P-8A deployment was in December of 2013. Since then, we’ve been working from one squadron to another. We’re a little over halfway. For the east coast, those squadrons that reside in Jacksonville (Fla.), they are complete. They are P-8A pure. Whidbey Island has completed their second squadron transition, and they’re well on the way to their third. It’s been a great thing to watch both from a leadership perspective, and as an operator … looking at what the airplane brings; it has tremendous, tremendous capability.

A&M: What do you expect to see in the future?

Rear Adm. Wheeler: I think our imagination is our only limit on what these planes will be able to do. The P-8A itself, one of the advantages we have is simply capacity. There is room on the plane, in the internal infrastructure, for growth, which is how it was designed for future development. I think our anti-submarine warfare role, which is really the core of the maritime patrol and reconnaissance community is here to stay. We are the only community that does long-range Airborne ASW. That mission is here to stay and we look forward to flying the P-8A for a long time.

A&M: Why the interest from the international community?

Rear Adm. Wheeler: Our foreign military sales and cooperative partners, currently the UK and Norway, and partner Australia provide tremendous leverage for us as a collective. When the partners come in, not only do we get closer from a commonality standpoint, but it allows us to leverage each other’s buying capital. By leveraging our partners, we can buy, produce, and procure things quicker, maybe than we could by ourselves. It’s tremendous leverage for us all. And, it’s great to have great allies.

From a teaming standpoint, the maritime patrol and reconnaissance force has really enjoyed a great team from the folks here at Pax River, PMA 290, as well as our resource sponsors up at the Pentagon. It’s a great, great team, great communications, and again the industry partners involved in both the P-8A and MQ-4C have been crucial. There are absolutely no complaints from where I sit.

As for the P-8A, the computing power alone, being able to take all the information that’s available to that crew, bring it onto one platform, process it, then have the ability to communicate that out to the warfare commanders, both on the carrier strike group or at a fleet operations center, or really just about anywhere in the world that it’s needed to the right decision maker, tremendous technology, and again, a leap for the warfighter.