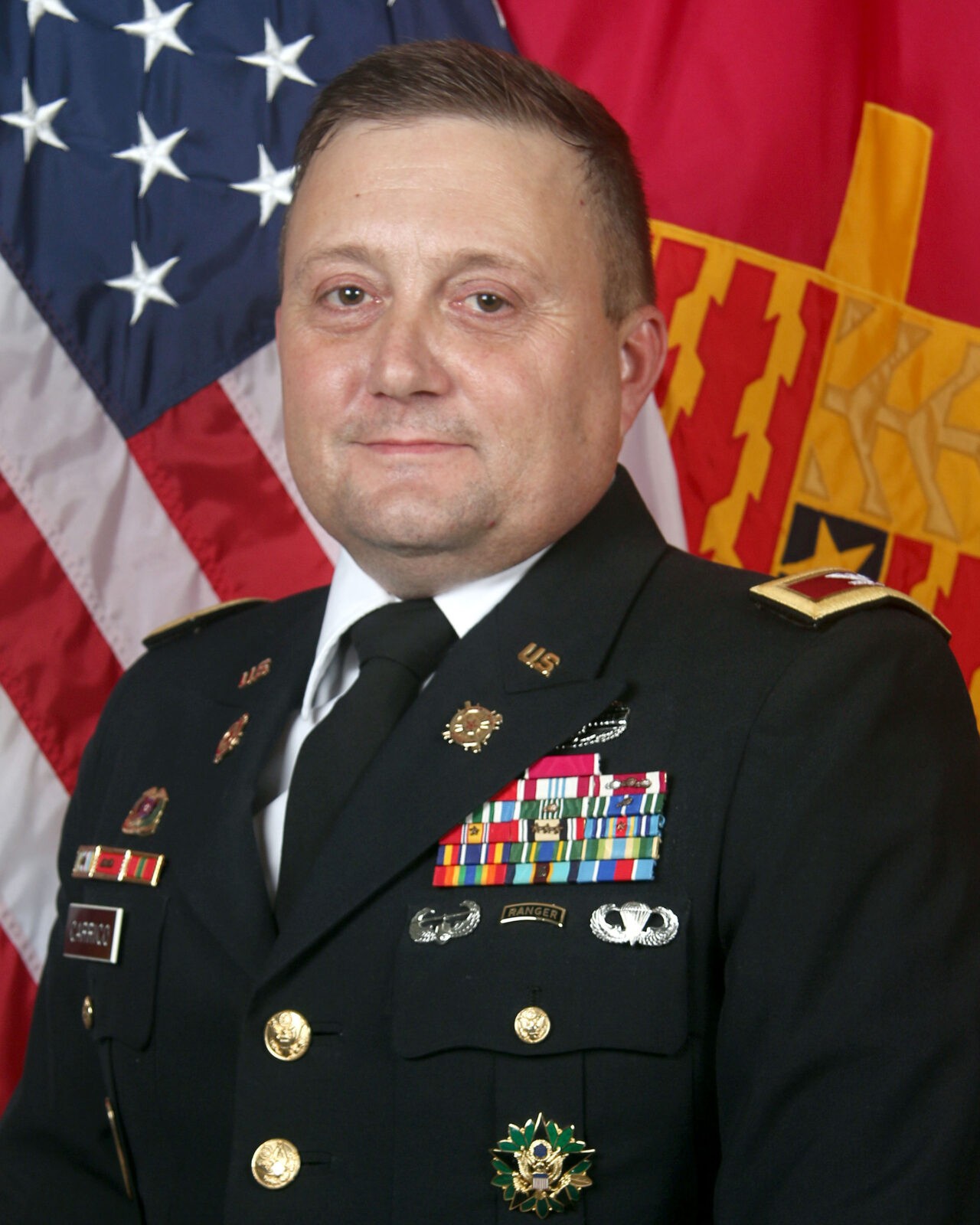 Colonel Jason A. Carrico is a native of West Plains, Missouri. He received his commission upon graduation from the Virginia Military Institute in 1992 with a degree in History and International Studies. COL Carrico’s military education includes the Command and General Staff College and the School of Advanced Military Studies at Fort Leavenworth, Kansas. He holds a Masters of Organizational Management from the University of Phoenix and a Masters of Military Arts and Science from the US Army Command and General Staff College. In addition, he has completed the Infantry Officer Basic Course, Light Infantry Leaders Course, Jungle Warfare School, Air Assault and Airborne school, Ranger School, Quartermaster Branch Qualification Course, Combined Arms and Services Staff School, Petroleum and Water Officer Course, Support Operations Course, and the Security Assistance Orientation Course. COL Carrico began his career as a Rifle Platoon Leader in 3-327 IN, 101st Airborne Division (Air Assault). While with the 101st he also served as an Anti-Armor Heavy Weapons Platoon Leader (TOW), Assistant Brigade S-4, Support Operations Movement Control Officer, and deployed with “Joint Task Force Bastogne” to Haiti as a J4 Supply Officer where he served as the officer in charge of the “Weapons Buy Back and Seizure Program” and served as a liaison officer to the Haitian National Prison and the police training program. In the Second Infantry Division, Republic of Korea, he served as the Division Repair Parts Officer and as Company Commander of A/702d Main Support Battalion. COL Carrico then served as a Regimental Operations Officer for the 3/290th Infantry Regiment in Oklahoma City and as a “Training with Industry” Logistics Intern with the Army Air Force Exchange Service in Dallas, Texas. Upon completion of the internship he served as the Assistant Executive Officer and as a Program Analyst for the Deputy Chief of Staff G-4 at the Pentagon, Washington D.C. COL Carrico then served as a III Corps Plans Officer at Fort Hood, Texas and deployed as a Multi-National Corps Iraq C-3 Plans Officer in Baghdad, Iraq.

COL Carrico: P3 programs are a vital part of Red River Army Depot and the Organic Industrial Base. They allow the depot and private industry to work together to support the Warfighter avoiding the pitfall of placing depots and private industry in direct competition. Currently, Red River has 23 on-going partnering agreements in place. Since 2008, the depot has entered into over 200 partnering agreements generating more than $412 million in revenue. The end result is a win-win for both partners and ultimately our nation’s Armed Forces.

A&M: How long have P3 programs been in existence at Red River?

COL Carrico: The depot’s first Public-Private Partnerships started in 2002. The longest running P3 at Red River is with BAE Systems, the Original Equipment Manufacturer (OEM) of the Bradley Fighting Vehicle, which began in 2004. It is our longest continuous partnership spanning thirteen years, and it has generated more than $600 million in revenue. We’ve also partnered with many other private companies including AM General, Navistar, Robbin Industries, LOC Performance, Caterpillar, Raytheon, Lockheed Martin and L3 Com. Our partnership programs have ventured outside of workload opportunities to include partnering with our local college and university: Texas A&M University at Texarkana and Texarkana College. Since 2011, the TC at TexAmericas Center has specialized in training our workforces in heavy equipment operations including training for Caterpillar engines, Allison transmissions and dynamometer testing. Courses are also available for mechanics, welding, CPR, first aid, hazardous waste operations and emergency response. Texas A&M University provides on-site courses for our depot employees in Leadership, Program Management and Logistics. Together, we are able to further the education of our current workforce as well as prepare people in our local communities desiring to work at our depot in the future. It is our desire to remain proactive in our training methods and continue to explore new opportunities in today’s technology-driven world.

A&M: How has Red River benefited from Public-Private Partnerships?

COL Carrico: Our partnerships are a tremendous benefit for the depot, private industry and the Army as a whole. We use our partnering relationships to share technology and look for potential improvements to our current processes. We are able to benchmark our operations at the depot and share “best practices” with our industry partners. The relationships we’ve established enable us to evaluate all of our production processes and benefit from the achievements of our partners in private industry. It also allows private industry to learn from our skilled artisans. The talented men and women of Red River Army Depot maintain an amazing safety record with a lost time case rate of 0.45 and total case incident rate of 2.49 which are 85% and 62% below private industry rates respectively. Utilizing “best practices” paved the way for achieving another great milestone for the depot. In 2015, Red River was selected as an Occupational Safety and Health Administration Voluntary Protection Program Star Site. Red River was the first depot to achieve star site status within the Tank-automotive and Armaments Command. The Red River team is a winner of eight Shingo Medallions as well the Army Award for Maintenance Excellence and the prestigious Robert T. Mason award, which recognizes excellence in manufacturing. Together with our private industry partners, we can continue to provide the highest quality products available for our customers.

A&M: What does Red River look for in a Public-Private Partnership?

COL Carrico: A primary component of military strategy is technological superiority. With decreasing budgets, this is more challenging than ever. However, the use of Public-Private Partnerships is a way to maintain that superiority while optimizing the infrastructure and skillsets within the OIB. Appropriate partnering with private industry helps sustain core maintenance capabilities at the depots and arsenals; it should also sustain and improve technical expertise in the workforce. Additionally P3s can evolve to the point that they improve the financial viability of organic activities and eventually result in increased private sector investment in facilities and equipment.

A&M: Can you share some of the positive outcomes and accomplishments through your P3 programs?

COL Carrico: One positive outcome of our P3 programs has been the continuous positive feedback we receive from our customers. We have found with many of our P3 programs, we’ve been able to exceed the customer’s requirements and quality standards. Partnerships allow the Army to leverage the skills and capacity of our industry partners while enhancing the production capability of the Organic Industrial Base.

One example of finding a solution for our customer resulted from our partnership with AM General, the OEM of the High Mobility Multipurpose Wheeled Vehicle (HMMWV). Through the partnership, our team was responsible for completing upgrades to the body of the M1151 converting it to the M1167 Tow Missile Carrier configuration. The HMMWV bodies were then sent to AM General’s facility in Mishawaka, IN, where each was joined to a new chassis. Our team was able to design and fabricate a cart enabling employees to easily move the bodies up and down the production line. Prior to the cart innovation by the Red River team, the process required a forklift, an overhead crane, a large jack stand and three mechanics to perform the task in a dedicated workstation. Collectively the team worked to design the carts which not only allowed the production line to be more efficient, but, more importantly, to be safer for our team members.

Beyond the obvious workload advantages to partnerships, you cannot overlook the tremendous technical and production process advantages that both the depot and private industry gain through partnerships. Another part of the partnership effort is the sharing of expertise, LEAN manufacturing processes and techniques. In the end, both entities gain knowledge from sharing best practices, not to mention a better trained, more capable workforce. Good partnerships pave the way for other opportunities to work with industry. Partnering also provides a built-in surge capability for the OIB that allows us to more effectively support the soldier in the field.