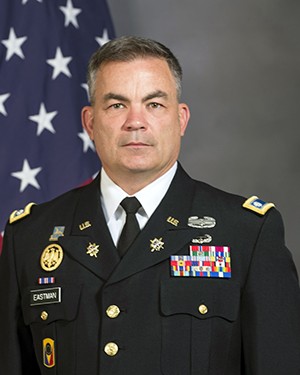 CST & CBRNE: What are some defining mission sets in the evolution of the 44th WMD-CST?

LTC Eastman: The 44th WMD-CST is one of two teams in the Florida National Guard that are on hand for response to emergencies, natural disasters or potential terrorist activities that may involve weapons of mass destruction or toxic industrial chemicals. The 44th CST is comprised of a combination of 22 full-time guardsmen from both the Florida Air National Guard (FLANG) and the Florida Army National Guard (FLARNG). Their mission as hazardous materials (HAZMAT) technicians is to assist civil agencies during suspected CBRN incidents by providing specialized equipment to help identify unknown substances, facilitate the hazard assessment process, and advise on the course of action for the incident.

Florida spans nearly 800 miles from Pensacola to Key West. With the 44th CST stationed just outside of Jacksonville, we are centrally located and prepared to respond anywhere in the state, at any given point in time. Along with providing standby support since being certified in 2002, we are often sought out for our HAZMAT expertise. We have the added benefit of frequent training events with our first responder community. In addition to responding to an event after it has occurred, the 44th CST will pre-deploy, upon request, to a location in support of high-profile or high-attendance events. The 44th CST has pre-deployed to a myriad of events throughout the state.

CST & CBRNE: With recent challenges presented by Hurricane Irma relief efforts, can you speak to some incidents that the 44th was involved with in terms of humanitarian and CBRN or other attack scenario preparedness?

LTC Eastman: The 44th has evolved through the years from conducting exercises with individual first response agencies and providing standby mission support for select venues, to conducting large-scale multi-agency exercises and providing numerous venues with standby mission support. As the team has matured through the years and solidified our relationships with our fellow first-response partners, and the potential threat has increased, the team’s standby mission support has increased significantly. Moreover, the addition of the 48th CST in 2011 has enabled the CSTs to better cover the whole state, which has further enhanced both teams’ relationships with our first response partners.

During the response to Hurricane Irma’s devastation this past September, the 44th CST was able to deploy a Survey Team as a communications asset assisting other FLNG units. “The 44th CST deployed one Survey Team member with our Dismounted Strike Kit to provide communications for the Florida CBRN Enhanced Force Response Package (CERFP) while they were conducting their search and rescue mission in the Florida Keys. The Team deployed the Dismounted Strike Kit, a satellite communication device that provides internet, phone and Wi-Fi capability. This allowed the personnel responding to areas where these services had been disabled to provide status reports and the progress of search and rescue operations to higher headquarters. In addition, this allowed the communications non-commissioned officer (NCO) to remain with the unit’s Unified Command Suite (UCS), therefore enhancing the capabilities of the unit.

The 44th also reached out to the county emergency managers in the most affected areas and offered to support them in identifying any displaced and/or unmarked HAZMAT that may have resulted from Hurricane Irma. Fortunately, for the environment and residents, no significant HAZMAT was displaced and so our assistance was not required in this area. The 44th also provided liaison officer support to the FLNG Joint Operations Center and to forward deployed units supporting the hardest hit areas.

CST & CBRNE: As the complexities of implementing standards for next-generation communications networking in coordination with other civil and DoD entities whether exercise or real-world, can you talk about ways the 44th is setting an example in terms of personnel readiness and Joint operability?

LTC Eastman: The CST program as a whole (nationwide) has always been at the forefront for CBRN detection and identification. We regularly field new and cutting-edge equipment to ensure the CSTs remain the premier CBRN capability within the nation. In addition, we train with this equipment continuously. It is the training, as much as the equipment, which ensures the teams stay highly proficient in their ability to better identify potential threats. We also help our first responder partners conduct their CBRN training. We continuously work to maintain and enhance our relationships with our partner agencies, which has enabled us to become more engaged in the overall process of synchronizing all relevant agencies toward the goal of protecting Florida’s citizens and visitors.

CST & CBRNE: With the need for counter-terror preparedness at home, speak to some efforts the 44th has and is engaging to better target potential threats with newer methods and capabilities.

LTC Eastman: The goal, as always, is to stay engaged with the 44th’s civilian first responder partners. They are our ‘customer’, and as such, we need to provide them value added support that will enhance and fill gaps within their capabilities. If the CSTs do not continuously innovate and evolve our capabilities, and stay at the forefront of CBRN detection and response, then we will no longer provide that added value and will become less relevant. To that end, the 44th continues conducting exercises, both with individual agencies and large-scale joint ones, participating in the Regional Domestic Security Task Force meetings, along with other relevant local and regional meetings. We will provide CST capabilities briefings to county emergency management managers and the respective county agencies. Ultimately, our goal is to increase our standby missions at venues where we can effectively augment first responder capabilities.