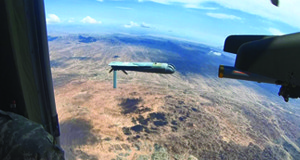 A&M had the chance to speak with the Future Vertical Lift Cross Functional Team (FVL CFT), U.S. Army Futures Command, regarding current and forward-looking goals and focus areas for the future of Army helicopter capability.

A&M: Provide brief backgrounder on Army requirements and current evolution on the first of five Capability Sets for FVL.

A&M: From a medium-size assault/utility perspective, how will FVL provide greater offensive and transport capabilities for rapid zone entry/exit?

FVL CFT: Future Long Range Assault Aircraft (FLRAA) is the next generation Lift, Assault, and medical evacuation (MEDEVAC) aircraft that integrates new technology, materials, and designs that increase speed, range and payload. The FLRAA (CS3) is intended to replace the UH-60. FLRAA will see increased speeds of more than twice the current fleet and endurance of up to three times the distances we’re capable of today. These increased capabilities will allow FVL to maintain vertical lift dominance over peer and near peer adversaries in all phases of Multi-Domain Operations (MDO) and for FLRAA specifically in the exploitation phase.

A&M: What are some current milestones (recently achieved/coming) for FVL going forward?

FLRAA Competitive Demonstration and Risk Reduction efforts for FY20 to reduce risk and inform the refinement of requirements and acquisition approach prior to the program of record scheduled to begin in FY22. The U.S. Army solicited for the Future Long Range Assault Aircraft (FLRAA) Competitive Demonstration and Risk Reduction (CD&RR) via the Aviation and Missile Technology Consortium (AMTC) Other Transaction Authority (OTA). The CD&RR phase one is for delivery of an initial conceptual design to include all substantiating technical documentation to support the design, requirements decompositions, trade studies, and requirements feasibility with contract award anticipated by April 2020.

FARA Competitive Prototype efforts are underway with five industry partners submitting engineering designs for the future scout helicopter again under an OTA that will see two selected to continue on and build prototypes beginning in FY20 with a fly-off scheduled for FY23. These prototypes will provide the Army with critical data to determine the requirements for FARA and deliver capabilities to soldiers sooner rather than later. As senior leaders have recently commented, we’re going to “fly it before we buy it.”