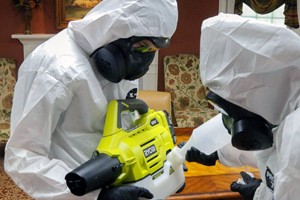 During the 2020 COVID-19 pandemic, Soldiers and Airmen of the Georgia National Guard were mobilized to State Active Duty and put to the test of Defense Support to Civilian Authorities (DSCA). The State of Georgia has over 600 Soldiers and Airmen involved with the National Guard Bureau’s (NGB) Chemical-Biological-Radiological-Nuclear (CBRN) Response Enterprise (CRE) program. These Guardsmen include those of the 4th Civil Support Team (CST), the State’s CBRNE Enhanced Response Force Packages (CERFP), and the Homeland Response Force (HRF). This group of Guardsmen are all part of the 201st Regional Support Group (RSG), which comprise the Federal Emergency Management Agency (FEMA) Region IV HRF. Georgia’s 48th Infantry Brigade Combat Team provided an additional 1200 Soldiers to the fight to support the humanitarian missions to alleviate suffering of the citizens of Georgia.

Responding to the Governor’s Call

Early on, as COVID-19 was spreading and there was limited experience or information about the virus, Georgia’s Leaders understood that flattening the curve of the virus spreading was a planning factor to keep the hospitals and medical community from becoming overwhelmed. The Governor’s Task Force on COVID19 determined Georgia had a limited number of Intensive Care Unit/Critical Care (ICU/CC) beds and a limited number of ventilators. The Governor’s Task Force also understood that when it comes to residents of a Long Term Care Facility (LTCF), or nursing home, there is a very high likelihood that they would need one of those CC beds and require a ventilator should they become infected. To maximize bed availability and keep those beds available for others that would need it, the Governor’s Task Force came up with a plan to keep one of our most vulnerable demographics out of the hospitals. This led to the creation of the Infection Control Team (ICT) concept.

Late in the afternoon of 31 March 2020, an LTCF in South Georgia called the Georgia Department of Public Health (DPH) and requested assistance for the more than two dozen cases of COVID-19 they were experiencing. The Soldiers from the State Safety office had the experience necessary. For two weeks they had been cleaning barracks on Dobbins Air Reserve Base and Clay National Guard Center that were used for approximately 200 quarantined U.S. citizens from a Pacific Ocean, South East Asia cruise liner. Earlier in the year, the Soldiers of the State Safety Office were tasked to clean barracks that had become overwhelmed with mold. The team determined that if they could fog and wipe down the barracks to kill the mold, they could do the same for the virus, which is much easier to kill than mold.

During the process of disinfecting the empty barracks space that was used to house the cruise ship guests, the call came to assist the South Georgia LTCF. Soldiers of the 201st RSG and the State Safety office quickly developed a protocol to fog and clean the facility to stop or slow the spread of the virus in the LTCF. The 201st RSG Soldiers drove five hours to the LTCF and began disinfecting the facility. They then focused on teaching the staff of the nursing home how to properly don, doff, dispose of their personal protective equipment (PPE), and maintain a “hot,” “warm,” and “cold” zone to limit the cross-contamination of the virus. The two-day process of cleaning and disinfecting the 100-bed plus facility was welcomed by the staff and management and seen as a success by the Georgia Guard leadership and the Governor’s office. The Governor and Adjutant General gave the order to ramp up the training of teams and get them to work across the state in other LTCFs. Training for Georgia Guardsman began in earnest to man a total of over 75, 14-person ICTs at the pinnacle.

Designating Standards for Disinfection and Protection

The Department of Public Health, in conjunction with the Governor’s Task Force on COVID-19, supplied the National Guard with the name and number of every LTCF in Georgia. Soldiers and Airmen went to work with military precision and quickly divided the state up into Areas of Operations (AO), giving specific units responsibility to contact, schedule, and clean the LTCFs in its AO. During the 31 days of April, more than 1000 Citizen Soldiers and Airmen of the Georgia National Guard disinfected and cleaned over 634 LTCFs to help protect the citizens of Georgia. The ICTs also cleaned several Sheriff’s Offices, City Halls, Police Departments, and Court Houses to ensure government services were not interrupted.
The protocol for disinfecting and cleaning included fogging, wiping down commonly touched surfaces, and teaching the staff how to properly wear, take off, and dispose of their PPE. The Teams would often leave additional PPE behind to ensure the staff had adequate protection while working. One disinfectant used was a variant of hypo-chlorous acid (HCl), and a second solution was a variant of hydrogen peroxide mixed with a surfactant. Both were initially designed to mitigate mold in living quarters, so it made sense that they were strong enough to kill the virus, yet mild enough to use in LTCFs. Per Center for Disease Control (CDC) guidance, any Environmental Protection Agency (EPA) N-listed disinfectant would be suitable for the job. The Guard chose those two solutions as they had experience using them in the past, and the Georgia Building Authority had already approved them for use in living quarters. A supply chain was quickly developed, and a logistics hub established by the 201st Regional Support Group (RSG) at Dobbins Air Reserve Base, just outside Atlanta, for getting the solutions and supplies to the ICT Soldiers throughout the state.

The logistics hub also provided the PPE the ICTs needed to protect themselves while disinfecting and cleaning the LTCFs. The PPE selected started with standard N95 masks, face shields, and medical splash protection coveralls. A decision was made to move away from the medical coveralls that the public was used to seeing and go to the HAZMAT Tyvek, Level B, splash protection overall, and military M50 mask variants. The decision to make that switch was predicated on the use rates of the medical coveralls and N95 masks. The paper-weight coveralls and N95 masks were suitable for only one use and could not be disinfected quickly. The military hazardous material (HAZMAT) Tyvek and N95 masks are products the Soldiers were already trained to use, easy to disinfect, and supplies medical aid workers needed were never depleted in the care of citizens. The National Guard Bureau CBRN Response Enterprise (NGB CRE) had thousands of the heavier Kappler Tyvek suits on hand to use in the event of a large scale CBRN event or attack. The decision was made to use the military suits, and NGB provided its guidance on reporting. The COVID-19 pandemic was indeed a large-scale biological event and warranted the use of equipment stockpiles.

One of the most significant risks the ICTs faced was becoming the vector of the virus by taking it from one LTCF to another while cleaning. Strict protocols were put in place to disinfect all the equipment and PPE on-site, in the parking lots of the LTCF, and then once more when they returned to their respective armories. The entire HAZMAT suit was dunked in a tank of disinfectant and then rinsed out and hang dried to be used the next day. The same procedure was followed when disinfecting the military masks. The N95 mask is called such because it can filter 95 percent of particles down to a .03-micron level. To compare, using a cloth covering or a surgical mask will only stop, not filter 40 percent of the same particles. The military mask will filter 99.5 percent of the particles down to .03-micron level. This practice ensured Guardsmen did not carry the virus to the next LTCF. There were initial concerns about the optics of uniformed Guardsmen going into the LTCF with their military masks and suits. However, once the nursing home staff and residents understood why they were there, they welcomed the Servicemembers with smiles.

Adjoining states and National Guard Bureau, in Washington, DC, quickly heard of this protocol the Georgia National Guard was using and requested training and guidance for their Guardsman. Through a written product and accompanying video, the Georgia National Guard gladly shared their knowledge and experience with all who asked.
As a result of the collective initiative of Georgia’s leadership and the creativity of its Guardsmen, the state rapidly “flattened the curve” and its healthcare resources stayed well below capacity. Over 31 days of disinfecting and training LTCFs ensured that Georgia never used more than 78 percent of their ICU/CC beds and even fewer ventilators. The Georgia Adjutant General (TAG), MG Thomas M. Carden, continually states, “The Georgia Guard will not be late to need and will alleviate suffering for the citizens of Georgia.” It is a testament to the foresight, resolve, and willingness to work in the service of others that the Georgia Guard’s men and women who made up the Infection Control Teams were so successful.