Powering the Marine, Enabling the Force 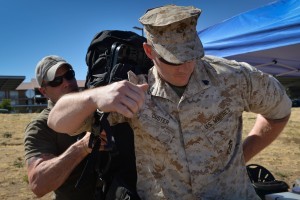 The overall mission of the Marine Corps Expeditionary Energy Office (E2O) is to “analyze, develop, and direct Marine Corps Energy Strategy in order to optimize expeditionary capabilities across all warfighting functions.” We lead the Marine Corps’ energy innovation in support of the warfighter, to increase the operational reach of the force and make Marines more effective on the battlefield.

As the Science and Technology (S&T) Lead for E2O, I assist the Director in that mission accomplishment, as well as drive the office toward meeting the Commandant’s 2025 goal of enabling Marine Expeditionary Forces to “maneuver from the sea and sustain its C4I [command, control, communications, computers, and intelligence] and life support systems in place” with zero non-mobility fuel.

My position as E2O S&T Lead is multi-faceted. One of my main responsibilities is identifying technology solutions to close the (52) materiel gaps delineated in the Expeditionary Energy Water and Waste Initial Capabilities Document (E2W2 ICD). Gaps are a lack in capabilities or technologies needed to enable the Marine Corps to meet the Commandant’s 2025 goal. Solutions to the material gaps will provide capabilities to extend the operational reach and self-sustainability of expeditionary forces.

Other responsibilities include interacting with industry to evaluate and analyze higher Commercial Off-The-Shelf (CoTS) Technology Readiness Level (TRL) technologies that have the potential to close gaps or provide disruptive capabilities. One example of our partnership with industry to find the best solutions to our tactical energy problems is the annual Expeditionary Energy Concepts (E2C) technology demonstration (formerly known as the Experimental Forward Operating Base or ExFOB). E2C is a process we use to identify, evaluate, and accelerate fielding of the best technologies industry has to offer and get those technologies into the hands of Marines.

When capabilities cannot be addressed with CoTS technologies and are very early TRL, we turn to the Office of Naval Research (ONR) to assist in technology development. I am also responsible for sitting on the ONR Future Naval Capability (FNC) Power and Energy (P&E) Pillar Working Group. The working group collaborates with many other organizations in order to develop Navy and Marine Corps P&E related gaps. Once the gaps are created, ONR program managers create programs that develop nascent technologies to address these gaps.

An example of a technology developed by ONR program managers is the kinetic energy harvesting backpack, the squad electric power network, and Individual Water Purifications System (IWPS) in the Joint Infantry Company Prototype (JIC-P). ONR originally provided the S&T funding to develop the systems that were later drawn into the JIC-P program. Once the technologies were sufficiently developed, the services provided funds to develop the technologies further and test them in an operational relevant environment.

The JIC-P is a 24-month joint effort between the Army and the Marine Corps, led by E2O, with the objective of lightening the load and reducing size, weight, and power requirements of dismounted systems. It will provide the Marine expeditionary rifle company with a unique, self-sustainable, capability set that enables dismounted multi-day operations in an austere environment while informing the Dismounted Forces Energy Requirements Integrated Product Team (DFER-IPT).

A side-by-side comparison of the Marine Corps VPM and the Army ISPDS will inform the joint community, play a crucial role in determining the future small unit power architecture for the Marine Corps, and inform the Army’s Milestone C decision for the Small Unit Power Program. The side-by-side comparison effort will be accomplished through collaborative partnership between the Naval Surface Warfare Center Dahlgren (NSWCD), Natick Soldier Research and Development Engineering Center (NSRDEC), the Army, and the Marine Corps. The next step is to start testing the JIC-P with Marine Corps Forces at the platoon level. 3rd Marines will be running the JIC-P technologies through their paces during the Rim of the Pacific Exercise (RIMPAC) 2016 in Hawaii.

The problem driving the technology development in the JIC-P is the unconstrained energy required on the battlefield. Marine infantry companies use more fuel than infantry battalions did 10 years ago.

Changes in the MAGTF include:

30% decrease in MPG across the tactical fleet

The concept of the JIC-P is a few years in the making. JIC-P technologies can find their roots at ONR. Each technology is the culmination of years of research and development. One of the products provided by ONR was the result of a FNC called the Squad Electric Power Network (SEPN); a power management system. The intent was to lighten the load of dismounted warfighters and address the burden of increasing power requirements of electronic devices on the battlefield.

The SEPN system was later incorporated into the Marine Austere Patrolling System (MAPS), which provided power management, production, and distribution, along with an individual water filtration capability; essentially providing power and water “on-the-move” for dismounted forces. Once the MAPS effort came to an end, E2O decided to incorporate kinetic energy harvesting into the system. The Director of E2O tasked me with executing a company-sized evaluation and exercise. However, E2O didn’t have the funding needed to execute the program.

Knowing that lightening the load of dismounted warfighters is a Department of Defense problem, not just one for the Marine Corps, I began gathering stakeholders from the Army and other efforts already ongoing and analyzing where the overlap existed and how each effort could leverage the results of the others. After gathering support for the idea, I presented the JIC-P program to the Office of the Assistant Secretary of Defense (OASD) Operational Energy Plans and Programs (OEPP). OASD agreed to fund the idea and the JIC-P program was launched.

Advantages of the JIC-P for the Marine Corps

As the JIC-P system develops, and the system of systems is integrated, it will be tested and evaluated. Quantitative data will be collected through data loggers on the equipment and Marines and soldiers will provide qualitative feedback on the system—informing the services of unit level energy production capabilities and energy consumption requirements. As this process unfolds, the utility of the system will become more apparent. In the meantime, we can only speculate at the advantages the system will provide.

A typical dismounted Marine carries up to 20 pounds of batteries in addition to his combat load and requires three gallons of water a day in an arid environment, equating to just over 75 pounds of water on a 72 hour mission. By networking end-user electronic devices to a central battery and providing the capability to replenish energy and water on the battlefield, the hypothesis is dismounted warfighters can carry much less weight in batteries and water, by tapping into available energy and water on the battlefield.

For example, if Marines are conducting a foot mobile patrol, they can harvest energy on-the-move with the backpack and the kinetic knee harvesters. If they are in a static location they can harvest solar energy during the day. If they come across crippled vehicles, they can scavenge energy from the vehicle battery. The JIC-P system provides multiple options for collecting energy and sustaining dismounted forces in an austere environment.

JIC-P and the Future Fighting Force

The JIC-P is the culmination of many years of effort and collaboration between multiple organizations. The JIC-P system of energy harvesting coupled with power management and central energy storage are the key to increased energy sustainment. The technologies comprised in the JIC-P will increase mission time and the energy sustainment of dismounted warfighters. User evaluations are being conducted in Fiscal Year (FY) 2016 and FY 2017 to quantify JIC-P system impact.

While the technologies in the JIC-P may not solve all the problems of dismounted warfighters in their current form, the JIC-P will provide information vital to the development of future technology solutions that will be smaller, lighter, and require less power—increasing the operational reach and self-sustainment of the warfighter in an austere environment.

As the future force continues to increase the utilization of power electronics technologies such as small quad copter unmanned aerial vehicles that can be used in an urban environment, the need for power on-the-move and energy scavenging and harvesting systems will increase as well. The JIC-P is a step in the direction for developing solutions to current and future needs.