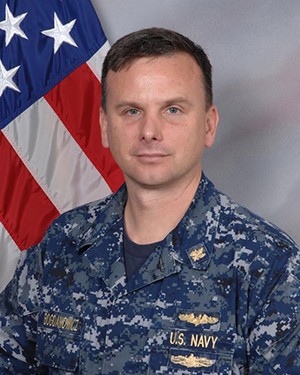 CAPT Edwin Bogdanowicz is currently serving as Director, NAVSUP Energy Office at Fort Belvoir, VA.
He leads a team of engineers, logistics specialists, chemists and experts in petroleum operations in developing requirements, supply chain policies and procedures to support the global Navy and Marine Corps bulk and retail fuel missions. His team provides functional oversight for 85 facilities, fuel infrastructure maintenance advocacy and coordination across the military services and the Department of Defense.

CAPT Bogdanowicz is originally from Western New York. He graduated from Cornell University with a BS in Mechanical and Aerospace Engineering and received his commission from the NROTC program in 1991. He received a Masters of Business Administration from the University of Kansas in 2002.

His qualifications include Submarine Supply Officer, Naval Aviation Supply Officer and Surface Warfare Supply Corps Officer. He is a Joint Qualified Officer, DAWIA Level II Contracting Officer and
a member of the Acquisition Professional Community. His subspecialties are contracting and fuels.

DoD P&E: What is the role of Naval Supply Systems Command (NAVSUP) Energy and where are some primary points of operation?

Bogdanowicz: Our command relationship is on several different echelons. My office is responsible for all things NAVSUP in the energy arena. We are part of a subordinate command entitled Mobile Logistics Support, code 70. In that role, we provide support to all of the Navy deep draft fuel terminals co-located with almost all of the supply centers we have.

DoD P&E: What are other roles you address as Director, NAVSUP Energy?

Bogdanowicz: The other role I serve is directly to the Chief of Naval Operations (OPNAV) regarding the execution of fuel policy across the Navy. OPNAV has a role in determining the right instruction for the whole Navy on fuel. We serve as a subject matter expert in support of them as well. Fuel is a truly joint commodity. It’s not Navy, not Army, not Air Force, but a DoD asset that can be used to power joint capabilities without modification. In that respect, fuel owned by Defense Logistics Agency (DLA) Energy and NAVSUP, the Navy’s fuel service control point, essentially makes NAVSUP the liaison between DLA and big Navy, responsible for the joint purchasing function, procurement, and the fuel users who have specific mission requirements for fuel to make them happen. Our job is to take a look at all Navy-specific requirements for Navy ships, Navy aircraft, and other expeditionary forces, then translate them into joint requirements so that multiple DoD missions are made possible. This joint role involves the storing and transferring of fuel so that the Navy’s mission remains the priority, though in many places where NAVSUP operates, the majority of fuel consumption is not Navy. So the business of fueling DoD is really a joint mission. We have to understand all DoD service branch cultures and their unique requirements so we can put them together to form an overall picture of fuel needs across a global DoD enterprise.

DoD P&E: With some of the current day challenges in fuel and re-supply, can you speak to how NAVSUP is addressing some of these in terms of energy sustainment, and maybe speak to some alternative options as well?

Bogdanowicz: There is a fundamental difference between the Navy’s requirements and the rest of the services. We’re maritime so our fuel has to meet requirements to be used at sea, which, without getting too technical, means our fuel has to have a higher flash point or the temperature at which you can ignite the fuel with an open flame. Normal jet fuel is 100 degrees; our jet fuel is 140. Normal jet fuel is called JP-8, ours is called JP-5. Nobody else needs JP-5 in the commercial world. So we have a requirement that makes our fuel unique. Contrast that with Air Force jet fuel; they buy Jet-A in Konas, and Jet A-1, the standard stuff that all the airlines use. So the supply chains have evolved to be much more resilient and flexible on the land-based side.

Another thing worth mentioning is that in Secretary Mabus’s eight years as Secretary of the Navy, his primary emphasis has been on environmental stewardship and strategically moving towards alternative fuel. This line of thought culminated with 2016’s Great Green Fleet Initiative, a culmination of work to develop standards for alternative fuels, such as F-76, a new ship propulsion fuel that the Navy has approved as a 50/50 blend, with a 10 percent blend made from alternative feedstock. In this case it was beef tallow. The proof of concept challenge is to take this up to commercial scale and make this work operationally.

The other thing that’s happened since then is the whole alternative fuel business is reliant upon a relatively high price of crude oil. So, if the crude price goes down globally, it becomes harder and harder economically for companies to make alternatives and make a profit. And so, the hope is that industry gets better over time and the cost curve continues to go down, and then we can make this part of our normal business going forward. The strategic intent is now you’ve got another way to get petroleum; refined petroleum products besides crude oil. If I have long time scale disruptions in the crude oil market, and I’m a net importer, I’ve still got a way to operate my military over a period of years even if I’m not getting reliable imports. We’re a long way from that, but I think the long term goal is to have a more resilient national security strategy that doesn’t leave us reliant upon importing from countries that we may not be able to reliably count on through all the different possibilities of conflict.

DoD P&E: What are the primary test areas for the F-76 fuel variant?

Bogdanowicz: We’re testing for a lot of different types of trace metals. The intent is to slowly have a greater and greater percentage of alternative fuel be part of our normal business. The challenging part is, if you’re going to spend R&D money to try to increase productivity, it has to be likely enough to produce profitability so that the cost curve comes down quickly or expenditures can make any further investment unviable. I think the point that the Navy’s Great Green Fleet effort made is that we can take an alternative fuel and use it for military missions without mission impact.

Bogdanowicz: So, first of all, even though we’re called NAVSUP Energy, what we really are is Navy petroleum. We are experts at the military specification fuels that are used by the warfighter. The way DoD looks at it, and the Navy as well, is to take this stuff and break it into two parts. There’s the consumption side, operational energy, and then there is the supply side, energy.

‘Operational’ is once we’re using energy, or actual petroleum manipulation in the supply chain. My focus is on the industrial base and getting the requirements to them, transporting it and storing it, and giving it to the warfighter.

On the other side of the equation is, how are we using it? There are ways to economize and ways to change usage. One of the primary areas addressed by the Great Green Fleet was in coming up with new operations procedures. For example, when you launch aircraft from a carrier, there is a certain sequence in which aircraft launch, what they do once they get airborne, when they decide to do aerial refueling, and when they bring them back. The Navy took a hard look at it and said, I think there are some different ways we could do this and still meet the mission using less fuel.

Another example is on ships that have two jet turbine engines, such as the L2500 class. They can burn either diesel or jet fuel. Since jet engines like to spin at steady revolutions per minute (RPMs), unlike a diesel engine which operates at variable rates, the way we control how fast the ship goes through the water is by leaving jet engine propulsion operating at a steady rate, and then just change the pitch on the propeller. A greater pitch means you push more water, and hence go faster. If you want less power, you can shut down an engine or just trail a propeller to conserve energy.

The culture the Navy has been trying to address is in incentivizing commanding officers at the operational level to find the right balance between operational risk and readiness on the one hand, and efficiency and conservation on the other hand. And so, that’s sort of this cultural evolution that we’ve been going through. The Great Green Fleet was an attempt to accelerate that.

DoD P&E: What are some alternative propulsion methods the Navy is looking to implement to power ships with energy conservation in mind?

Bogdanowicz: The Navy is looking at diesel-electric engines. We’re building ships that essentially have diesel generators that are making electric power, and then we use electric power to drive the ship. That’s actually a level of efficiency greater than what we have now with jet engine propulsion.

It’s a pretty cool transformational thing for the Navy not having to worry about the expense of ammunition magazines with all the fire suppression equipment that has to accompany the use of gun powder. Not to mention the expense of keeping a gun system operational. Electric-operated weapons systems will be cheaper to operate and cheaper to support logistically, with ranges at least an order of magnitude greater, so, you’re getting a lot more military effectiveness. With greater range for ship-launched weaponry to enemy positions, fewer aircraft will be needed to destroy positions that ships can now reach, saving lives and fuel associated with aviation engagement.

DoD P&E: Feel free to speak to any other objectives you’d like to mention.

Bogdanowicz: We regularly review our posture in terms of where our energy is stored. Our store fuel is for peak-time operating use in ships and aircraft, for normal peace-time missions. We also have fuel that we store for war-reserve, to be able to support our combat engagement plan. There’s been a general awareness that we’ve got some work to do on what we store and where, particularly in the Pacific Command (PACOM) area of operations (AOR). As such, we are taking a deliberate long-term look at our storage strategies, and looking to diversify where we keep our fuel.

We have a pre-positioned fleet full of all the war-reserve materials that we think we’re going to need, so we’re looking at what kinds of afloat capabilities do we want to have. The Navy’s assessment has been that what we have is going to be adequate to meet our needs and, as the threat profile changes, we need to be ready to adjust our strategy to address emerging threats.