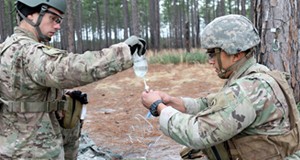 C&CC: How have you seen trends in tactical combat casualty care leaning with the advent of a greater push for prolonged field care capabilities?

SFC Henne: From my experience, I actually started out in the 82nd as a regular 11 bravo infantry man in 2003. The big focus was to stop the bleed. The biggest thing right off the bat as far as progression, as far as the Global War on Terror (GWOT) is concerned, is the availability of equipment and the quality of equipment from the first tourniquets that we’ve seen to the present. The second generation of Combat Application Tourniquet (CAT) that we have now as part of SOF tactics techniques and procedures, including junctional tourniquets, is a testament to greater quality, but also greater diversification in terms of where you’re putting them on the body. Upgrades to accommodate larger body size in casualties as well as weather-related wear and tear are within the scope of today’s requirements.

Change in fluid resuscitation protocol has been a big thing since I came in. In the past, immediate reaction to an operator being shot was to start giving crystalloids, particularly to get a pulse back. You had saline and then fluid alternatives for trauma resuscitative fluid replacement. The evolution in point of injury care has led to a redefining of baseline qualifications of what a SOF medic should know. The idea of prolonged field care has historically seen SOF address challenges in “austere” or clandestine environments. If you look at the evolving battlefield particularly through lessons learned in recent conflicts such as Iraq and Afghanistan, the idea of the “Golden Hour”, as mandated by the Secretary of Defense, has changed. In the not too distant past, an 18 Delta Special Forces Medical Sergeant might be responsible for as much as 72 hours of patient care from point of injury.

Often, you’re looking at low mission signature, where definitive medical care is in the hands of a field operator with evacuation timing dependent on operational tempo and environmental conditions. As the battlefield’s been changing, so have our tactics. And now we’re starting to see, even with the completion of the wars in Iraq and Afghanistan, the GWOT continues and we’re still operational in places where 18 Delta has a primary role. It’s the need to conduct unconventional warfare (UW) that has pushed the envelope in prolonged field care more than anything else.

As the battlefield has changed, the trend has been moving toward being able to get casualties to a point of damage control surgery (DCS) access really fast. With increasing capabilities in damage control resuscitation (DCR), a greater number of casualties can be handled at the DCR level, with some not needing DCS-level care immediately. At the DCS level of higher definitive care, telemedicine is becoming a solution where the logistics of casualty retrieval are complex and field care is prolonged by necessity. Sometimes you’ve got to sit on a casualty for days or even weeks depending on mission set and tempo. And then you can get into real serious constraint of logistical supplies, such as the need for whole blood when medical evacuation is not immediately available.

C&CC: In situations where medical evacuation is not an immediate option, tell us about other ways operators can address casualty needs.

SGM Hayes: In situations where medical evacuation (MEDEVAC) is not an immediate option, you can only put so many bandages on a wound. One of the SOF truths is that we need help from Conventional forces where MEDEVAC may be more robust simply based on mission profile. It’s during these situations where MEDEVAC, combined in some cases with telemedicine, can and will be huge in a prolonged field care situation where a casualty cannot be evacuated soon after injury. From the initial point of trauma where you’re trying to get a person stabilized with DCR care, putting surgical capability at an operator’s disposal through telemedical means if nothing else can be critical to patient survival. In essence, it’s as if we’re able to expand medic capabilities to include treatment of greater injury severity at the point of injury, making positive outcomes much more likely once casualties can be moved to a higher level of care.

A big challenge for SOF is streamlining data integration so you can get connections both back to the point of trauma and forward to the facility, so there’s never a loss of information. Continuing to maintain a data stream, even if not voice, is critical in tracking a casualty from point of injury to surgical care. There are some applications looking at allowing ease of documentation in communication with systems in order to transfer patient data. And when I say track, I’m talking about trending patterns within vital signs type tracking via radio frequencies or telephonic means. From a SOF medic perspective, the big challenge is how to get a casualty from point of injury to definitive care the quickest and in the best shape for higher level care. We start with every 18 Delta having basic field surgical capability with continual fine-tuning where documentation and communication is easier via applications such as telemedicine. We’re bridging gaps as far as moving patients from the point of injury to definitive care by augmenting capabilities within our current kit. I think that’s the way we’ve advanced and will continue to advance. Bringing surgery generally reserved for second and third levels of care right in the field to the point of injury is coming down the pike with automation that medics will be able to use. Pushing assets closer to the point of injury is as important for SOF combat medicine as it is for Conventional. You have two choices, get the injured person to a higher level of care more quickly or bring that higher level of care to the field.

C&CC: From a surgical access challenges perspective, how are SOF medics working to close the gap between point of injury and facility-level care?

SFC Henne: One of our biggest challenges in SOF field medicine is we’re dealing with a smaller, limited pool of surgeons in the military. The Joint Trauma System (JTS) can help offset this reality by implementing changes and adjusting training so that medics have the knowledge they need on the ground to provide definitive care in preparation for the next level of treatment, be it surgical or otherwise. We have seen advancements in quality of care from the Conventional side to include improvements in SOF DCS assets from point of injury to MEDEVAC, bringing higher levels of care to the actual MEDEVAC situation.

SGM Hayes: As SOF continues to work in more austere, remote locations throughout the world, what will continue to be more critical in keeping patients alive from point of injury until we can get them to a surgeon is the availability of whole blood. Along with whole blood accessibility, advances in monitoring and documentation such as special operations systems for tracking patients while they’re being evacuated via Bluetooth while automatically providing care givers access to their medical record, is also critical. This will allow a medic to provide hands-on care to multiple casualties knowing that automation will provide information as to what’s going on with each patient in real time. Most important in my opinion, is how we can intervene and inject dollars into how we’re training medics and point of injury providers so we keep critically-injured folks alive when they reach a surgeon.