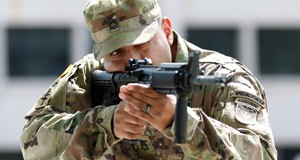 Insurgent activities and low-intensity hostilities are on an upward spiral in many regions of the world, and the mission demands on special operations units are seeing a proportionate increase in number and complexity. The expansion of special operations over the last few years has done much to allow units to meet those missions. To further strengthen the long-term readiness posture by special operations, some fine tuning of the selection and training of these unique forces is underway. The very nature of special operations missions and the intricate, seasoned skills necessary for their execution makes the quality of the individual Soldier a key component to unit preparedness and success.

Yes, that’s right, changes to the Army Special Operations Forces (ARSOF) training pipelines are on the horizon. For those whom the mention of changing the pipeline is an anathema, take a second and breathe. It might surprise you to know that the first paragraph was published in the April 1988 issue of Special Warfare in an article written by Brig. Gen. James A. Guest, who was making changes in the selection process. He was definitely not the first commander to make changes in the training pipeline and, will not be the last.

The U.S. Army John F. Kennedy Special Warfare Center and School, or “SWCS” has a responsibility to assess, select, train and educate every ARSOF Soldier who enters the Civil Affairs, Psychological Operations and Special Forces Regiments. Changes to training are driven by input from the operational force and changes in the operational environment. Looking specifically at the Special Forces Qualification Course (SFQC), significant changes to the training pipeline have occurred more than 30 times over the past 50 years. It is the school’s mission to develop training that enhances the training environment by preserving key tasks and expanding the concepts. In the case of the ongoing changes, the school is focusing specifically on the use of unconventional warfare through resistance. The ongoing optimization will wind resistance throughout the entirety of the course.

Training at SWCS, the Army Special Operations Center of Excellence, is among the toughest and high-risk training offered throughout the armed forces. There is a reason for that: ARSOF Soldiers often conduct operations far from the flagpole, when they are often the only U.S. presence in a country, as such, they require a unique skill set that cannot be mass produced. With that in mind, during an “All Hands” with the members of the SWCS enterprise in August 2018, Maj. Gen. Kurt Sonntag, SWCS Commander, asked a question that many of his predecessors have asked before: “How do we transform the enterprise and organization structure to ensure doctrine and training prepares civil affairs, psychological operations, and Special Forces personnel throughout their careers to effectively operate as a multi-functional team in the current and future environments given operational requirements and institutional constraints?”

From that question came five new lines of effort (LOE):

On Oct. 18, 2018, Col. Michael Kornburger, commander, 1st Special Warfare Training Group (Airborne) brought the first of a three part plan to Maj. Gen. Sonntag. Col. Kornburger’s briefing outlined the optimization of the SFQC. Historically, changes to the SFQC have received the most attention and scrutiny, ensuring that the SFQC optimization plan was spot-on and builds upon the ongoing optimization of Civil Affairs and Psychological Operations courses.

“This is the first step in our optimization,” said Maj. Gen. Sonntag, when addressing his staff. “Over the next seven months, many members of our staff will be involved in this process, with a projected transition starting in June 2019. This is a big step forward, but it cannot stop here. As the SFQC cadre and staff work through this process, leaders throughout the command will look at all SWCS training in an effort to make comprehensive changes that will prepare our Army Special Operations Forces to support the current and future range of military operations across the entire conflict continuum.”

Under the direction of the 1st Special Warfare Training Group command, the staff took a comprehensive look at the course from start to finish and recommended numerous changes that would cut at least three months from the current SFQC by reducing the total training time from the start of the SFQC to the Regimental First Formation to 24 weeks, and would allow for four starts each year, versus the current six starts. Under the new plan, the four-start model would go into place in June 2019. The production model accounts for 240 students starting each iteration, with 48 students in each military occupational specialty.

The new training model bears a resemblance to the outline of the current SFQC for officers. Under the optimized program, training will focus first on individual skills, with training focusing on individual skills development. The first week of training remains the Special Forces Orientation course. It is followed by a 13-week period that includes the 10-week, MOS phase for 18 Alphas, Bravos, Charlies and Echoes and the three-week Survival, Evasion, Resistance and Escape course. Following completion of Phase 1, candidates will be divided into an Operational Detachment-Alpha construct, nested within the Pineland training scenario, which is the culmination exercise for Special Forces training. The second phase of the SFQC is considered skill application and collective training. During a seven-week period, Soldiers operating as an ODA will practice their tactical skills, which include common core, small-unit tactics, foreign internal defense, unconventional warfare and a UW scenario. Following a brief break in training to refit, Soldiers will then move into the Robin Sage culmination exercise, which is three weeks, and upon completion will participate in the Regimental First Formation.

Time savings made in this portion of the training is realized by the ODAs alternating training during the first seven-weeks, which accounts for the current number of cadre being able to carry the increased student load. Col. Kornburger and his staff believe that the emphasis on individual skills, coupled with the ODA collective training will improve the outcomes of students, who in the past may have been recycled. At the start of collective skill training, the tactical skills portion, students will be organized into ODAs with a Cadre Team Sergeant that is responsible for the mentorships of students on his ODA. These Cadre members will follow the ODA throughout tactical skills and Robin Sage to provide additional coaching, teaching and mentorship in addition to daily instruction. With each student already trained in their MOS, this provides a jumpstart to understanding their role on an ODA in the operational force.

Following the RFF, Soldiers will rotate through the 24-weeks of language training and the four weeks of military free fall. When it is all said and done, the new course will be comprised of 53 weeks of total training time for all military occupational specialties except the Deltas, whose MOS training is considerably longer than the military occupational specialties. The Delta graduates total training time if completed without recycle is 95 weeks.

Key to the success of the new program is the early introduction of resistance and ODA operations, and the reinforcement of their importance throughout training. The new course also allows for CA, PSYOP and SF trainees to interact throughout training, which is how ARSOF operates in the competition and conflict phases. While increasing the success of students in the course, the transition of the SFQC to a four-start production model maximizes resources while providing sufficient training capacity. Cadre members have more of an ability to teach coach and mentor when individual training is a priority. The collective training enhances the learning environment while increasing the understanding and comprehension of SF missions.

While the full roll out of the optimized course is scheduled for full implementation by September 2019, partial implementation is proposed for the spring and summer iterations for the SFQC, which allows the 1st SWTG(A) time to stagger MOS and SERE and start tactical skills with the requisite number of students to fill an ODA.

Col. Kornburger noted that while the changes are necessary, they will not be easy.

“We are under no impression that this is going to be an easy transition. The implementation reflects time marked for training development for each phase,” he noted. “Our cadre and staff have an arduous task in front of them, but we have a professional cadre that understands the importance of getting competent, physically fit and hardworking SF Soldiers to the operational force.