Optimizing Care Forward Pandemic and Beyond 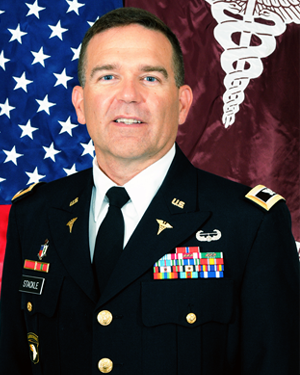 Colonel Stackle began his Army career after graduating in 1997 from Gonzaga University where he also served as the student body president. He received his Doctor of Medicine degree in 2001 from Georgetown University School of Medicine and went on to complete his Family Medicine residency at Tripler Army Medical Center, Hawaii, where he served as Chief Resident.

After completion of his residency training, Colonel Stackle commanded the United States Army Health Clinic Babenhausen, Germany, from 2004 to 2006, and served as the Medical Director for the Army Medical Department’s Armed Force Health Longitudinal Technology Application (AHLTA) Program Office in Washington, D.C., from 2006 to 2009, part of which he served with the 526th Brigade Support Battalion, 2nd Brigade Combat Team, 101st Airborne Division, during Operation Iraqi Freedom. In 2011, Colonel Stackle completed the Madigan Faculty Development Fellowship during which he earned his Masters in Business Administration from Pacific Lutheran University. After completion of his fellowship, he served as a faculty physician with the Eisenhower Army Medical Center Family Medicine Residency Program at Fort Gordon, Georgia, before serving as Family Medicine Residency Program Director at Womack Army Medical Center at Fort Bragg, North Carolina from 2012 to 2015. Subsequently, he was assigned as the Deputy Commander for Clinical Services at US Army Medical Activity Japan from 2015 to 2017. From 2017 to 2019, Colonel Stackle served as the Command Surgeon for the 4th Infantry Division at Fort Carson, Colorado and deployed as the United States Forces Afghanistan Command Surgeon in support of Operation Freedom’s Sentinel and Resolute Support. Colonel Stackle’s most recent assignment was a one-year assignment at the United States Army War College in Carlisle Barracks, Pennsylvania where he earned his Masters in Strategic Studies degree in 2020.

COL Stackle: I currently serve as the Commander of the U.S. Army Institute of Surgical Research (USAISR) under the U.S. Army Medical Research and Development Command (USAMRDC). USAMRDC is a component command of the U.S. Army Futures Command (AFC) – the Army’s lead modernization organization. As the Army’s premier medical research organization focused exclusively on the combat wounded and home of the only Burn Center in the Department of Defense, our primary mission is to “Optimize Combat Casualty Care.” The medical research activities performed at the USAISR are focused on saving lives on the battlefields of today as well as preparing for future combat scenarios involving Large Scale Combat Operations in a Multi-Domain Operating environment.

C&CC: How has the COVID-19 pandemic affected your staff and their ability to accomplish its assigned missions?

COL Stackle: Our staff at the USAISR are the organization’s most precious and valued asset. Our foremost priority over the past twenty months of the pandemic has been maintaining the safety and wellbeing of these cherished teammates. It is because of the talented men and women within the USAISR that our institute has helped achieve the lowest combat casualty rates in modern warfare over the past two decades. Our dedicated team members helped accomplish this by developing materiel and knowledge advancements which revolutionized how medical care is delivered in combat. Some of the USAISR’s most notable contributions over the past twenty years include the development of the Combat Application Tourniquet, advances in Damage Control Surgery and Resuscitation, the introduction of the Burn Navigator decision support tool, and the novel use of blood products at the point of injury, to name a few.

The ability to achieve these lofty accomplishments have not been easy since early 2020. The COVID-19 pandemic impacted our organization just like it did many others around the world. Our staff demonstrated their tremendous agility by learning to work remotely, collaborating across virtual platforms, and demonstrating the ability to continue our important research and patient care missions without missing a beat.

The pandemic also created new opportunities for the USAISR to serve the nation. When the rising number of hospitalized patients in south Texas threatened to overwhelm Brooke Army Medical Center (BAMC), the USAISR mobilized the entire team to convert our vivarium into a 70-bed human hospital. We also deployed enlisted Soldiers in 2020 to support a regional blood bank to collect samples of COVID convalescent plasma which was one of only a few available treatment options at the onset of the pandemic.

Our clinical team in the Burn Center expanded the scope of patients they care for as well. As a result of the Burn Center’s unique expertise in Extra-Corporeal Membrane Oxygenation (ECMO) therapy, the physicians, nurses, and other health care staff provided this advanced life support therapy to numerous critically ill patients with COVID-19 infection. The USAISR Burn Flight Team, the military’s only rapid deployment medical team specializing in the care of burn patients, leveraged its critical care expertise to support the transport of over 36 patients suffering from severe COVID-19 infection from locations around the world back to BAMC for ongoing care. It is this type of ingenuity and innovation which highlights just how blessed the Army is to have such a group of dedicated personnel within its ranks.

C&CC: How is the USAISR preparing to address the challenges of the future battlefield and what new capabilities is the organization working on currently?

As outlined in the National Defense Strategy and its supporting documents, we understand that military doctrine is shifting away from the counter-insurgency operations we conducted in Iraq and Afghanistan toward Large Scale Combat Operations in a Multi-Domain Operating environment. Our nation’s focus on competing with more capable adversaries means significant changes in the medical challenges which will be found on the future battlefield. We have to adjust our paradigm of research away from injuries by improvised explosive devices, rocket repelled grenades, mortars and small arms to more sophisticated and lethal weapons. We also have to keep in mind that the past conflicts consisted of low casualty numbers and rapid evacuation of casualties to surgery. We must shift our thinking to a new set of scenarios which will involve high casualty densities with delayed evacuation to surgical care.

In a Multi-Domain Operating environment our troops will be faced with varied threats like cyber weapons, long-range precision fires, and robust enemy aerial defenses. The impact of these threats will be a requirement for widely distributed forces which will likely face impaired communication and situational awareness. There will be contested air evacuations and increased distances to protected support areas where Role 3 hospital will likely be located. As a result of this complex and contested operating area, casualty evacuation may be delayed for 72 hours or longer.

In order to address these new challenges, the USAISR has re-organized our combat casualty care research teams to optimize our research. We have streamlined our research into six combat casualty care research teams or CRTs in what we call the 5+1 Pillars Model. We created five physiologic focused teams (pillars) plus a sixth team that provides overarching support to the other teams. The six CRTs are: CRT1—Blood and Shock Resuscitation; CRT2—Hemorrhage and Edema Control; CRT3—Organ Function Support; CRT4—Combat Wound Care; CRT5—Pain and Sensory Trauma Care; and CRT6—Engineering, Technology, and Automation whose efforts span all the other CRTs.

The mission of CRT1 (Blood and Shock Resuscitation) is uniquely focused on delivering solutions to decrease mortality and morbidities on the battlefield by leveraging efforts towards cellular hemorrhage control, prevention of hemorrhagic shock, and development of products and approaches to resuscitate combat casualties. Our current efforts include:

The mission of CRT3 (Organ Function Support) is to deliver materiel and knowledge products that enhance Soldier survival at the point of injury and during prolonged care outside of a hospital. CRT 3’s focus is on the mitigation of organ dysfunction resulting from traumatic injury. Their current efforts include:

The mission of CRT5 (Pain and Sensory Trauma Care) is to identify novel approaches for treating trauma-induced pain as well as research to repair and restore the sensory system (Ocular and Auditory trauma). This group’s efforts include:

With this reorganization and its emphasis on a multi-disciplinary team approach to research, we are confident that we are poised to support the Warfighter and continue to provide the combat casualty care materiel and knowledge products for prolonged field care in a Multi-Domain Operating environment.

C&CC: What are some of the innovations USAISR is focused on for future battlefields?

COL Stackle: Our fundamental challenge moving forward is how we will be able to preserve recent gains in battlefield survival without rapid access to blood and surgery. The biggest reason for our reorganization into the six CRTs I mentioned is because we know that we can’t just continue doing what we’ve been doing for the past two decades. We need some revolutionary breakthroughs to maintain anything close to the high survivability rates of our recent wars in the Middle East.

Progress in trauma care has been slow and incremental in recent years, and we absolutely must achieve transformational progress to address the more complex and more lethal battlefield of the future. In a Multi-Domain Operating environment, medical evacuation times will be prolonged, there will be larger numbers of casualties and there will be limited access to lifesaving interventions such as blood transfusion and surgical care. In this environment, we will not be able to achieve 90 percent plus survival rates that we achieved in Iraq and Afghanistan with our current capabilities. As a result, our goal at the USAISR is to extend the pre-hospital survival window from the “golden hour” to the “golden day” for as many casualties as possible using new approaches to keeping tissue viable; preventing and treating wound infection; controlling pain; and most importantly, keeping Soldiers in the fight.

Achieving the goals outlined above will not be easy. The challenge facing our team of dedicated clinicians, scientists and researchers is an immense one. We believe, however, that our ‘5+1’ Research Pillars Model, which organizes our research efforts around the physiology of trauma, gives us the best chance to achieve some of those transformational breakthroughs we need.