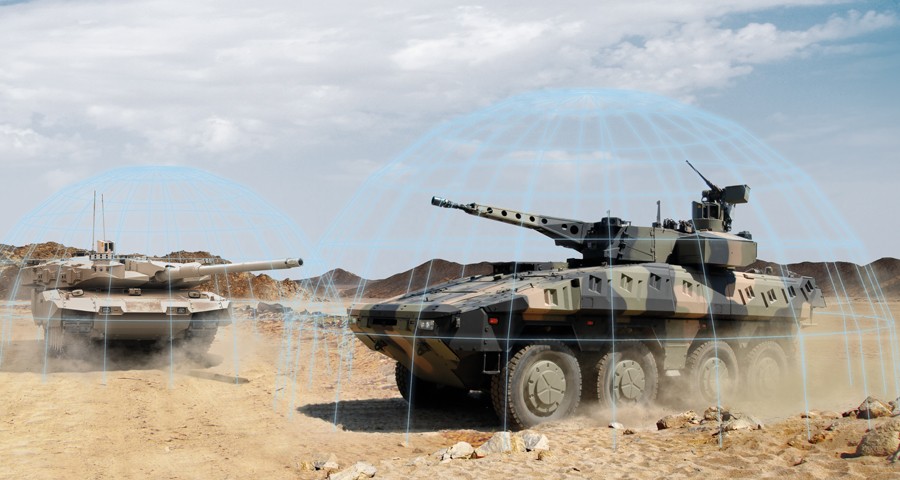 Original Active Protection Systems (“APS”) were launcher-style solutions developed more than 10 years ago. These first-generation APS were designed primarily to protect main battle tanks – the only vehicle capable of accommodating the system’s considerable weight and power requirements. Today’s modern militaries demand a more capable, modular solution that can be rapidly fielded on a variety of current and future combat and tactical vehicles. This next-generation APS will very likely be a distributed system that’s been developed from the lessons learned through deployment of the earlier launcher concept. Now, after numerous vehicle integrations and nearly 900 live fire tests against a wide range of anti-armor threats, the German company ADS has made this distributed APS concept a mature and deployable reality. ADS, a member of the Rheinmetall Group, has developed and fielded a system that is specifically designed to improve on earlier launcher-based APS technology. So what’s the difference?

As with any type of defensive system, adversaries seek to identify and exploit weaknesses. After initial encounters with launcher-style APS, one early lesson learned was that these systems could become saturated by coordinated attacks aimed at the same location on the target vehicle. These simultaneous attacks were able to overwhelm the APS because the system’s launcher-based design resulted in a delay between intercepts and typically limited to two the number of threats that could be defeated before reloading was necessary. To address this issue, the system ADS-Gen3 was designed with a series of redundant sensors and explosive countermeasures that can defeat up to 3 attacks in any area of the vehicle, and can do so in multiple locations – even when these incoming threats are being launched and intercepted simultaneously.
The second important lesson learned by potential adversaries was that launcher-style APS are limited in their Minimum Defeat Distance or “MDD”, the shortest distance from which a threat can be intercepted and successfully defeated. For a launcher-style APS, the MDD is typically 60 meters or more, depending on the speed of the incoming threat. Should an adversary attempt to attack within the MDD, they put themselves at greater risk of detection and counter-attack. Because the ADS system is able to react much faster than first-generation launcher-style systems, it can intercept threats fired as close as 10 meters from the vehicle, thereby eliminating an adversary’s ability to attack within the system’s MDD.
The ADS system’s incredible speed and ability to defeat threats when they are in close proximity results in three other critical advantages. First, ADS sensors only survey to within a distance of 35 meters from the vehicle so the system’s power requirements and radar signal output are both relatively low as compared to other APS. In contrast to the longer range radars that launcher based systems need in order to have time to react, ADS-Gen3 radar’s short surveillance distance favors a high radar resolution, enabling the system to detect low radar-profile attacks (as with some Russian-made RPGs) and coordinated or streamed attacks fired within a fraction of a second (as demonstrated when the German Armed Forces tested the system by firing simultaneously on ADS-Gen3 within 0.1 seconds). Second, the system’s MDD, in combination with its low-power radar reduces the risk of mutual interference when vehicles equipped with ADS-Gen3 operate in close proximity and, therefore, its deployment does not affect current fighting or electronic warfare doctrines. Third, because threats are defeated close to the target the intercept is very precise and rarely results in a high order detonation of the incoming threat or the formation of a jet that could potentially defeat the vehicles passive armor. This is a key difference and one that minimizes the potential danger to any dismounted personnel or non-combatants.

As the U. S. Army moves toward a modular framework for its future APS requirements, a scalable and distributed system like ADS takes advantage of valuable lessons learned from earlier systems to provide a Next Generation APS solution that can be tailored to many different vehicle platforms and is easily upgradeable as improvements in technology become available.