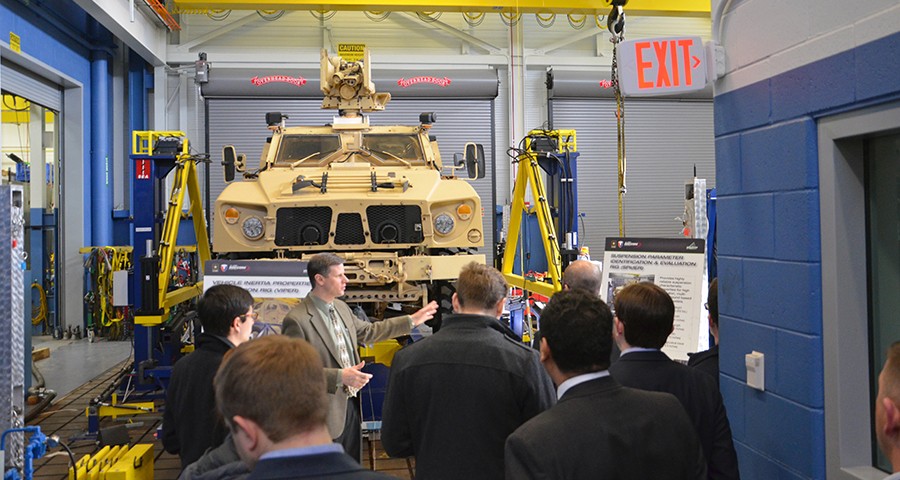 U.S. Army Tank-Automotive Research, Development and Engineering Center (TARDEC)S developers are using the requirements from Abrams, Armored Multipurpose Vehicle (AMPV), Bradley, Ground Combat Vehicle (GCV), & Stryker to develop an alternative electronic power architecture that can work for all of these vehicles. “This will allow the Army to standardize around MIL-PRF-GCS600A for 600VDC much how the military uses MIL-STD-1275 for 28VDC systems on all vehicles today,” said Mr. George Hamilton, TARDEC. The Army’s Next-Generation Combat Vehicle Electrical Power Architecture. NGCVEPA concept is expected to provide vehicles with the infrastructure necessary for high power loads such as energy weapons and electrical active defense systems on ground combat vehicles. “The leap ahead technology we are developing in parallel to the architecture is Silicon Carbide (SiC) & Gallium Nitride (GaN) power electronics,” remarked Hamilton. “These technologies should allow us to see a 2-4x increase in power density while operating at higher temperatures as compared to the silicon technologies available today.” Hamilton went on to say that “Being weight or space neutral requires electrification of hydraulics, size reductions that silicon carbide (SiC) provides, and shrinking of computing systems. While being space and weight neutral, these efforts bring much greater performance and new capabilities when combined together into a system. SiC is one part of the solution set.” he emphasized.

An effort completed by the Army in 2009 involving electrification of a Stryker vehicle with the Common Modular Power System (CMPS) solution very similar to what is found on the M109A7. For that effort, the electric fan and inverter required liquid cooling to be provided. “With the thermal performance SiC carbide offers, we are expecting to receive an air-cooled SiC based fan which will have identical cooling performance to the electrified fan on the 2009 CMPS effort,” said Hamilton. “This reduces the amount of connections required and significantly simplifies the component integration.” Additionally, SiC is allowing TARDEC to utilize a 105C cooling loop for the other SiC components which means the power electronics radiator can be significantly smaller. “The future plan would be to combine the engine cooling loop and the power electronics cooling loops into a single loop,” noted Hamilton. “Traditional systems require separate cooling loops because militarized power electronics cannot exceed 80C with silicon.” TARDEC SiC components being developed are 100% backwards compatible with existing starter generator power systems. Components will be roughly 50% smaller and lighter and require half the coolant flow of the components they are replacing. “Right now militarized high voltage connectors are the largest cost of our components,” remarked Hamilton. “These components are not cheap, but we have learned that SiC is no longer the cost driver. It is connectors and cold plates used within our devices. Finding ways to bring these costs down will be one of the follow-on activities after our SiC system is completed.”