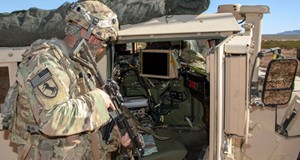 New Army mission command systems have rolled out throughout this past year, most notable of which are updated software and hardware that reduce network complexity and the size of systems, enabling both unit mobility and simplified command post operations.

The Army’s vehicle fleet is in the midst of a far-reaching effort to modernize the integrated mounted friendly force tracking system. This approach, which will “pure fleet” more than 103,000 platforms across the service, is delivering Joint Battle Command – Platform (JBC-P) hardware and software to all Active Duty, National Guard, and Army Reserve units.

JBC-P provides simple and intuitive mission command on-the-move, situational awareness, and command and control down to the platoon level, and supports incremental improvements over time to adapt to evolving threats.
“JBC-P is a critical capability that enables leaders to make informed decisions and conduct mission command from anywhere they choose,” said Dan Ghio, deputy product manager for JBC-P. “It provides a joint ground solution and is accessible to allies and coalition partners to support the Army’s interoperability priorities.” Since the effort began in 2018, 146 units have been fielded the JBC-P capability including 73 Active Duty, 46 National Guard, and 22 Army Reserve units.

Another impetus behind TPF missions is the vehicle density list (VDL), a document specific to every unit that determines necessary installation kit hardware and manpower resources for each fielding. To further reduce fielding delays, PM Mission Command has allocated additional time and manpower resources to the planning phase to ensure all documentation is properly completed.

“The VDL is executed via a survey conducted by a fielding team representative, a unit representative or both. If the VDL is not completed in a timely manner or is incomplete with missing data, the TPF mission is at risk of being delayed,” said Ghio.

Of the remaining 265 units yet to be fielded JBC-P, 111 are Active Duty, 87 are National Guard and 67 are Army Reserve units. Based on the current basis of issue, all units are on track to see completed fielding by 2024.

The JBC-P program office is also developing the future software upgrade to JBC-P called the Mounted Computing Environment (MCE). MCE will provide future capabilities to host third-party science- and technology-driven applications as well as those developed by Industry partners, and will converge multiple warfighting functions onto the COE. The software is currently being developed and will be taken to multiple units and user juries through DevOps agreements to gain direct user feedback of the software and help shape the future needs and gaps in the Army’s mounted mission command software.

Key to providing Army commanders with a simple, intuitive and single common operational picture (COP) is the Army’s COE effort comprised of six computing environments. The most mature of these, the Command Post Computing Environment (CPCE), along with the handheld and mounted environments aim to provide an easy-to-use COP through a single mission command suite operated and maintained by Soldiers. Program management offices from the Army’s Program Executive Office Command, Control, Communications-Tactical (PEO C3T) and PEO Soldier recently conducted operational assessments and tests of these computing environments and are now poised to advance CPCE fielding to additional units for continued experimentation and operational use. Versions of the handheld capability will also be delivered as part of the Integrated Tactical Network (ITN) effort. The ITN provides critical connectivity and mission command applications to lower echelon units as part of the Army’s network Capability Set 21 fielding to four Infantry Brigade Combat Teams (BCTs) starting in 2021.

CPCE provides a software and server hardware framework (common interface, data and services) upon which warfighter applications can be converged and future applications can be built. The initial version of CPCE underwent operational test as part of Network Integration Evaluation 18.2 at Fort Bliss, Texas and has been under continuous DevOps with user units since 2018. According to commanders’ feedback, CPCE provides significant operational capability over current Army command and control systems but still needs functionality improvements, which are underway as part of continued DevOps.

“CPCE is definitely a more intuitive and user-friendly system for command post operations than anything else we have used in the past,” he said. “The server and bandwidth requirements are a fraction of what we have previously used, which makes it much better suited for both expeditionary and steady-state operations. The interface is easy to pick up, and we have been able to quickly get our battle staff up to speed on its functionality.”

One example of continued DevOps is the enhancement of CPCE collaboration tools. During Warfighter events, units expressed concern with CPCE’s ability to support collaboration through live briefing tools, such as real-time map-boarding and mark-ups on the map. The commercial CPCE software was not designed for this functionality and adding it quickly has proven technically challenging due in part to tactical operational environments with low network throughput and latency.

After the recent Warfigher 19.4 exercise, the developer optimized the software to improve responsiveness of built-in briefing tool functions. The new software was also rolled into the recently completed Joint Warfighter Assessment (JWA) 19. During operations, U.S. and coalition forces were able to use the CPCE briefing tool with great effect. Feedback from that exercise was markedly improved from prior events, and the Army’s Test and Evaluation Command noted that “with increasing fluidity and effect throughout the event, subordinate units were able to digitally orient their higher headquarters to where on the COP they were focusing and then highlight specific areas for detailed updates.” Updates to the briefing tool will continue through DevOps and the program delivery schedule of new baseline CPCE software incorporating these updates and others is targeted for 2QFY20 to support the Defender 2020 exercises.

Additionally, to improve system performance and to mitigate unnecessary data flow over constrained tactical network transport bandwidth, program managers and developers are working to address underlying data analytics, data dissemination and federation associated with the use of CPCE. These major efforts will be key focuses of Capability Set 23 development.

PM Mission Command will also be rolling out its latest Tactical Server Infrastructure, or TSI, variant to units being fielded CPCE. TSIv2 provides several improvements over the legacy Battle Command Common Services server stacks including an 800-pound weight reduction, a 50 percent reduction in setup and teardown time, and a reduction in the number of transit cases from nine to three, significantly increasing agility.

Last year also marked the launch of an Army program to provide modernized mobile, scalable and survivable CP platforms. Key to the effort is identifying and providing a balance between mobile, survivable CPs while allowing commanders and staff sufficient flexibility to tailor the command post to support different mission sets. Meanwhile, a challenge exists in affording the capability to conduct collaborative work with an environment where mobile CPs may have to be dispersed.

The Army is executing CPI2 in increments. Culminating now, in the first step of the first increment, the Army equipped selected units with mobile platforms, secure wireless and intelligent power solutions. Within the first increment there are two efforts – one led by the Army’s Forces Command (FORSCOM) and the other by PEO C3T. The FORSCOM lead activity allowed units to conduct their own integration of systems onto platforms in order to inform future command post designs. Units provided comments, suggestions and lessons learned through command post design workshops and field exercises. FORSCOM published an assessment report and recommendations in July.

The Army approved an acquisition Milestone A decision in January 2019 enabling the second effort of the first increment. This effort, led by PM Mission Command, manages the follow-on formal design, integration and CPI2 prototyping. PM MC will work with industry via an Other Transactions Agreement (OTA) and the Army’s Combat Capabilities Development Command (CCDC) C5ISR Center to enable integration of solutions across the C4ISR spectrum. This effort will be supported by project management offices across the Army including PEO Ground Combat Systems and PEO Combat Service & Combat Service Support.

The Milestone A decision authorized the project office to begin what is known as Technology Maturation and Risk Reduction. This effort will execute competitive prototyping for brigade combat team designs. One BCT is planned to be a government design through a support agreement with the CCDC C5ISR Center, while the other BCT will be an industry-driven design. Both BCT configurations will enable the Army to experiment to inform future command post decisions.

In some cases, the CPI2 program is arranging for the acquisition of select platforms such as the Family of Medium Tactical Vehicles, which will be integrated with C4ISR systems provided and integrated by CPI2 or other programs of record. In other instances, such as with the AMPV and JLTV, these programs of record are already providing mission command variants that will be fielded with capabilities required for command post operations. CPI2 will also support the integration of any additional capabilities that may be required.

CPI2 platforms will exist from the corps to the battalion echelons. Product Manager CPI2, assigned to PM Mission Command, plans to field two BCTs in 2020 and conduct early user tests. The remaining three BCTs will be fielded in FY21-22. CPI2 will also field one Corps and one Division Mobile Command Group (MCG) as well as one mobile CP solution for a Division HQ MAIN Command Post.

So far, HQ FORSCOM has designated 3rd Brigade Combat Team, 101st Airborne Division; 2nd Stryker Brigade Combat Team, 2nd Infantry Division; 4th Infantry Division for both the MCG and DMAIN; and I Corps for the Corps MCG as participant units in CPI2 Increment 1. The CPI2 product management office has been in coordination with most of these units and design activities are already underway. Soldiers are actively encouraged to contribute innovative ideas that can be integrated in the formal designs. Unit participation in the design process is a foundational element to CPI2 successfully providing mobile CP solutions.

The Army’s pursuit of its Multi-Domain Operations (MDO) 2028 concept relies heavily on the rapid and continuous integration of new and emerging capabilities through the service’s network modernization strategy. Since near-peer adversaries will disrupt friendly communications and plans, mission command must expand to enable initiative and dynamic cooperation across the service to preserve the ability to continuously and rapidly integrate multi-domain capabilities.