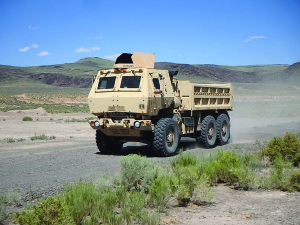 The evolution of the U.S. Army’s Family of Medium Tactical Vehicles (FMTV) has seen critical modifications in keeping a key component of its ground vehicle capability relevant and ready.

Recent contingency operations drove an increased need for crew survivability and electrical power to support a growing network of important systems. Yet the current FMTV fleet wasn’t designed for all of the additional weight or power demand, and upgrades and improvements are pushing the limits of its performance envelope. The FMTV fleet’s capacity to accept further operational enhancements without payload reduction and/or performance degradation is limited, and so the Army is investigating changes to ensure its continued ability to support future operations.

Once upon a time, a truck was simply a truck, but that grows less true every year. Particularly as communication networks, sensors, and other new technologies become essential systems, our trucks’ character has changed too. Our challenge is to evolve the FMTV so that it remains a viable resource on the battlefield—balancing requirements for different mission roles, capabilities, and survivability requirements.

Across the fleet, we know we need to continue incrementally modernizing our vehicles, and recent analyses demonstrated that mature, commercial technologies exist that can allow us to gain back system payload and performance without sacrificing protection or the power Soldiers need to meet increasing demands for C4ISR systems.

The Army is now prepared to begin a competition for a series of Engineering Change Proposals (ECPs) to upgrade our current design and the begin producing the next generation of FMTVs—leveraging competition and focusing on affordability. This effort is intended to rebalance the Iron Triangle (protection, payload, performance) and restore performance while decreasing the burden placed on Soldiers driving the truck. At the same time, we want to plan smartly for future demands by providing a margin for growth in engine power, electrical power, and payload, as well as incorporating essential safety technologies. Specifically, we seek for the FMTV A2 to incorporate:

Underbody protection, which has already been tested and proven that it can provide improved protection in possible contingency environments.

A higher output 24V alternator, which reduces complexity and simplifies troubleshooting, along with an upgraded data bus to enable units to integrate improved driver safety capabilities and provide for condition-based maintenance.

FMTVs for the Long Term

Of course, even as we begin this effort we also recognize that many of the Army’s current FMTVs and FMTV-variants—used for both transportation and as part of other systems like HIMARS—will be in the fleet requiring sustainment for years to come. Managing the fleet we have is essential to today’s Army, including obsolescence challenges as vehicles age. Intelligently divesting of older trucks and making smart decisions about a balance of armored, armor-capable, and non-armored vehicles in the fleet is essential to effective program management over the long term.

Working with a top-notch team of civilian and military professionals, the MTV team is committed to providing the best for America’s Soldiers. PM MTV has a wealth of knowledge and experience with tactical wheeled vehicles and works diligently to build relationships across our stakeholders. The team maintains a keen eye on the future by developing strategies for the A2 program, maintaining the correct fleet model mix, sustaining the legacy fleet through the life cycle, and looking to future technologies for continued product improvement like active safety technologies. They continue to amaze me by finding intelligent and innovative ways to leverage resources, build consensus, and implement real solutions that ultimately benefit the Soldier and accomplish the mission. PM MTV has truly made a positive and lasting impact on the tactical wheeled vehicle community and will continue to do so for decades to come.