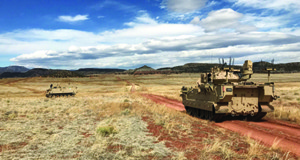 The Army and Army Futures Command (AFC) remain committed to modernizing ground combat vehicles with the survivability, lethality, and advanced capabilities to deploy, fight, and win the future fight. The Next Generation Combat Vehicles Cross Functional Team (NGCV CFT) works across the Department of Defense and industry to lead the modernization process and develop the best capabilities that will enable the future success of our mounted Soldiers and formations. Despite the impacts of the recent COVID-19 pandemic, progress continues on the Army’s priority efforts maintaining momentum for Army modernization.

The past several months have seen critical developments for the NGCV CFT’s signature efforts. Most recently, the Army initiated a refined trajectory for the Optionally Manned Fighting Vehicle (OMFV) program, continued experimentation with Robotic Combat Vehicles (RCV) and made significant progress for both the Mobile Protected Firepower (MPF), and Armored Multi-Purpose Vehicle (AMPV) programs. The goal of the NGCV CFT, working closely with partners in the Program Executive Office (PEO) Ground Combat Systems (GCS) and the Combat Capabilities Development Command (CCDC), remains constant – to get the best equipment to our Soldiers, rapidly addressing capability gaps to maintain overmatch of the Army’s fighting units around the world.

Last January, the Army made a bold decision and cancelled its solicitation for OMFV prototypes and entered a new phase in the program. The decision to cancel the solicitation hinged upon the ability for the Army to maintain manageable risk and still achieve the Army’s objectives. As the Army pushes the modernization process, the initial prototype solicitation reached exceptionally far by requiring a very aggressive set of initial capabilities on an equally aggressive timeline, extending the limits of what our partners in both government and industry could provide.

To be clear, the Army is absolutely committed to the OMFV program and achieving transformational capability for Armored Brigade Combat Team (ABCT) commanders to maneuver on a multi-domain, highly-lethal battlefield while defeating the future peer and near-peer threat with stand-off capabilities. Despite the resulting delay in the program, the initial solicitation provided valuable lessons learned and sent a clear message about the Army thinking differently.

Immediately following the cancellation of the initial prototype solicitation, the Army began a detailed and open process to get feedback from government and industry partners. This process included one-on-one engagements with traditional and nontraditional vendors, a review of written feedback, and further direct engagements with industry and government partners. Through these collaborative efforts, AFC adjusted the approach to the traditional requirements process by defining an initial set of nine system “characteristics,” which the Army will refine through detailed technical and operational analysis, evaluation of industry preliminary digital designs, dynamic modeling and simulation testing, and Soldier touchpoints.

The resulting requirements strategy preserves flexibility much longer into the acquisition process before necessitating significant hardware investments. The Army and industry will work together to capitalize on collaborative tools for systems design further allowing informed decisions on capability needs, trades analysis, and technology insertions. The OMFV must provide the Army with new capabilities to solve emerging threat challenges as well as supporting enduring ground combat missions. Replacing the Bradley does not mean applying new technologies to legacy assumptions and concepts for mounted warfare. The OMFV must help drive Army transformational concepts for future Cross Domain Maneuver.

Transformational development requires a system capable of technological and tactical adaptation and growth over decades to come. A transformational ground combat system is one that maintains lethality overmatch against the threat, allows commanders and crewmembers to make decisions faster with enhanced sensors and decision aids, employs adaptable computational abilities, and protects its crew and infantry while continuing to fight adversaries with more and more capable systems of their own. The OMFV must enhance the combat potential of the mechanized infantry, providing advanced situational awareness to the occupants of the vehicle, between vehicles, and with dismounted Soldiers supporting maneuver with organic direct fires. To be transformational, the OMFV must also support the formation’s ability to operate semi-independently, maneuvering extended distances, with reduced demand on Army logistics and sustainment systems. Transformational development is not just creating an evolutionary ground combat platform with current technology, but also requires new concepts for the unit in combined arms Cross Domain Maneuver against the pacing threat. It is paramount that the OMFV achieves capability beyond parity and extends decisive and sustained overmatch long into the future.

Concurrent with this new approach to requirements development, the Army is also embarking upon an innovative approach to the program acquisition strategy. The refined strategy focuses on encouraging innovation and maximizing competition through a collaborative five-phase process. The OMFV phases include: strategy and process refinement, preliminary digital design, detailed digital design, prototype design and testing, and finally, production and fielding. Throughout this process, Soldiers will assist the Army and industry partners in refining the vehicle’s characteristics and design informing the most feasible and acceptable set of technical requirements for final production.

This approach is new and different, breaking some of the traditional processes in major Army acquisition programs and will be uncomfortable to those most wedded to the traditional way of doing things. Some partners will thrive in this new environment, however it will not be without challenge especially when applying this strategy to a complex combat vehicle program. The Army understands there is risk in innovation and continues to identify mitigation strategies share in the costs, better enable positive business decisions and to maintain competition. This strategy is the approach the Army must take to harness the power of innovation of worldwide industry partners, drive new ideas through competition and produce the OMFV that our Soldiers require to fight and win in the modernized Army on the future battlefield.

The past several months also saw several big developments in the RCV program. The objectives of this program remain largely unchanged with three increasingly complex Soldier Operational Experiments (SOE) planned over the next four years. The Army is on a deliberate path to determine the utility and viability of effective and lethal manned-unmanned teaming (MUM-T) for ground combat vehicles by deliberately evaluating technologies and capabilities most useful to our Soldiers and units. The result of this experimentation effort is to inform a future acquisition process. Major recent accomplishments include: completion of several virtual experiments with units from the operating force to develop the RCV’s contributions to the future fight; successful development and testing of interim M113-based RCV surrogates and control vehicles to enable the live operational experiments; and completion of two significant contract actions for dedicated RCV surrogate prototypes.

Following successful completion of the design, build, and test phases for the initial set of RCV surrogates and control vehicles, the first MUM-T Soldier Operational Experiment at Fort Carson, CO, was temporarily put on hold due to the COVID-19 pandemic. Soldiers from the 4th Infantry Division were well prepared and highly motivated for a successful operation, only to halt following initial system training and orientation. Despite the pause, initial feedback is exceptionally encouraging, reinforcing Soldier understanding and confidence developed during RCV simulated and constructive exercises. We expect operations for this experiment to quickly get back on track once conditions permit.

In preparation for the second MUM-T Soldier Operational Experiment scheduled to take place in 2022, the Army awarded contracts for industry-built RCV (Light) and RCV (Medium) prototype surrogates. QinetiQ is developing RCV(L) surrogates based on their Expeditionary Modular Autonomous Vehicle (EMAV). This system capitalizes on experience gained from recent USMC experiments with a similar platform, but focuses on capabilities specifically developed to support reconnaissance and security roles for Army Brigade Combat Team employment concepts. Textron is developing the RCV(M) surrogate from its M5 Ripsaw prototype. The RCV(M) is designed to enhance the unit’s ability to aggressively maneuver in close contact with the enemy, defeating threats on the contested, highly-lethal peer and near-peer battlefield. Both systems incorporate several key components of US government-provided autonomy, communications and lethality technologies to enable critical capabilities necessary for manned-unmanned employment in close combat.

The RCV program continues to see outstanding partnership between government and industry to develop this potentially transformational capability for the warfighter. If successful, MUM-T with RCVs in ground combat roles will significantly improve the capability of all three of the Army’s ground maneuver formations to expand the operating environment, reduce risk to Soldiers, and enable battlefield commanders to make faster, better-informed decisions.

The MPF program continues the prototype build phase with BAE systems and General Dynamics Land Systems, producing two unique competitive combat vehicles. The respective industry teams will deliver fully capable systems for testing over the next several months leading up to a Soldier Vehicle Assessment (SVA) and Limited User Test (LUT) in early 2021. These events provide the Army a unique opportunity for Soldiers to get hands-on experience with prototype vehicles, inform future program decisions, and enable development of Tactics, Techniques, and Procedures for formation-level employment. The upcoming SVA and LUT will build off of lessons learned from the recently concluded yearlong LAV-25 surrogate MPF excursion in the 82nd Airborne Division, to inform future integration requirements for the Army. Soldier’s perspectives captured and analyzed through the SVA and LUT will play a significant role in determining the best combat platform for the battlefield and how the Army employs MPF-equipped organizations.

Six decades after first fielding the venerable M113 family of vehicles, the Army is on-track to replace this platform in the Army’s ABCTs with the AMPV. Critical tactical enablers in the ABCT will again have comparable mobility, survivability, and reliability with the primary combat vehicle platforms resident in our formations today with growth for the future. The AMPV program continues with initial low-rate production supporting delivery of the first vehicles to the Army scheduled for later this year. The first full BCT fielding is expected to be complete in 2022.

Following last year’s AMPV LUT, the combined CFT and PM AMPV team actioned over 24 separate improvements to the vehicle design taking in user feedback and engineering efforts in record time – fixes immediately integrated into the production line. These improvements will further enhance the combat capability and employment of these systems as the first production models come off the assembly line.

Overall user feedback from the field on the five variants of the AMPV has been overwhelming positive as these vehicles will provide the mobility, survivability, network integration, reliability, and growth that will serve the Army’s ABCTs in the decades to come.

The NGCV CFT continues to drive ground combat platform modernization, prioritizing the Army’s signature efforts that will have the most significant impact on how the Army fights. Experimental Prototyping, Soldier Feedback, industry partnerships, and innovative problem solving are critical to modernization of the Army’s ground vehicle fleet. As stated by the NGCV CFT Director, Brigadier General Ross Coffman, “All our efforts center on the Soldiers and the units who will fight these platforms in the worst conditions, at the worst time, and against a determined enemy. Our job is to do all we can to make sure that fight is not fair.” The NGCV CFT remains mission-focused on leading the ground vehicle modernization enterprise to support a future force that will enable the U.S. Army to defeat our adversaries and decisively win on the future battlefield.