Modernizing for Rapid Integration and Synchronization 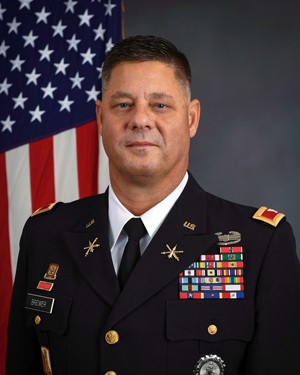 COL Brewer began his military career in the Mississippi Army National Guard in 1990 as a Cannon Crewmember in Alpha Battery, 4/114th Field Artillery. Upon receiving his commission as a Second Lieutenant from the Mississippi Military Academy in 1992, he served as Fire Direction Officer and Forward Observer in Bravo and Charlie Batteries, 4/114th FA. The battalion was reorganized as the 1-204th Air Defense Artillery in 1994 and he served in various duty positions including Platoon Leader, Battery Executive Officer, Battery Commander, Battalion S1, and Battalion S2.

COL Brewer joined the Active Guard and Reserve Program in 2000 as the Training Officer for the 1-204th ADA. Upon his promotion to Major, he was assigned to the 168th Engineer Brigade as Brigade S1. He deployed with the 168th to Afghanistan in 2009 in support of Operation Enduring Freedom as Brigade S4. Upon redeployment, he returned to the 1-204th ADA as Battalion Executive Officer and full-time Administrative Officer. He deployed with the 1-204th ADA to Iraq in 2011 in support of Operation New Dawn as Battalion S3. He was next assigned to the Recruiting and Retention Battalion serving as S3 and Deputy Commander. After serving briefly as the G1 Operations Officer for Joint Force Headquarters, Mississippi, he was promoted to Lieutenant Colonel and assigned to 66th Troop Command where he served as S1 and full-time Chief of Staff. COL Brewer’s last duty assignment with the Mississippi Army National Guard was as Battalion Commander, 1-204th ADA. He currently serves as Chief of Staff for the Air and Missile Defense Cross Functional Team, Army Futures Command.

COL Brewer currently resides in Lawton, Oklahoma and has two children, Jessica, a dental student at University of Mississippi Medical Center and Ethan, a Junior at Mississippi State University.

A&M: Speak to some priority areas that the Air and Missile Defense Cross Functional Team is focusing on to present.

COL Brewer: Since 9/11, the Army has been engaged in a Global War on Terrorism and modernization had taken a back seat. Army leadership realized more emphasis needed to be placed on modernization. With the establishment of Army Futures Command (AFC) and the Cross Functional Teams (CFTs), the Army is rapidly moving in that direction. The Army has six modernization priorities and Air and Missile Defense is in the top five of those priorities. The Air and Missile Defense Cross-Functional Team (AMD CFT) works to reduce or eliminate capability gaps, by rapidly integrating and synchronizing the requirements development process, acquisition process, and resources to deliver Air and Missile Defense capabilities to the warfighter faster. Our CFT is responsible for four programs, also known as Signature Modernization Efforts. We will continue to focus on these four areas, working to create programs to meet the goals of the Army.

Our four programs are:

A&M: With the evolution of counter-missile capabilities, what are some directions of development and fielding you see the CFT taking?

COL Brewer: Overmatch is key when facing an adversarial threat. As technology and tactics evolve, the CFT focuses on modernizing systems to win on future battlefields. There are several on-going Science and Technology (S&T) efforts that AMD CFT, as well as all the CFTs are working on with the Rapid Capabilities and Critical Technologies Office (RCCTO). Some of our primary efforts include Directed Energy (DE) for M-SHORAD and IFPC and Advanced Radar Technologies. Our S&T efforts are primarily focused on improving the future capabilities of the Signature Modernization Efforts in our current portfolio.

A&M: From an Army Modernization strategy perspective, how do you see the evolution of missile defense in addressing future Multi-Domain Operations?

COL Brewer: The Army’s AMD Modernization Strategy provides Combatant Commanders with a flexible, agile, and integrated AMD force capable of executing Multi-Domain Operations (MDO) in support of unified land operations. One of our programs, AIAMD will be one of the Army’s contributions to the Joint All Domain Command and Control System (JADC2). Basically, all services are working together to ensure our systems are integrated and we can operate in a joint environment during Large Scale Combat Operations (LSCO).

A&M: Feel free to talk about other goals/challenges moving forward.

COL Brewer: AMD CFT’s mission is to deliver future Air and Missile Defense capabilities to the warfighter faster, cheaper, and more efficiently than we have in the past. So far, we are accomplishing what we were established to do. Our M-SHORAD program is just one example of some of the great things we’ve accomplished. We’ve taken that program from concept to prototype in only two years, a process that normally took 5-10 years. Our goal is to continue to synchronize efforts across the AMD enterprise to drive capabilities to the warfighter fast. Our four Signature Modernization Efforts are programs that provide critical Air and Missile Defense capabilities that will fill gaps identified by Army Senior Leaders. These capabilities will one day protect our Soldiers on the battlefield from aerial threats. In a nutshell, AMD CFT is equipping soldiers with more modern resources at a faster rate and allowing them to complete their missions with optimal protection from air attack.