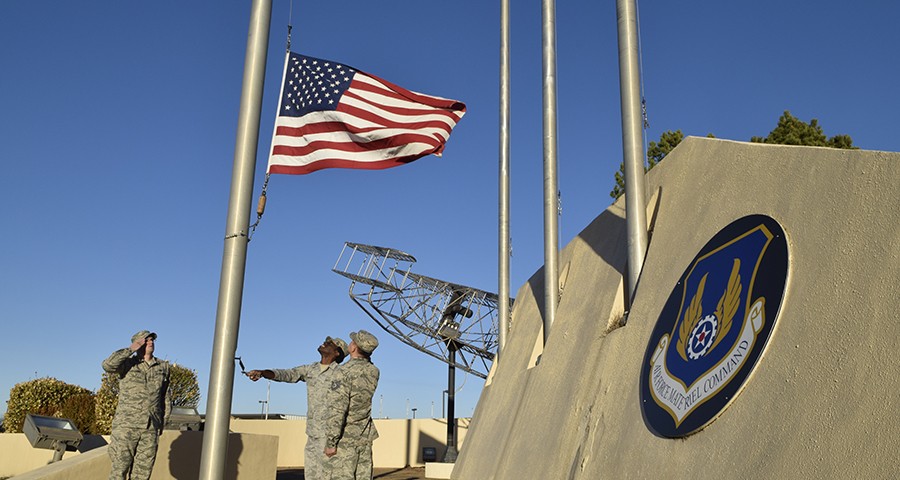 The $243 million facility modernization project will save at least $20 million annually in energy and operational costs over the 25-year life of the contract. This includes the traditional energy conservation measures such as boiler and chiller optimization, lighting retrofits, building envelop upgrades, infrared heating, water and sewer conservation. “When you have a 35 percent savings over 10 million square feet, that is a real, tangible difference,” said DLA Energy Commander Air Force Brig. Gen. Martin Chapin. “The money that is saved in the Department of Defense now goes to do something else we need to do. We can spend it on readiness or whatever else it is we feel the need to do at the time.” The project also addressed the manufacturing processes with conservation measures in the paint booths, thermal spray booths, the plating shops, the industrial waste water treatment plant and the chemical cleaning shops and the compressed air retrofits. “This project covers it all,” said DLA Energy Contracting Officer Cynthia Obermeyer. “It achieves energy conservation, cost savings and improves mission reliability through installation of new equipment and infrastructure.”

After completion of a 42-month construction effort, included as part of the 25-year performance period, the total annual energy savings are projected to be 665 billion British thermal units per year, equivalent to the average annual energy consumption of more than 8,300 homes. In addition to a projected 35-percent reduction in Tinker OC-ALC energy usage, this project provides water efficiencies, with OC-ALC water usage projected to reduce 9 percent. The ESPC was executed within 20 months as a result of proactive planning and execution efforts with stakeholders. “When I read that this happened within about a 20-month period of time … for those who may not be used to government contracting cycles, you may think ‘wow,’ that seems like a long time,” Chapin said. “However, I’ve been around enough government contracts to know that’s actually a very short period of time … and for something of this size to come together in a 20-month period of time, is absolutely phenomenal and it’s a testament to the teamwork.” “This could not have been accomplished without the collaborative effort of the Tinker OC-ALC, the Air Force Civil Engineering Center, DLA Energy and the contractor,” Obermeyer said. “The contractor was very supporting and collaborative. The contractor brought in their best [personnel], who were very cooperative. We all agreed up front that we would make this happen and we all worked around the clock until we did!”

Projected Goal and Beyond

The Air Force exceeded its commitment toward the $4 billion Presidential Performance Contracting Challenge goal with the Tinker OC-ALC ESPC project. Under the challenge, each federal agency was charged with optimizing its energy footprint through the use of third-party performance contracts. “Contracting support obtained from the installation contracting offices has many different types of contracting venues and they do a great job executing the operation and maintenance dollars for the installation, but energy is a beast all unto itself. Our expertise and services are provided to the DoD with a committed work force focused on the energy industry,” Obermeyer said. DLA Energy is currently working on eight Air Force ESPC projects for award this calendar year. Nine more are due to be awarded next year and new requirements are in the pipeline coming from Air Force Civil Engineering Center.