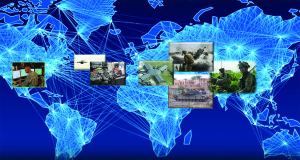 The U.S. Army’s vision for its Mission Command Network is at the core of Training and Doctrine Command (TRADOC) efforts to prepare the Army for future operational success.

Any significant endeavor requires clear direction and purpose to achieve success. Recently, the U.S. Army’s Training and Doctrine Command (TRADOC) published a holistic vision for the Army’s network entitled “The Mission Command Network: Vision & Narrative”. Defining the Mission Command Network as “integrated mission command and network capabilities”, this document provides a holistic vision for operational capabilities looking forward to 2025 and beyond. This vision is nested within the context of the U.S. Army’s Operating Concept: “Win in a Complex World”. The document offers a unified vision and operational view, and offers key terms & ideas for the entire network. It describes characteristics, design principles for modernization, and articulates requirements by echelon and formation (strategic to company level). This vision is the guidepost for the Army’s mission command network modernization strategy.

The highest levels of Army leadership realized we needed a vision for the network from the perspective of the commander. In the summer of 2014, the Chief of Staff of the Army (then General Odierno) asked for an overarching vision and narrative for the entire Army/Joint network, firmly rooted in a mission command perspective, which would allow him to make decisions about network capabilities. He felt at the time that network issues were presented to him without a holistic view of the network. He asked TRADOC to develop a narrative that holistically addressed the network from a mission command perspective. An integrated planning team (IPT) was promptly formed to produce that narrative, along with a comprehensive assessment of the network as it existed at that time.

The IPT was formed under leadership from the U.S. Army’s Capability Integration Center and Combined Arms Center (specifically the Mission Command Center of Excellence), with the mission of assessing the network and producing the requested narrative. Team members included all significant mission command and network stakeholders across the Army staff, the Army’s acquisition community, and TRADOC. The IPT focused on developing a clear vision statement for the Army’s Mission Command Network. After several months of vetting across the Army, the vision statement became “Achieve expeditionary, uninterrupted mission command; through a network comprised of intuitive, secured, standards-based capabilities adapted to commander’s requirements; and integrated into a common operating environment. Network capabilities are assured, interoperable, tailorable, collaborative, identity-based, and accessible at the point of need in operations that include unified action partners.”

The vision statement, key ideas, and design principles were briefed back to General Odierno in December 2014. Further refinement continued, culminating in a brief to General Milley in September of 2015, where he stressed the importance of deployability and tactical mobility. The vision was published with his requested refinements in October 2015.

The network must be understood by its operational role. The primary role of the Mission Command Network is to enable globally responsive joint combined arms teams to maneuver across domains and locations. It enables uninterrupted mission command across home station, enroute, and deployed conditions. It matures within a theater, is immediately available upon initial entry (through satellite), and thickens over time with aerial and terrestrial capabilities. It provides a common user experience across echelons, formations, and phases. Command posts function in consolidated and distributed configurations, are able to deploy quickly, and then scale to the desired capacity. Mission Command Network capabilities are tailored to each commander’s requirements based on echelon and formation, fully considering the unit mission profile and leader/soldier workload, enabling training and unit readiness.

“Our Army’s ability to conduct expeditionary maneuver and Joint Combined Arms Operations depends on a Mission Command Network that is assured, interoperable, tailorable, collaborative, identity-based, and accessible at the point of need,” said LTG H. R. McMaster, Director, Army Capabilities Integration Center (ARCIC). “We must evaluate and prioritize network-related efforts based on the degree to which they contribute to this vision and how network-related capabilities effect our ability to operate consistent with the Army Operating Concept.”

“The goal is to achieve expeditionary, uninterrupted mission command,” said Maj. Gen. Willard Burleson, then Director, Mission Command Center of Excellence (MC CoE). “These network capabilities must be assured, interoperable, tailorable, collaborative, and accessible at the point of need. This enables expeditionary mission command, expeditionary maneuver from multiple locations, and projecting power across all domains.”

We must be prepared for situations where the network is not fully functional. Uninterrupted mission command is the ability to exercise mission command across multiple locations, with continuity of purpose, in spite of discrete breaks in communications. It has two components: (1) a single mobile, protected network which maximizes connectivity and capacity for operations; and (2) leaders and soldiers proficient in leveraging network-delivered capabilities, who are equally able to continue the mission across a range of degraded network conditions.

From Location to Formation

As a holistic document, the Mission Command Network Vision & Narrative seeks to articulate the unique needs of each location, echelon, and formation. In order to do so, it speaks to the enterprise or strategic aspects of the network, to include home station requirements. It then articulates the needs of deployed formations from theater army to company level. For each echelon/formation in question, the document describes (1) operational conditions, (2) critical locations and nodes, (3) essential capabilities, (4) information needed by key leaders in that formation, and (5) communication / collaboration requirements with key subordinates, peers, superiors, enablers, and mission partners. This portion of the Narrative establishes several key attributes that the network needs to enable tactical formations. For example, the network must enable formation and platform agility but fitting with size, weight, and power constraints. Network components must also have equivalent tactical mobility to the formation it enables. There are also special areas of interest such as air ground operations, cyber electromagnetic activities, and operations in disrupted, intermittent, and limited conditions.

Currently the document is serving as the vision for the Army’s Mission Command Network Modernization strategy. This strategy has six endstates which seek to attain the key ideas and capabilities outlined. These endstates are focused to (1) integrate the network across formations, (2) leverage common standards and technologies, (3) simplify and protect the network, (4) attain interoperability with mission partners, (5) create agile, expeditionary command posts, and (6) develop an enterprise network that enables expeditionary mission command, training, and readiness. Each endstate consists of objectives over time that move the Army toward the desired capabilities.