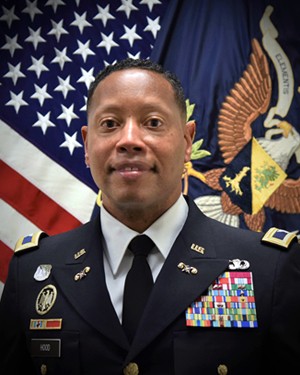 Colonel Daryl Hood received his commission from the University of Georgia (UGA) in December 1991, graduating with a Bachelor of Science Degree in Agriculture Technology Management. He holds a Master of Arts Degree in Human Resources from Webster University and a Master of Strategic Studies from the Air University. His military education includes the U.S. Army Chemical Officer Basic and Advanced Courses, the U.S. Army Combined Arms Services Staff School, the U.S. Army Command and General Staff College, and the U.S. Air Force Air War College.

While at the Pentagon from 2017-2019, Colonel Hood served as the Chief, Full Dimension Protection Division, G8, Headquarters, Department of the Army and dual-hatted as the Deputy Director and Division Chief, Joint Requirements Office for Chemical, Biological, Radiological and Nuclear Defense, J8, Joint Staff.

Colonel Hood’s deployment experience consists of serving as the Chemical Officer for 2d Armored Cavalry Regiment and 1st Armored Division Forward as part of OPERATION JOINT ENDEAVOR, Bosnia-Herzegovina in 1997; Executive Officer of the 23d Chemical Battalion and Task Force Cincinnatus in support of Operation Enduring Freedom (OEF), Afghanistan in 2007; and the J3 USCENTCOM Liaison Officer to ISAF and USFOR-A as part of OEF, Afghanistan in 2010.

CST/CBRNE: Provide some brief background, role, and mission focus for the CBRN School to present.

COL Hood: The Army’s Chemical, Biological, Radiological and Nuclear Regiment is agile and adaptive; a team of over 18,000 strong across all components. CBRN Soldiers are trained and ready operators, experts at providing critical capabilities to enable the Army to fight and win in a complex CBRN environment. We provide the Army with CBRN reconnaissance, CBRN hazard mitigation and CBRN expertise to ensure freedom of action and survivability at home and abroad. The United States Army CBRN School will support the Army in posturing to fight and win in a CBRN environment; we will continue to design, acquire and build the Army’s future CBRN capability and constantly improve it.

CST/CBRNE: From a current day threats preparedness perspective, talk about some current trends in training.

COL Hood: The USACBRNS at Fort Leonard Wood, Missouri, continues to train, educate and develop the best qualified CBRN warriors and civilian specialists for the nation and its international partners. The USACBRNS is in the initial phases of constructing a large-scale production training venue that will replicate peer/near-peer threat CBRN facilities. Exposing our Soldiers to industrial-sized, state-sponsored Weapons of Mass Destruction (WMD) infrastructure will be critical to preparing them to support large-scale ground combat operations (LSCO).

Additionally, we recently renovated our Chemical Defense Training Facility (CDTF) to include training scenarios that support LSCO portrayed in globally relevant areas of operation uniquely tailored to CBRN Defense and Counter WMD missions. These scenarios provide live-agent toxic training to meet Army training objectives. We are able to host training for the institutional, operational, joint and international communities requiring integration of chemical warfare agents, toxic industrial chemicals/materials and precursors to meet future challenges in an uncertain and complex strategic environment. Finally, we are identifying scenarios that can be replicated in virtual, constructive and interactive (VCI) gaming using augmented/virtual reality platforms and other synthetic training environments to maximize task repetition in expected operating environments.

CST/CBRNE: In terms of chem-bio attack readiness, what are some areas of focus in fielding CBRN-skilled personnel?

COL Hood: Our near-term goals include a force design update which will establish the groundwork for a component restructuring and equipment transition to provide a fixed site terrain decon capability in Component (COMPO) 1 and Army prepositioned stocks in order to maintain access to our sea and air ports of debarkation in the opening hours and days of a campaign. Our long-term goals include building an organic crew-level mitigation capability and procedures that allow first-line leaders to assess and mitigate contamination at the lowest level, focused on reducing risk to their squads and crews without reliance on CBRN enablers. For the CBRN enablers, the focus is on developing automated and waterless mitigation capabilities to reduce the logistical burden and increase responsiveness of our CBRN units. This includes autonomous/semi-autonomous mitigation capability to expeditiously reduce contamination on fixed sites and key terrain to ensure freedom of movement.

CST/CBRNE: From a rad nuke perspective, how are current threats being covered in readiness training?

CST/CBRNE: With field lessons learned, what are some ways the CBRN School is partnering with industry to ensure capabilities are better targeted to threats?

COL Hood: The CBRN Regiment is developing new training with industry opportunities for Chemical officers, warrant officers and noncommissioned officers. We also invite our partners in industry every year during our regimental week to share the wide range of equipment designed to support Soldiers operating in a complex CBRN environment

CST/CBRNE: Feel free to speak to other goals and challenges moving forward.

COL Hood: As we focus on winning against near-peer threats in a CBRN environment, we are changing the paradigm of CBRN operations, providing decision space for commanders, protecting the force through leadership, materiel and non-materiel solutions, and enabling movement and maneuver to retain freedom of action in order to fight and win on future battlefields. At the forefront of our materiel efforts is the NBCRV sensor suite upgrade. This upgrade improves on every sensor, increases operational-readiness rates and significantly increases the standoff range by not only improving currently existing sensors, but also integrating unmanned aircraft systems and unmanned ground vehicle (UGV) capabilities onto the platform.

Under contamination mitigation, through several recent experiments and exercises, we have established that we must integrate and leverage advancements in assessment and protection to modernize contamination mitigation. I have signed the Interdependent Contamination Mitigation White Paper that is serving as the conceptual framework to help guide modernization of this capability and establishes three objectives: gain real-time understanding, establish inherent protection and negate hazard effects. Bottom line, there are bad actors who will continue to challenge us with new capabilities and ever more dangerous threats. To counter this, we must be proactive, not reactive, and always remain at the leading edge of modernization and technology. Our nation and our service members are counting on the USACBRNS and CBRN Soldiers to always bring their best to defend the homeland and win against any threat.