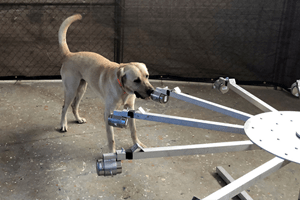 The U.S. Army and University of Pennsylvania team up to train virus-detecting dogs.

The U.S. Army and the University of Pennsylvania have entered into a cooperative research and development agreement (CRADA) to explore the ability of dogs to safely detect biomarkers produced by the COVID-19 virus in humans. Medical researchers at the University of Pennsylvania School of Veterinary Medicine (Penn Vet) Working Dog Center have trained dogs to detect ovarian cancer and diabetes. Could using dogs to detect COVID-19 in humans be far behind?

That was the question that motivated researchers from the Combat Capabilities Development Command (CCDC) Chemical Biological Center.

“We had just begun teleworking at the Center,” said Michele Maughan, Ph.D., a Center researcher. “And I called up the research partner in my branch who I work most closely with on dogs, Jenna Gadberry, and said to her, ‘We keep saying we need to find a way for dogs to detect COVID-19, let’s do this! Do you have the will to try?’” With a collaborative yes, they approached their branch chief.

The Biochemistry Branch Chief, Patricia Buckley, Ph.D., gave them the green light to get started. “I liked the idea immediately,” said Buckley. “And since my branch had already developed the Training Aid Delivery Device, we call TADD, I knew the training could be done in a way that would be safe for the dogs and handlers.”

The TADD was first developed by a Center research team in 2013 as a laboratory device for containing hazardous substances needed for testing and evaluation of new detection equipment. In 2018 it was ruggedized so that it could be used in field settings without fear of breaking it if it was dropped or roughly handled. It is a container that comes in sizes ranging from one ounce to eight ounces. A membrane covering the mouth of the container lets the volatile organic compounds (VOCs) that a hazardous substance emits flow out of the TADD. The hazardous substance itself remains inside. A grid placed over the membrane prevents punctures.

“The TADD made it safe for dogs to be trained using live substances because explosive powders and narcotics stay under the membrane and do not go up into a dog’s nose,” said Maughan.

“In the case of detecting COVID-19, the dogs never actually have any exposure to the live virus. Rather, they are trained to detect the biomarkers associated with COVID-19 disease in humans. These biomarkers are the proteins that the human immune system produces in response to the presence of the virus and not the actual virus. The goal is to train dogs to detect the disease state before a person starts showing signs of disease such as fever, coughing, and shortness of breath,” Maughan added.

Another feature of the TADD is that all of its components, from the tight-sealing lid to the protective grid emit very little odor. “Plastic and rubber materials can be very stinky to dogs and interfere with their detection of the substances we’re looking for,” said Maughan. “We knew the TADD would be perfect for containing COVID-19 patient samples of saliva or urine because we knew this odor profile would be quite nuanced and require the dogs to key in on some really low VOC molecules. It’s important that the containment system, the TADD, doesn’t compete with the target odor.”

The TADD development project was a part of the support Center researchers had been providing the military explosives community’s canine detection programs since 2012. Over the course of that work Maughan and Gadberry had developed strong connections with the military working dog community, both within government agencies and with some of the nation’s most gifted dog trainers who work as independent contractors.

Maughan had another important connection, too. As an undergraduate pre-veterinarian student at the University of Delaware she had gotten to know the director of Penn Vet’s Working Dog Center Cynthia Otto, DVM, Ph.D. “The working dog community is small and I had stayed in touch with Cindy over the years because we are both very interested in how to use dogs to improve people’s lives,” said Maughan. “So, when the COVID-19 pandemic first began, the idea of approaching her on training dogs to detect the virus in humans was a natural.”

Just like Buckley, Otto liked the idea immediately. In fact, the Penn Vet Working Dog Center had a one to two-year canine COVID-19 project in mind already. What Maughan and Gadberry brought to this effort is what the U.S. Army does best – up the tempo and get a hard job done fast. Maughan and Gadberry were perfect for this. In addition to their relationship with Otto and the Working Dog Center, through the Center they had developed relationships with military users, the virus research community, and a host of other government agencies.

Given the green light, Buckley, Maughan, and Gadberry put the project on a fast track. Maughan called Otto on March 27. Within ten days the Center team and the Penn Vet team were holding project planning discussions. On April 28, the teams were notified that the University of Pennsylvania had found a philanthropic gift to fund the project. On May 14, the Center established a cooperative research and development agreement (CRADA) with the University of Pennsylvania to perform cooperative research. By May 21 all of the COVID-19 human samples had been collected, and the dogs began training on May 26.

To perform this highly specialized training, Maughan and Gadberry reached out to another dog trainer they had stayed in contact with over the years, Patrick Nolan, owner of a working dog business in Hagerstown, Md. He started his business after 12 years of working with U.S. Army Special Forces training military working dogs and 30 years of training retrievers to hunt.

“Pat provided ten working dogs and, using human saliva and urine samples provided by the University of Pennsylvania, got the dogs working with the TADDs right away,” said Maughan. “Training dogs to do this kind of work, detecting a substance down to the parts per trillion level is an art, and I could think of no one better than him to do it.”
What the dogs are actually identifying is not the virus itself, but the proteins that the human immune system generates to fight the virus. The art that a trainer like Nolan applies is to get the dog to pay attention only to that smell, and to stay engaged in the hunt for it for hours at a time.

The training wheel is central to that training process. It has multiple arms; each one has a TADD attached at the end of it. Some contain saliva or urine from a symptomatic COVID-19 patient, some contain an asymptomatic person’s sample, and some are from a person who does not have the virus. But the choices do not end there. Some contain an inert substance as a control, some have a distraction element inside such as an open magic marker or food item or a tennis ball, and some are empty.

The dog is, in effect, paid to become increasingly selective, honing its attention down to just the COVID-19 immune response odor. For these Labrador retrievers, payment is a food treat or a favorite toy. As the training progresses, Nolan stacks the wheels making for even more sources of stimulation for the dogs and demanding that they become more and more selective.

This is a six to nine-week process and not every dog makes it through. “Not every dog can stick with the length and degree of intensity of the training to get all the way to being able to detect in the part per trillion range,” said Gadberry. “And not every dog has the drive to stay with the game for hours at a time, which is essential if the dogs are to provide COVID-19 screening at the entrances to crowded public places such as at airports, sports stadiums, or at border control checkpoints.”

Those dogs that make it all the way through the training to eventually be operationalized are far better at getting the job done than swabs used for later analysis, or thermal cameras currently being used to detect a fever. Their method of detection is immediate and can detect COVID-19 in people who have not become feverish yet.

However, getting to that next step, creating a cadre of trained dogs ready to be deployed, is not part of the scope of this study. “We only received enough funding, through the University of Pennsylvania to establish the proof of concept,” said Buckley. “When the money runs out in the summer of 2020, we will write a report on our findings with Pat Nolan and Cindy Otto, and then have to seek out further funding.”

Everyone involved in the project fervently hopes for further funding. They see the potential benefits of virus-detecting dogs as a routine presence at public gatherings as simply too promising to not pursue further. “This is even bigger than the pandemic we are dealing with now,” said Buckley. “We will face future pandemics from other viruses and having a capability like this will keep the nation ready for whatever happens next.”