Maintenance Check or Reality Check: The Choice Is Yours 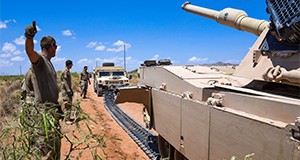 Although preventive maintenance checks and services, routine maintenance, and diagnostics may seem trivial and easy to skip, failing to perform them — and to do so correctly — can have dire, costly, and possibly even fatal consequences.

When preventive maintenance checks and services (PMCS), routine maintenance, and onboard diagnostics are woven together, they provide a holistic approach to maintenance readiness. Each facet is important, and discounting or ignoring them can have very negative and costly results.

What really should be included in the abbreviation PMCS is the word scheduled. All of our equipment is going to need to be serviced and repaired; however, rather than waiting for a failure, we schedule the maintenance action using PMCS. This enables us to dictate the time and the place for the maintenance. How many times have you been forced to perform maintenance in adverse conditions like mud, snow or sand? PMCS is designed to minimize those instances.

High operating tempo and low manning levels make PMCS an ongoing challenge during training and deployments. Harsh environmental conditions spur high demand for repair parts for certain vehicles. Mileage on vehicles driven one month in Iraq may exceed that for a similar vehicle driven one year elsewhere. The extra weight of reactive armor and the high operating tempo in the area of operations will cause frequent failures. All of these factors make PMCS and proper scheduled maintenance highly important. To ensure equipment readiness, maintainers must enforce unit standing operating procedures and be vigilant of developing trends. Too often, leaders treat PMCS and stringent dispatch procedures as a garrison/peacetime endeavor. However, I can personally say that during my Operation Iraqi Freedom rotation in 2004-05, we maintained a rigorous program that resulted in nearly zero recovery missions due to mechanical failures. We had our share of improvised explosive device battle damage recovery missions, but zero for preventable occurrences.

Now let’s imagine an instance involving a failure to correctly perform a crew-level PMCS task for the Abrams tank. The after-operations PMCS check requires adjusting track tension. During this adjustment task, the tank driver moves the tank forward prior to adjustment. The correct procedure when doing this is to coast to a stop. Imagine, however, that your driver has developed a bad habit of using the brakes rather than coasting to a stop. Applying the brakes rather than coasting causes uneven tension in the track, resulting in reduced tension near the front of the track. During the tension adjustment, this slack is removed, but it results in the track actually being too tight, causing stress on all its components. A few weeks pass and you begin to notice that the end connectors are developing a groove pattern and your sprockets begin to show signs of cupping (having a curved ridge instead of a smooth surface).

That minor error just cost the crew hours of backbreaking maintenance. You will now have to replace numerous end connectors and reverse or replace both of the drive sprockets. Additionally, you’ve quickly reduced the overall life of not only the end connectors and sprockets but also the internal bushings. (Bushings help keep the tracks in alignment, so wearing them down can result in thrown track from tracks becoming too loose or coming off.) That is a quick escalation from a simple five-minute PMCS check to costing thousands of dollars and numerous man-hours in labor to replace the track before its expected life.

The impact doesn’t stop there; the effects are potentially more far-reaching than a single Abrams tank. At the national level, the item manager has not forecasted for this premature failure. Similar behavior across the fleet is driving a spike in demand. Now there may not be enough stock on hand when needed.

With regard to monthly PMCS, leaders frequently preach, “Make sure you do your before, during, and after PMCS,” but what about those weekly or monthly checks — aren’t they important? Once again, let’s look at the Abrams tank. Monthly PMCS item #1 is for the engine exhaust seal. That seems simple enough; however, the grill doors are heavy and a pain to open. The crew says, “We can probably skip this” and moves on.
Fast-forward in time. While maneuvering on a miserable, dark, rainy night, suddenly a message alerts you that there is a fire in the engine compartment. The driver is already engaging the 2nd shot fire bottle (a fire extinguisher used manually when the automatic fire suppression system does not extinguish the fire completely), and you quickly execute a crew evacuation of the vehicle. You’re now out of the fight, smoke is smoldering from the engine compartment, and everyone is speculating about the cause and the extent of damage.

The next morning at first light, safety and fire personnel and leadership are also very interested in why the alert came on in your Abrams tank. Opening the rear grill doors, you notice they weren’t exactly secure. Swinging the doors open, we see the exhaust gasket is in really bad condition. It shows signs of wear and damage that are well beyond the criteria in the Technical Manual. Maintenance pulls the power pack, and this time you’re fortunate: It’s only the generator and a wiring harness that have sustained fire damage. Even on the cheap side, neglecting to perform that simple monthly check cost your unit about $25,000. This time you got lucky, but next time it could also include the loss of the entire power pack in your Abrams. That’s a potential cost to your unit of approximately $750,000.

Routine Maintenance: Anything but Routine

Regarding routine maintenance, this is where we take a holistic approach to maintaining our equipment. It entails field-level mechanics performing the semi-annual, annual, and biennial services as well as after-operations maintenance practices. These maintenance operations demand as much leadership involvement as the crew-level PMCS.

When I was the warrant officer stationed at Fort Riley, KS, back in 2002, our battalion had the oldest fleet of M1A1 tanks. Maintaining them was a challenge, so much so that we frequently missed the Army’s standard of 90 percent operational rate. We were scheduled to deploy our Abrams to the National Training Center for an early spring force-on-force rotation. Needless to say, many were concerned about how our fleet would perform, especially since the previous rotation experienced five engine fires.

Undaunted, my battalion executive officer (XO) developed a predeployment service to ensure our success. This entailed pulling 100 percent of the power packs, steam-cleaning the hulls, and inspecting the power pack to ensure all of the wiring harnesses and generator connections were a mirror image of those published in the Technical Manual. Furthermore, prior to installing the power pack, the battalion commander, the battalion XO or I had to conduct a quality assurance inspection.

This was a bit draconian, but it directly resulted in an extremely successful National Training Center rotation. The tank companies all crossed the line of departure for every battle with 90 percent and greater combat power, and we experienced zero engine fires. Was our equipment any better than previous task forces? No, we simply implemented rigorous maintenance standards that enabled us to achieve a tremendous maintenance program when provided the required Class IX repair parts.

Diagnostics: Caring About the Code

We’ve come a long way in diagnostics since the Abrams was fielded back in the 1980s. Troubleshooting once required the maintainers to carry seven boxes of test equipment that consumed valuable space in their maintenance vans. Today, the same test capability is performed by the vehicle itself. Although the system is automatic, it still requires interaction with the crew. Failure to complete the entire built-in diagnostics and fault isolation process can lead to catastrophic results.

Let’s explore the conditions that would eventually result in a main nuclear, biological, chemical (NBC) filter fire, with the driver in the hospital fighting for his very life. Semiannual service had just been completed for the Abrams tank. Shortly after starting field maneuvers, the vehicle self-test triggers a Cable Disconnect Warning message. The crew investigates and believes it is an erroneous message, as all systems appear to be fully operational. Maintenance instructs the tank commander (TC) to perform the built-in Fault Isolation Test (FIT), and the TC reports back that he has a TP(test procedure) 438 code. Maintenance dismisses the code as the connector is underneath the bolt-on armor, well secured inside the main NBC compartment, and they’re positive the cable is connected. A function test of the NBC system convinces everyone the TP message is a false positive. In fact, the crew is instructed to ignore future TP438 messages. The crew continues operations, repeatedly dismissing the TP message.

Then one day during gunnery, while operating the main NBC system, the driver notices a sudden rise in the temperature of the NBC air flow. Before he can further communicate, he is quickly overcome by the toxic hot gases from the charcoal filters that are on fire. The TC immediately responds, the crew conducts evacuation, and while outside the vehicle they realize the driver is still inside. The crew is yelling the driver’s name, unaware he is unconscious. Smoke has filled the crew compartment. Miraculously, the crew is able to extract the driver; however, the endeavor to rescue the driver results in other crew members sustaining severe burns and carbon monoxide poisoning.

The accident investigation team determines the results of the fire were directly caused by a failed mechanical component of the main NBC system. It is further determined the warning system and auto shutdown failed due to a disconnected cable — the very one that had been reported to the crew and maintenance via TP438. This further illustrates the importance of fully investigating diagnostic results.

In summary, maintaining Army combat equipment is vital and requires direct involvement by leaders at all levels. All aspects of PMCS, routine maintenance and diagnostics combined and executed to standard will provide the maneuver commander maximum combat power to engage and destroy the opposition. Leaders are most effective when they are visible. I would challenge leaders to join me in my effort to get out from behind the desk and spend as much time as possible with the troops that are actively engaged in executing the multi-echelon maintenance requirements. Those young Soldiers and junior officers are the future of our Army. We owe them our active involvement and mentorship.