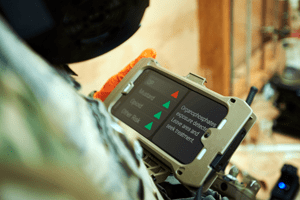 The U.S. Defense Threat Reduction Agency (DTRA) is working to deliver early integrated warnings for chemical exposure on the battlefield.

A wise person once wrote that necessity is the mother of invention, and stories of inventions teach us that the process of developing a prototype relies, in part or entirely, on collaboration. In keeping with this tradition, the Defense Threat Reduction Agency’s Chemical and Biological Technologies Department (DTRA CB), in its role as the Joint Science and Technology Office (JSTO) for Chemical and Biological Defense, collaborated with the California-based company PercuSense to develop a tool that proactively monitors a warfighter’s health for exposure to chemical warfare agents. The collaboration launched the Detecting Indicators of Chemical Exposure (DICE) project in February 2020.

U.S. warfighters are often deployed to locations where potential exposure to chemical warfare agents is possible. Moreover, the use of toxic industrial chemicals as terror or warfare agents is also a concern. In 1994, The U.S. Congress established the Chemical and Biological Defense Program (CBDP) to consolidate the development and delivery of capabilities that mitigate the effects of chemical and biological hazards to the warfighter. CBDP is responsible for conducting research and development efforts to deliver capabilities and products that allow the warfighter to maintain combat readiness in a chemical- and biological-contested environment. DTRA is an integral part of the CBDP and was established in 1998 as a result of the Defense Reform Initiative. DTRA has a unique role in the Department of Defense’s efforts regarding countering weapons of mass destruction (CWMD) and supports a broad range of activities across the CWMD mission, one of which is managing and integrating science and technology programs in chemical and biological defense, under the oversight of the Assistant Secretary of Defense for Nuclear, Chemical, and Biological Defense Programs (ASD-NCB).

The CBDP and DTRA missions are more than simply complementary — they are intertwined. The DTRA mission to counter and deter weapons of mass destruction and improvised threat networks, and the CBDP responsibility to develop and acquire a family of integrated and interoperable chemical, biological, radiological defense capabilities that enable CWMD missions and enable military forces to operate successfully in chemical, biological, radiological, and nuclear environments require the close and integrated relationship that currently exists. To this end, DTRA manages the Joint Science and Technology Office for Chemical and Biological Defense, which executes the CBDP’s science and technology activities.

Through the DICE project, DTRA-JSTO is leading development of a health-monitoring capability that rapidly recognizes exposure to a chemical warfare agent in order to improve short-term risk management and reduce long-term physiological impact. Chemical agents can be in a liquid, vapor, or solid state and may include compounds that are manufactured in a laboratory (for example, some pesticides) or that occur naturally in the environment (for example, arsenic). The effects of exposure to a chemical agent can manifest either immediately or over time, depending on the chemical, its quantity, and the route of exposure (skin contact, inhalation). Physiological effects include symptoms that range from eye or nasal irritation to difficulty breathing and altered mental state. For example, chemical nerve agents, such as sarin and VX, may act rapidly upon exposure and cause symptoms ranging from headaches and runny noses to seizures and respiratory distress. However, symptoms of mustard gas may appear 2–24 hours after exposure with blisters, sore throat, dry cough, or diarrhea. To better assure the health of warfighters on the battlefield, it is critical to proactively monitor their vital signs and relevant biomarkers to quickly care for individuals exposed to chemical agents.

The DICE project will produce a capability that supports the implementation of an integrated, early warning system by bringing together currently disconnected and disparate battlefield components: monitoring a warfighter’s health and the chemical toxicity of a battlefield’s environment. The new capability will monitor electrochemical and physiological markers indicating exposure to a chemical agent and provide real-time feedback to users on chemical changes occurring in their bodies — and alert them of impending danger. “Developing this chemical sensor is an example of the work DTRA and the Chemical and Biological Defense Program routinely engages in to better protect warfighters,” says Dr. Richard Schoske, Chief of the Detection and Diagnostics Division within DTRA-JSTO. “DICE project is also an example of a government-industry initiative that enables swift innovation and propels the Department of Defense forward in its effort to reform its business practices for greater performance and affordability.”

The new sensor and its instrumentation will also be compliant with a digital, geospatial mapping application that warfighters can access: the Android Team Awareness Kit (ATAK). ATAK helps warfighters self-identify where they are on the ground so that they can communicate their movements to each other. For example, the software successfully helped coordinate the relief efforts following Hurricane Florence in 2018. ATAK can guide warfighters to safety from a release of chemical and biological agents and radiological and nuclear threats. The chemical sensor’s compliance with ATAK will also enable the communication of a warfighter in physiological distress.

The chemical sensor will adapt features of its commercial, off-the-shelf device to create a new, relevant tool that operates across the spectrum of potential use cases. The chemical sensor will be minimally invasive and attach to the wearer’s skin, likely on the upper arm. The sensor will monitor and measure the levels of multiple chemical components, or analytes, in the warfighter’s body. Multiple electrodes in the sensor will detect the analytes for exposure to one of these agents: opioid, organophosphate, and mustard. The sensor is akin to a check-engine light in a car, alerting the warfighter of an exposure to a chemical agent and the need for medical evaluation and care. An off-the-shelf vital-sign monitor will be paired with the chemical sensor, and a custom application and algorithm will calculate electrochemical and vital sign data into a risk score that will be displayed through an application on a smartwatch. The higher the risk score, the greater the likelihood that the warfighter was exposed to a toxic chemical.

In short order, the DICE project will have produced and evaluated the feasibility of the new chemical sensor and gathered preliminary data on the sensor’s performance to continuously monitor exposure to chemical warfare agents of interest, and the prototype of the new sensor will be compliant with established specifications. The new, wearable technology that also works with ATAK promises to provide a capability with the necessary decision-support data to keep users safe, healthy, and better able to complete their mission.