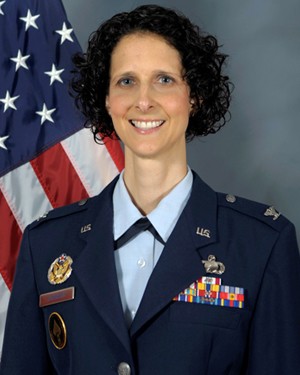 Col. Melissa A. Johnson is the Program Executive Officer (PEO) for Fixed Wing Programs at U.S. Special Operations Command (USSOCOM) headquarters in Tampa, Florida. She is responsible for developing, producing, testing, modifying, fielding, and supporting Special Operations Forces (SOF)-unique fixed wing aircraft and sub-systems, equating to more than100 programs and projects worth $1.7 billion in 2017. SOF aviation capabilities include AC-130 and MC-130 variants, MQ-1C, MQ-9, CV-22, U-28, MC-12, C-145, C-146, other remotely piloted vehicles and precision guided munitions. Prior to her current assignment in Tampa, Col. Johnson was the Chief of Integration for the Ground Based Strategic Deterrent program at Hill AFB, where she was responsible for all programmatic integration of the $85B recapitalization of the land-based portion of the nuclear triad.

Col. Johnson received her commission from the United States Air Force Officer Training School in March 1996. She has served as an aerodynamic propulsion analyst at the National Air Intelligence Center where she developed new modeling tools for missile propulsion assessments. While assigned to the 28th Test Squadron, she was a special projects engineer and program manager for classified electronic warfare and command and control test activities. Col. Johnson also served at the Air Force Research Laboratory’s Directed Energy Directorate as the Engineering Test Director and High Power Microwave (HPM) Applications Program Manager. During her assignment at the Air Force Rapid Capabilities Office, she served as the Chief of the Offensive Capabilities Branch, where she was responsible for integrating acquisition efforts in support of multiple classified programs valued at over $600M.

Armor & Mobility had the opportunity to speak with Col. Melissa Johnson, PEO Fixed Wing Programs, USSOCOM, regarding efforts to sustain and field critical capabilities essential to SOF operator airborne combat and intelligence, surveillance, and reconnaissance (ISR) proficiency in 2020 and beyond.

A&M: Provide a general overview of SOCOM’s fixed wing priorities looking ahead in 2020.

Col. Johnson: PEO Fixed Wing (PEO-FW) remains focused on fielding airborne intelligence, surveillance, and reconnaissance, strike, and mobility capabilities to our Special Operations Forces warfighters. Looking ahead in 2020, our key priorities are accelerating secure/resilient capabilities to the field to meet current & future fight; improving overall adaptability and affordability throughout system lifecycle; and aggressively identifying, leveraging, demonstrating and implementing new technology. Critical capability challenges include the need for advanced defensive systems, the ability to fight through GPS-degraded environments, and advanced weapon systems that reduce collateral damage. PEO FW is committed to these acquisition challenges as we continue to support SOF worldwide.

A&M: In terms of warhead focus areas such as explosive yield and shaping, talk to current goals.

Col. Johnson: Our current warhead development focus includes both yield and shaping while developing acquisition approaches to reduce cost. The goal of our munition development is to continue to ensure a one-shot, one-kill environment with minimal collateral damage. In order to accomplish this, USSOCOM continues to work technology solutions that enable selectable yields during different stages of the engagement scenario along with selectable effects such as articulating warheads that shape blast patterns to control fragmentation. Although these are not new solutions, the application and integration into different munitions such as the Small Glide Munition, Griffin, and Hellfire variants present our SOF with increased weapons selection and engagement flexibility. A critical piece of selectable effects munitions includes data-linking to control and maintain communications with the munition throughout the entire engagement from target coordinate designation through impact.

A&M: From a GPS-denied perspective, what are some areas of focus in near term?

Col. Johnson: Operating through GPS-degraded environments will likely continue to be a challenge for navigation and weapons release. To overcome this challenge, we are leveraging several different approaches, such as advanced antennas and beam steering technology. In addition, we are researching several other technologies such as image-based navigation and land-marking known electromagnetic emissions from the earth to use as calibration points.

Col. Johnson: There is definitely a demand for increased data-linking as we look to build interoperability between coalition partners, increase the engagement effectiveness of munitions, and continue to develop the concept of swarming technologies for both kinetic and non-kinetic effects. As stated earlier, data-linking is a critical piece of selectable effects munitions to control and maintain communications throughout the entire engagement.

A&M: In terms of laser capabilities, talk about potential for semi-active integration.

Col. Johnson: The integration of semi-active laser (SAL) technology into our aircraft and munitions is just another way for us to address GPS challenges while ensuring our munitions retain a one-shot, one-kill capability against the most challenging targets. We will continue to develop and integrate SAL technologies in our suite of munitions ranging from the Griffin and Small Glide Munitions all the way through our Small Diameter Bombs and Hellfire variants.