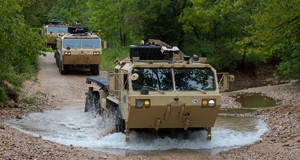 The U.S. Army has a long history of sustainment that supports the warfighter, as moving supplies to Soldiers in the fight is of critical importance. The Army has replaced pack mules with motorized vehicles and could, in the not-so-distant future, replace the current trucks with robotic platforms. The Army has no plans to replace Soldiers with robots, but to supplement their missions with increased capability. Here at the Combat Capabilities Development Command (CCDC) Ground Vehicle Systems Center (GVSC), Warren, MI, we have been supporting the Warfighter and providing them with unmanned ground systems since the 1950s. Most of those systems were primarily focused on the combat mission. In the 1990s, when advanced driver assist systems (ADAS) started appearing in the commercial automotive market followed by the trucking industry, GVSC started to adapt those lower cost automotive sensors to the tactical wheeled vehicle (TWV) fleet. The first focus was to increase safety for the vehicle occupants and then to remove the Soldiers from the systems themselves. This mission became increasingly important after 9/11 when convoys started to come under attack from improvised explosive devices (IEDs). The Army started putting Soldiers in Mine Resistant Ambush Protected (MRAP) vehicles to provide protection, which included such innovations as the double-V hulls that were developed here at GVSC. Robotic vehicles enable the Soldiers to remain in the up-armored platforms while escorting the convoys instead of in the less protected vehicles, creating a safer environment for the Soldier.

Currently, the Army is not purchasing new robotic systems to perform the convoy sustainment mission, but looking to upgrade its current TWV fleet with a kit-based approach to equipping the vehicles. First comes the installation of a by-wire kit, which enables electronic control of the base platform and provides active safety systems commonly found in many passenger cars today. Then, an autonomy kit gives the vehicle robotic or unmanned capability. The third and final piece to the system is the Warfighter Machine Interface (WMI) kit, which is added to monitor or control the optionally-manned platforms. The by-wire kit has two modes: Driver Warning (DW) Mode and Driver Assist (DA) Mode. In Driver Warning Mode, audible and visual warnings are sent to the driver with the intent to increase reaction times to avoid potentially dangerous road conditions and possible hazards such as pedestrians and other vehicles. In Driver Assist Mode, braking and steering actuation is provided to assist the driver; the braking and steering actuation provides improved reaction time in avoiding dangerous road conditions and hazards that a driver may encounter. The autonomy kit has three modes. Teleoperation (TO) Mode provides the capability for personnel to remotely and wirelessly control the actuation of another optionally manned vehicle. Teleoperation mode provides sensing to a remote station, allowing the operator to control the remote vehicle without a line of sight. Waypoint (WP) Mode provides the capability for an optionally-manned vehicle to follow a path of pre-defined GPS waypoints. Leader Follower (L/F) Mode provides the capability for an optionally-manned vehicle to lead other autonomous follower vehicles, and/or to become an autonomous follower behind another optionally-manned vehicle. These modes could be used heterogeneously, that is to say, the lead vehicle could be driven in any of the modes. The WMI kit allows for direct control of the vehicle that it is in or another vehicle via communications link. The link could be a short-range radio link or a long-range satellite. Using the long-range satellites, as part of GVSC’s TORVICE (Trusted Operation of a Robotic Vehicle in a Contested Environment) project, robots are routinely driven in Australia from the Detroit Arsenal in Warren, MI.

Maintaining “Person in the Loop”

GVSC does not consider its systems to be autonomous, but refers to them as semi-autonomous. GVSC took the approach to eliminate the hardest problems robots have, perceiving the world and navigating through it simply by having humans do this. Even humans still do not perform these tasks with 100% accuracy. Most drivers can attest to this if they have ever been stuck off road or have had a fender bender. The lead vehicle is always controlled directly using Drive Warning or Driver Assist, indirectly with tele-operation, or semi-autonomously with Waypoint Navigation. With Leader Follower, the human operator has already done the hard work of proving the path, allowing for the follower to have a simpler solution to calculate. The followers are given some autonomy if obstacles get in the way, if small adjustments are needed to correct the path, or if the environment has changed, but the followers still have defined rules they must follow. The technology has been previously tested with up to nine followers, but theoretically could have a much higher number of follower vehicles.

GVSC’s robotic challenges are the same challenges the industry faces: edge cases, events the robots were not programmed to handle. Robots are very good at doing tasks, but as soon as you ask a robot to do a task it was not programmed to do, it will most likely fail. Where humans are very capable of adapting to change and normally have enough experience to deal with that change, robots are not. Commercial industry has the luxury of working in more defined environments, structured road networks (road markings, a priori data, etc.), network connectivity (5G, GPS, etc.), traffic laws, etc. For Army applications, none of the rules can be assumed. A road in place yesterday could have just been cut in, or a road that was there yesterday is now destroyed; enemies actively jam the network, or capture and send felonious data in its place; rules of engagement always change; etc. These military specific problems make this space increasingly harder to solve.

The first issue of this technology to Soldiers will happen as soon as the first thirty systems are handed off to the 41st Transportation Company at Fort Polk, Louisiana, in September 2019 and the next thirty systems will be issued to the 15th Transportation Company at Fort Sill, Oklahoma, in January 2020. For these trucks, Soldiers will have access to four modes (DW, DA, TO, and L/F) and Leader Follower will be limited to one lead vehicle followed by up to three unmanned followers. These four-vehicle marching units will be inserted into large convoys with security vehicles and recovery assets. The Soldiers will be using the optionally-manned vehicles to perform normal missions allowing two Soldiers to operate four vehicles instead of the currently required eight Soldiers to perform these normal operations. GVSC aims to demonstrate that the technology will increase through-put of cargo while increasing Soldier safety.