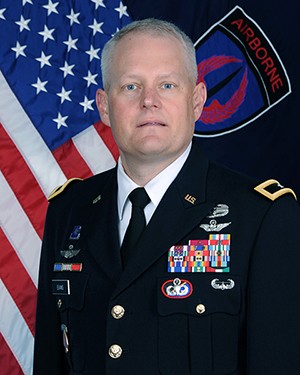 BG John R. Evans, Jr. received his Army commission in 1988 as a Distinguished Military Graduate from Appalachian State University in Boone, NC. After attendance at the Aviation Officer Basic Course, he was assigned as an Apache Platoon Leader in C/1-82nd Aviation Battalion, 82nd Airborne Division, Ft Bragg, NC. BG Evans served as an Attack Platoon Leader in Desert Shield/Desert Storm from August 1990 to April 1991. Upon his return, he served as an Assistant S-3 in 1-82nd Aviation Battalion and Regimental Aviation Liaison Officer to the 504th Parachute Infantry Regiment. BG Evans commanded B Co, 3-229th Attack Helicopter Battalion at Ft Bragg, NC from May 1993 to May 1995. He assessed and was assigned to 1/160th Special Operations Aviation Regiment (SOAR) in 1995 and served as the Battalion Flight Ops Officer, A Co Assault Platoon Leader and A Co Ops Officer. After completion of the Command and General Staff College at Ft Leavenworth, KS, he returned to the 160th to assume command of A Co, 1/160th in June 2000. After command he became the 1/160th Ops Officer in 2002 and the 160th SOAR RS-3 in 2003. BG Evans assumed command of 2/160th SOAR in June 2006. Then in August 2008, he assumed command of the Regiment Operational Assessment Element followed by duties as the Regimental DCO in 2009. BG Evans has served multiple combat tours as a Special Operations Aviation Battalion Task Force Commander in support of OEF in Afghanistan and OIF in Iraq. BG Evans served as the DCO of the CFSOCC-A from July 2011 to July 2012 in Kabul Afghanistan. From July 2012 to June 2014, he commanded the 160th SOAR. He then served as a Chief of Staff of the Army Senior Fellow in 2014 at The Brookings Institution. BG Evans’ most recent assignment was Deputy Commanding General-Support, 2nd Infantry Division/ROK-US Combined Division, Republic of Korea.

A&M: Could you please speak to your role as Commanding General, Army Special Operations Aviation Command?

A&M: What are some key focus areas that ARSOAC is addressing in regards to unit readiness?

BG Evans: Our focus is people. After 16 years of sustained combat against Violent Extremist Organizations (VEOs) around the world, readiness has never been more important or more tenuous than it is at present. Fiscal uncertainty threatens our ability to sustain OPTEMPO and prepare for the next fight. Like the rest of the Army, we must be ready to meet nation state and transnational threats in an increasingly dangerous security environment. The cornerstone of our unit readiness begins with Soldiers who are specially recruited, assessed, selected, trained and equipped. We invest heavily in the training of our force to promote resiliency and expertise with partner forces around the world. By our very nature we are low density but experience high demand from the Global Combatant Commanders. ARSOAC Soldiers receive extensive individual and collective training prior to assuming their duties. Our aircrew members in some instances train for over a year before they are qualified to support the world’s most elite special operations units in one of our line companies. Additionally, we have increased our capacity and capability to build and enhance partner aviation forces around the world. Our trainers are uniquely suited and situated to take advantage of the special operations indigenous approach to enhance the rotary wing capability of our many allies and partners. Where and when we can make those partners more capable it reduces the support burden on Army Aviation across the spectrum – that’s good for all of us in the current high OPTEMPO environment. While we take pride in employing the most advanced helicopters and unmanned aerial systems in the world, the focus now and always is – people.

A&M: How is ARSOAC focusing on opportunities to advance capabilities fielding in terms of partnering in a Joint, Multi-Domain environment?

BG Evans: Special Operations Forces (SOF) are inherently joint and multi-domain in their approach. The ARSOAC possesses organic materiel development and systems integration capability that is unique in Army Aviation. Our ability to leverage conventional force and special operations funding coupled with unique acquisition authorities allows us to bring capability to bear faster and with greater precision than conventional forces. We still rely heavily on the greater Army and Army Aviation programming community for advancing our capability requirements, but we endeavor to “give back” our gains when we fill gaps with new technology. Our close ties and habitual relationships with other members of the joint special operations force enable us to leverage years of experience in traditionally “non-Army” domains like Maritime with our Navy and Marine SOF partners, and Space and Air with our Air Force SOF partners. We are practiced at synchronizing our operations in those domains and now work increasingly to include Cyber through initiatives such as Airborne Mission Networking and expeditionary reachback maintenance. Critical to our capability growth is the necessity to remain nested with the Army Operating Concept, emerging Army Multi-Domain battle doctrine and US Special Operations Command (USSOCOM) 2035 Capstone documents while promoting and providing aviation support across the Joint force through the use of the four US Army Special Operations Command (USASOC) strategic value propositions: 1) the indigenous approach, 2) precision targeting, 3) developing understanding and wielding influence, and 4) crisis response.

A&M: Discuss any Joint Interoperability across Special Operations Command in both manned and unmanned systems and how ARSOAC may be cooperating with them.

BG Evans: USASOC Strategy 2035 and our own ARSOA 2035 documents describe how the force is moving forward to obtain next generation unmanned aerial systems that provide longer operational range, beyond line of sight capabilities, and can be launched/recovered by forward SOF teams. UAS technologies are advancing rapidly and ARSOAC assumes a lead role in partnering with the other USSOCOM components to answer SOF operator requirements in the field. ARSOAC’s Systems Integration Management Office (SIMO) works hand in hand with adjacent USSOCOM Research and Development directorates to explore capabilities and rapidly transition innovative solutions into fielded technologies. These fielded technologies often begin in the SOF realm, but we work to rapidly share them with conventional forces across the services where we see value. ARSOAC systems and crews do not currently conduct Manned/Unmanned Teaming (MUM-T) in the same way general purpose aviation forces do, but we closely synchronize our assets with a myriad of joint enablers to ensure intelligence, surveillance and reconnaissance (ISR) requirements are met for our supported special operations forces.

A&M: From an industry partnering perspective, how is ARSOAC working to partner with industry to better facilitate concept to field outcomes?

BG Evans: We rely heavily on industry to fill capability gaps and enhance current capability as threats evolve. One notable example is our cooperation with the Army and other services on the Future Vertical Lift (FVL) program. Since the Army is the Department of Defense (DoD) lead agency for FVL, we are actively engaged in providing industry input for SOF requirements. Our SOA operators provide feedback to SIMO on what capabilities we would like to see in this new program. SIMO in turn works closely with industry and the programming office to guide the development process. FVL must be centered on the ground force commander’s tactical needs in the terminal area. It is imperative we do not sacrifice its helicopter-like maneuverability and agility for speed and endurance. We are actively partnering with the United States Army Aviation Center of Excellence (USAACE) and the Aviation Program Executive Office (PEO Aviation) to ensure SOF mission requirements are addressed in the FVL family of vehicles. In addition to our work on FVL, the ARSOAC routinely hosts industry briefs to allow vendors, large and small, to present aviation related solutions that reduce pilot workload, enhance survivability, strengthen logistics processes and simplify mission command. We feel this is critical to stay abreast of those advancing technologies that will ensure our comparative advantage against our adversaries in the future.

A&M: What are any other goals/challenges you are addressing going forward.

BG Evans: The current and projected shortage of rotary wing pilots in Army Aviation is also a concern for the ARSOAC. Our mission requirements are not diminishing so it is imperative that we recruit committed, capable, and trainable pilots and crew members to join our ranks. Army Aviation’s missions are challenging, diverse and enduring. We are looking for those officers who want to take on a different mission role and are seeking new challenges. The ARSOAC offers a rigorous training program that empowers aviators to operate across the spectrum of conflict in all environments. Our adversaries are unrelenting, and the future almost certainly holds challenges as tough as or tougher than those we have already faced. The ARSOAC continues to be a critical capability in the menu of options our national and theater special operations components can bring to bear on the enemy in support SOF across the Joint and Coalition teams.