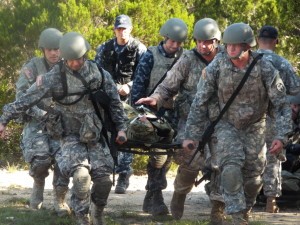 The evolution of combat medical training has been driven by evidence-based guidelines influenced greatly by data collection in recent years of U.S. wartime engagement.

As Overseas Contingency Operations (OCO) slow, are we medically trained for future conflicts? In a world that is filled with uncertainty and conflict, it is important to be adequately prepared for future engagements. The United States Military witnessed the lowest prehospital, battlefield casualty fatality rate (CFR) 2012-2014 at <9%. Once the casualty reaches a surgical asset, the CFR is <3%. This observation is directly related to the evidence-based medicine guidelines of Tactical Combat Casualty Care (TCCC), developed by the Committee on Tactical Combat Casualty Care (CoTCCC) and the Institute for Surgical Research (ISR). These successful guidelines are based on battlefield casualty data collected by the Joint Trauma System (JTS). The trend for 2015 data shows the CFR (KIA + DOW/KIA + WIA) is rising. Historically, the CFR is higher at the beginning of a conflict than what it was at the end of a previous conflict. JTS gathers data from TCCC cards and TCCC after action reports (AAR) recovered from OCO casualties. Data is also gathered at the Armed Forces Medical Examiner when casualties do not survive their injuries.

C4 provides initial pre-deployment, or sustainment Tactical Combat Casualty Care (TCCC) curriculum. This eight-day course trains Tri-Service medical personnel to apply medical knowledge in an austere continuum of care from point of injury (POI), to Role II, and evacuation. C4 closes two gaps in medical care on the battlefield identified by the CoTCCC and ISR: first, military medical providers are not familiar with TCCC; second, they do not understand or employ the scope of practice for a medic or corpsman. C4 is a centrally-funded course executed by DMRTI with the Combat Medicine Branch in the lead.

Based on the student’s medical profession, they will attend a professional program (ATLS-OE, TNCC, or PHTLS) and upon passing the written and scenario test, will receive the appropriate certification and continuing education credits. C4 introduces medical personnel to the three phases of TCCC (Care Under Fire, Tactical Field Care, and Tactical Evacuation Care) and the concept of prolonged field care in an austere environment with delayed medical evacuation. Students are placed into an austere environment – Forward Operating Base (FOB), and issued body armor, helmets, and M4 carbine simulators adding to the realistic training experience. In addition to the protective gear, each platoon is issued two stocked aid bags, a Warrior Aid and Litter Kit (WALK), and a SKED rescue system.

Students are placed into three platoons led by Primary Instructor cadre (PI), who have extensive deployment history, acting as Platoon Sergeants for accountability and instruction of subject matter expertise on tactical medicine. Each medical exercise has additional cadre to maintain an efficient student-to-instructor ratio. Students are challenged by being placed into leadership positions and required to make timely, decisive, tactical decisions. Each student Platoon Leader is given an Operations Order (OPORD) outlining the events of the week. Each evening a fragmentary order (FRAGO) is given detailing the next day’s events. Leadership is paramount to good medicine and good tactics.

Students demonstrate tactical medicine proficiency and decision making in six mission oriented exercises that stress the guidelines and phases of TCCC. Each exercise begins with a briefing and ends with an AAR. Casualty documentation and packaging for movement are stressed during each medical exercise. The C4 cadre instructs students on the importance of battlefield injury data collection to form the TCCC guidelines. These guidelines frame C4 and the medical exercises conducted throughout the evolution.

Students are organized into eight-person squads and given specific leadership and medical roles to execute. The mission is casualty recovery from a helicopter down scenario, forcing the squad to make entry into the target building. Stressors include limited visibility, loud battlefield noise, sounds of distress, and gunfire. Utilizing M4 carbines with “smart” magazines, basic squad tactics, and a Virtual Trainer Firearms Simulator, students engage an interactive screen displaying enemy combatant avatars. Once fire superiority is gained, the squad recovers the casualties and establishes a CCP. Tactical Field Care interventions begin and are complete once each casualty is packaged for movement with documentation. Each casualty is moved to a simulated evacuation point manually.

The platoon approaches the village in tactical formation to conduct a key leader engagement. The medical personnel begin to treat role players masquerading as villagers. The operation comes under direct and indirect attack; students’ progresses through the phases and treatments of TCCC. The scenario ends at the rally point with the Quick Reaction Force (QRF).

The Tactical Medicine Lane (TML) medical exercise is set in an African AO. Squads develop a plan as part of the QRF to recover casualties from a convoy attacked with an Improvised Explosive Device. The platoon must plan ground movement to the disabled vehicles and extricate casualties to a friendly village.

Roles are assigned and medical personnel treat each casualty as the squad maneuvers through various obstacles. Leadership determines the route and evacuation mechanism, TALON litter in the WALK or a SKED. In addition to employing leadership and tactical medical treatment, the exercise reinforces the need to evacuate to higher echelons of care as the combat situation permits. Good tactics and timely evacuation are vital as medical supplies are exhausted.

The Mass Casualty MASCAL medical lane exposes the students to the chaos of multiple casualties with limited supplies to treat at a Role I facility. MASCAL situations are common in a deployed and garrison setting. Planning allows students to react in an organized manner. The lane is initiated with a simulated Vehicle-Borne IED (VBIED) at the FOB entry control point. Casualties arrive and the students triage, treat, and package for evacuation. The scenario continues to present more casualties, stressors mount until the students are nearly overwhelmed. Cadre monitors students for timely and appropriate decision making and casualty care.

Simulated casualties present different trauma cases. Students are assigned to a five person trauma team and delegated roles. Each bed and mannequin is proctored by a medical professional and simulation operator. Trauma teams rotate to each case bed and delegate new roles for maximum treatment exposure.

TEC demonstrates continued continuum of care beyond a facility and dispels impressions of limited casualty responsibility once loaded onto an evacuation platform.