Innovation Designed to Unmask the Unknown 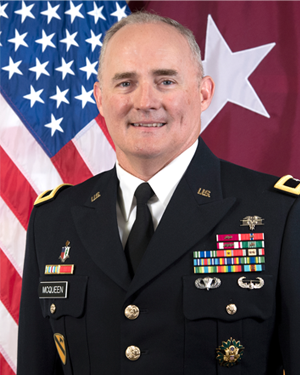 Brigadier General McQueen is a native of Texas and a graduate of Sam Houston State University where he was commissioned as an ROTC Distinguished Military Graduate in 1991. Brigadier General McQueen most recently served as the Deputy Chief of Staff, G-3/5/7 United States Army Medical Command and was detailed to Operation Warp Speed from May 2020 – May 2021. He has commanded at every level from company through brigade. He most recently commanded Blanchfield Army Community Hospital, United States Army Medical Activity, Fort Campbell, Kentucky from June 2017 to June 2019 and the 402d Army Field Support Brigade, Fort Shafter, Hawaii from August 2015 to June 2017. He served two Operation Iraqi Freedom combat tours and two tours in the Republic of Korea. He has served with the 2nd Infantry Division, the 25th Infantry Division, 4th Infantry Division, and the 1st Cavalry Division. He has also held key leadership positions at both the Medical Brigade and Brigade Combat Team levels, Division Staff, U.S. Army Medical Center of Excellence, and the Office of the Surgeon General. Brigadier General McQueen is a graduate of the Army Medical Department Officer Basic Course; he has also completed the Combined Logistics Officer Advanced Course, the Command and General Staff College at Fort Leavenworth, Kansas and the National War College. He holds a Master of Science in National Security Strategy, and a Master of Arts in Health Services Management.

C&CC: USAMRDC has received a substantial amount of national attention over the past 18 months, specifically focusing on your sprawling response to the COVID-19 pandemic. Is the command still involved in the response effort, and what are of some of your current efforts to detect, prevent, and treat COVID-19?

BG McQueen: Yes, USAMRDC is still actively involved in the federal government’s efforts to fight COVID-19, as is the Department of Defense as a whole. During the past year-and-a-half, this has been a major focus of ours. From the earliest efforts in developing virus countermeasures to our work with both convalescent plasma and monoclonal antibodies, we have been developing solutions in concert with the whole of government response while encouraging innovation and collaboration among our own scientists and partners.

One of the efforts I’m most excited about is a new method for improving surveillance capacity for emerging infections and biothreat agents called Biodefense Mass Sequencing and Surveillance – or B-MASS for short – which we developed for COVID-19. B-MASS allows large formation testing with both a rapid turnaround time and individual sample results; using next generation sequencing, any positive samples can be immediately identified by the barcode from among a large group of pooled samples. Overall, this approach enables commanders to limit spread by quickly isolating potentially positive cases.

With B-MASS, we can screen thousands of samples at one time, and see the results for each individual sample within 24 to 48 hours. This could be especially useful for surveillance testing of Army personnel during basic training, Navy personnel on aircraft carriers and other large populations. In fact, several months ago at the Naval Academy, there was a single, specific week where administrators experienced triple-digit caseloads. We were surveilling their asymptomatic population at that time, and we were able to identify eight asymptomatic and one pre-symptomatic case in their population for referral for medical care and clinical testing.
One of the greatest benefits of B-MASS is that it uses standard materials that are readily available, and it runs on instruments that are already present in DOD research and public health laboratories. More importantly, B-MASS could allow us to look for multiple diseases at the same time, meaning its potential extends far beyond the current pandemic. We’ve already developed a test that screens for two types of influenza, along with COVID-19. Using this approach, we can help the DOD respond rapidly and economically to future emerging diseases.

C&CC: In the past few months, the concept of “wearable health devices” has received substantial global attention. Here again, USAMRDC appears to be on the forefront of innovation – correct?

BG McQueen: This is a great example of USAMRDC setting the pace of innovation. The attention placed on wearable devices comes from the desire for better detection of potential infection; so this is a place where we can see our positive impact on both the Warfighter and the larger American public. To that end, our scientists have been working on a variety of wearable technologies that use computer algorithms to predict COVID-19 infections before individuals feel sick.

One effort we’re working on is with both the University of California, San Francisco, and the University of California, San Diego, to develop an algorithm designed to detect the virus before a person might even begin to notice symptoms. By combining that algorithm with a so-called “smart ring” – as in, a literal piece of jewelry you’d wear on your finger – scientists could in turn generate continuous temperature data on any subject. In a study released earlier this year, the team developing the technology found the ring accurately identified higher temperatures in people with symptoms of COVID-19. Fine tuning of the algorithms could potentially lead to early identification of COVID-19 infection.

Similarly, we’ll soon be starting a trial that will combine an infection detection algorithm with a small, wearable, waterproof sensor that is worn like a BAND-AID across the chest. This platform is currently being developed to monitor core body temperature and heat strain risk. It’s likely the sensor will also be able to measure blood oxygen levels – an important metric for the current pandemic as low blood oxygen can be a symptom of COVID-19. Sensors like these are ideal for the military as they can be worn comfortably around the clock for more than 72 hours – and potentially up to one full week – without the need for recharging. In addition, it can continuously monitor Soldiers while in garrison, throughout training and during operations. The pilot program is currently being designed and discussions are underway regarding testing this specific platform in an enclosed space like a Navy Ship or Aircraft carrier.

In a future pandemic scenario, these types of wearable technology will likely be crucial for both its ability to monitor the health of our troops across every minute of every day, and maintaining readiness by identifying individuals for earlier testing and isolation if needed — ultimately slowing or stopping the spread of infectious diseases in our formations.

C&CC: Can you provide us with the latest information on USAMRDC’s efforts to develop a new COVID-19 vaccine platform?

BG McQueen: The vaccine is being developed by the team at USAMRDC’s Walter Reed Army Institute of Medicine, and is currently in Phase 1 clinical trials. To date the results have been very promising.

The platform itself is called “SpFN”, which is short for “spike ferritin nanoparticle”. It is unique because it has the potential to combat all coronaviruses – not just COVID-19. The broad coverage of coronaviruses is where the real value of this platform comes into play, and a feature that makes it unique in the current marketplace. The SpFN vaccine employs ferritin, a protein found in almost all living organisms, and the spike proteins from coronaviruses. The ferritin molecules are linked together into a virus-like nanoparticle, and the spike proteins are embedded in the sphere; this structure approximates the size and shape of a natural virus to trigger a robust protective response from our immune system.

Another positive when dealing with protein-based vaccines like SpFN is that they are very stable. Our SpFN vaccine can be kept in the fridge for up to six months, and kept at room temperature for up to one month. This is a real value when you talk about potentially delivering this vaccine across large tracts of land or in faraway, austere environments; it has the potential to be a real benefit for our Service Members in a multi-domain operation scenario. We’re expecting more complete data on this vaccine to be released publicly very soon.

C&CC: How important is it for USAMRDC to stay in the middle of the COVID-19 fight? How does the command both influence and complement the other parts of the DoD when it comes to acquisition and, ultimately, keeping Soldiers ready and resilient?

BG McQueen: It’s extremely important to stay engaged in this effort because we must be prepared for the next potential threat. An example of a relatively new technology that can help us do that is the National Emergency Tele-critical Care Network (NETCCN), which was developed by USAMRDC’s Telemedicine and Advanced Technology Research Center. NETCCN creates “virtual critical care wards” that can bring high-quality care capability – via current handheld mobile devices – to nearly every bedside in the country and has the potential for impact in both the military and civilian worlds. What sets NETCCN apart from standard telehealth care is that it operates from point-to-point – or, from “anywhere to anywhere” – as opposed to the traditional “hub and spoke” model, which is dependent on a single outlet broadcasting instruction to a series of single users. This enables NETCCN to rapidly scale for surges in demand. In addition NETCCN is suitable for military and civilian austere environments as it is a cloud-based, low-resource, stand-alone health information management system. A tool like this could truly revolutionize care during large-scale disasters, or in other emergency situations where there are simply not enough qualified clinicians on-site to provide care; think earthquakes or other natural disasters. Further, NETCCN could allow a medic to aid in life or death, complicated care issues that might normally be beyond the scope of their expertise given that they would have access to and support from literally any echelon of care.

The development of NETCCN is a great example of the power of partnerships and collaboration – key elements in everything we do at USAMRDC. For NETCCN specifically, we relied heavily on our partnership with the Medical Technology Enterprise Consortium, a nonprofit designed to accelerate the translation of medical technologies into solutions focusing chiefly on the health of U.S. military personnel and veterans. Partnering with MTEC allowed us operate a solicitation process in a more transparent and collaborative manner, breaking down traditional acquisition barriers that tend to restrict government-industry interactions.

A notable success story for NETCCN occurred during its first month after launch, when a bedside nurse in Guam used NETCCN to call for assistance with an unstable COVID-19 patient. That nurse reached a physician from Brooke Army Medical Center and a nurse from Naval Medical Center San Diego for an evaluation, with the U.S.-based team quickly diagnosing the issue and walking the on-site nurse through a procedure which eventually stabilized the patient.

C&CC: Do you have any additional goals planned for USAMRDC moving forward?

BG McQueen: We always want to do more – to maximize the capabilities we can deliver to the Warfighter. We’re always trying to build upon the talent and expertise we have, and – in turn – we’re always trying to ensure we use our wide partnership base to bring new and promising ideas or technologies into sharper focus. It’s a challenge– but it’s also a great opportunity to demonstrate on a consistent basis who we are, why we play such an important role within the DOD and how we can have a substantial impact in the overall care of the Warfighter and Nation.