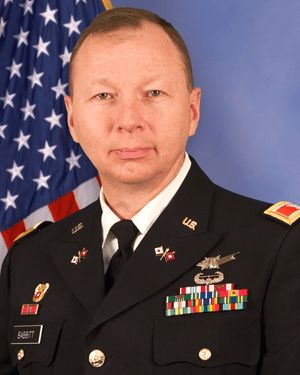 A&M: From a ground mobility perspective, what are some considerations PEO-SOF Warrior factors into programs in order to maximize operator maneuverability?

Col. Babbitt: We’re constantly driving innovation within our mixed fleet of vehicles to provide the foundational capabilities our operators need. Examples include more durable chassis, more powerful drivetrains, and modular designs that both meet requirements and deliver superior off-road maneuverability and handling in the most demanding operational environments.

Near-term priorities for ground mobility are focused on modernizing platforms to align with the National Defense Strategy and our commander’s planning guidance. These priorities include key capabilities such as hybrid/electric drivetrains to provide silent drive and to support additional electronic capabilities; adapting platforms for precision strike/intelligence, surveillance and reconnaissance (ISR) integration; exploring autonomous/semi-autonomous operation; reducing our thermal, acoustic, and visual signatures; and reducing cyber and electronic warfare vulnerability.

Col. Babbitt: Capitalizing on advances in power management has been a focus for visual augmentation systems. More efficient power utilization by consolidating power sources and only powering components individually and when disconnected will free up space and weight on our operators.
Current Small Business Innovation Research Phase I efforts are pushing developments in color, high-definition and digital cameras, as well as more powerful “smart” computer engines, which are being miniaturized to provide more capability in smaller packages.

Additionally, we’re always keeping an eye out for promising, yet more radical solutions coming in from the startup culture here in America. For example, we’re teaming with AFWERX and other government activities on developments in contact lenses that have augmented reality projected in front of the eye by an invisible display embedded in the contact lens. We keep our hands in these sorts of disruptive solutions because we prefer to disrupt ourselves, rather than wait for a competitor to disrupt us.
Our team relies on industry-driven advancements, big service development solutions that can be modified to SOF needs and other hybrid government/industry collaborations like AFWERX, SOFWERX, Sandia Laboratories, Irregular Warfare Technical Support Directorate and Science and Technology directorates to acquire advanced technology and transition a 60-80 percent solution to us. Once that capability is in the hands of users, we continue to improve it through a constant feedback loop between users and industry partners.

Col. Babbitt: Our operators can be vulnerable without air support. As you know, aircraft require a very large footprint and logistics tail. We are currently developing a capability to provide our teams close air support and precision fires launched from the ground, organic to our teams. Building on the success of the Switchblade 300 that has been used in theater for almost a decade, these new systems will be highly mobile and easily deployed, giving our operators the organic ability to see with a raptor’s eye and strike moving or stationary targets with precision. Although concepts of employment and proliferation through our formations will be worked out over time, systems like this have great potential for not only decreasing our support footprint but also increasing our teams’ effectiveness.

In the small-arms portfolio, we are focusing on multiple upper receivers that will provide superior firepower and be able to combine with service provided weapon components to reduce cost and streamline logistics. As an example, our Upper Receiver Group-Improved can increase barrel life of service M-4’s by up to 3.5 times (from 10,000 rounds expected barrel life to 35,000 rounds). This will reduce the logistics tail needed to support our operators both in training and combat.

A&M: As operator equipment is key to protection and survival, can you talk to any improvements in medic kitting and casualty evacuation?

Col. Babbitt: We are always striving for better medical capabilities with a single goal in mind: to decrease preventable deaths on the battlefield. We’re driving innovation in this area by maintaining positive relationships with both our outstanding medics and industry partners as well as monitoring for and evaluating shortfalls in our current capabilities and evaluating technologies to address those shortfalls. Through the years, we have constantly modernized our programmatic configurations (e.g. Operator Kit, Medic Kit, Casualty Evacuation Set). Some examples of this modernization include:

“Behind the Plate” Operator Kit: Novel packaging in which operators are able to limit the burden of carrying their individual first aid kit on the outside of their body armor – freeing up much needed real-estate for other operational necessities.

Col. Babbitt: We have several short-term challenges, but for this answer we’re going to look longer than what you normally expect. While we know that any course we set into the future will need revectoring over time, we see several trends and technologies that have the potential of evolving and potentially disrupting our current programs. Here are some of those trends and technologies we see affecting the hyper-enabled team into 2030:

Zero-Processing, Exploitation, and Dissemination (PED) ISR: Rather than sending raw data back to a cell of intelligence analysts, as processing power increases (either through quantum computing or increases in silicon-based computing) and artificial intelligence (Al) makes significant leaps ahead producing useful capability increases, we see today’s processing, exploitation, and dissemination being done by Al on servers in a team/platoon/squadron’s vehicles, and eventually on the individual operator.

Zero-Orbit ISR: Rather than putting large pod-carrying drones and aircraft in the sky to provide target identification and confirmation from altitude, we see tactical cyber exploitation of ubiquitous mobile phones and existing civilian infrastructure, paired with fully-autonomous small drones, as providing all the ISR necessary to execute targets.
Zero-Signature: Advancements in signature management will make operators and their mobility platforms virtually invisible in both the visual and infrared spectrums. As night vision proliferates world-wide, the ability to avoid detection will replace the ability to see at night as a dominant competitive factor.

Zero-Radio Frequency Signature: As capabilities to detect, categorize, and visualize radio frequency (RF) capabilities emerge and proliferate, we see a team’s RF emissions signature as being a primary vulnerability in strategic competition. Conversely, we see the ability to see RF-emitters as game-changing to tactical operations.

Remote Presence: Drones are already replacing human operators as the first in the door. As drones become increasingly capable, we see teams of drones executing objectives under the command of humans in increasingly remote locations of relative sanctuary with no presence required near the objective.

Ubiquitous Flight: In the United States, flying drone logistics and fully autonomous ground vehicles are already breaking long-standing policy blockages, paving the path forward. While flight will probably never make ground transportation obsolete, over the next decade we foresee a need to change the mix of large flying platforms and ground platforms to include smaller manned and unmanned flying platforms with maneuverability and speed characteristics parallel to what will exist where we operate.

Untethered Logistics: As the battlefield becomes more visible to all adversaries, the need to shift bases of operations more frequently and untether from normal logistics processes will increase. As such, we see technologies like water­from-air harvesting, solar/battery systems, and electric vehicles as helping lengthen the time teams can untether from logistics support. Additionally, we see logistics convoys and medical evacuation as fundamentally transforming to autonomous vehicles.

Mass through Manufacturing: Humans take decades to produce and train, and the morale effect of casualties is only growing in the hyper-connected, always-on world of social media and constant news. As such, drones will move from enabling humans to replacing humans as combatants. Drones can be mass produced in vast quantities by advanced nations while other nations may continue to use humans. This trend will drive the need to develop lighter, cheaper anti-materiel weapons as well as further develop anti-drone technologies for air, ground, and sea.