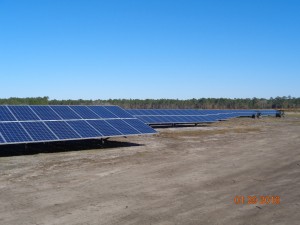 The U.S, Army has stood up a new solar farm project at Ft. Stewart, GA, in an effort to test the impact renewable energy has on day-to-day operations.

With ES2 as the driver, the U.S. Army Office of Energy initiatives (OEI), Fort Stewart, GA, the General Services Administration (GSA), Georgia Power and the Mission Installation and Contracting Command are working together to develop a 30- megawatt (MW) alternating current (AC) solar project at Fort Stewart. The installation is the largest Army installation east of the Mississippi River with 279,271 acres of land. As the home of the 3rd Infantry Division, Fort Stewart is the Army’s premier power projection platform on the east coast. And its proximity to Hunter Army Airfield and the port in Savannah, as well as robust connections via road and rail, make Fort Stewart a vital part of our nation’s defense.

This project will provide approximately 17 percent of the installation’s annual electricity requirement. As the Deputy Assistant Secretary of the Army for Energy and Sustainability, I provide strategic leadership, policy guidance, program oversight and outreach for energy and sustainability throughout the Army enterprise to enhance current installation and operational capabilities, safeguard resources and preserve future options.

The Fort Stewart project is expected to produce 30 MW of electricity, which will include over 133,000 solar panels and is on schedule to begin commercial operations in September 2016. Renewable energy produced on Army installations increases energy security, which is essential to mission effectiveness. Energy is key to everything the Army does. Energy supply shortfalls and power distribution failures, whether caused by acts of man or acts of nature, represent a strategic vulnerability – they increase the risk to our missions. As the cost of renewable energy comes down, renewable energy projects become increasingly attractive for the Army. This project is part of the Army’s plan to develop three, 30 MW AC solar projects, one each at Forts Benning, Gordon, and Stewart, and is collectively referred to as the “Georgia 3×30 Project”. The Army is currently developing 14 large-scale renewable projects across our installations.

As the largest consumer of facility electricity in the federal government, the Army is in a central position to realize the benefits of a variety of technologies including solar, wind, natural gas, power storage, microgrids, etc. Solar energy is beneficial across the entire Army, and solar energy projects help the Army by cutting energy costs and building resiliency on our installations, while increasing the capabilities of tactical combat formations and outposts. The Army is strengthening energy security and sustainability at our installations by developing and executing cost-effective, large-scale renewable energy projects like Fort Stewart. With regards to civilian use, implementation of large-scale renewable projects allows utility companies to defer costly infrastructure upgrades, thus benefiting consumers by reducing rate increases.