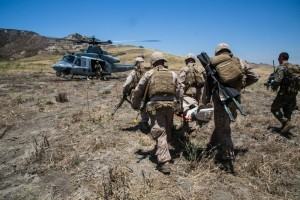 In scenarios like these, tourniquet use has saved thousands of lives in the recent Iraq and Afghanistan conflicts. However, there are few options preventing internal blood loss from penetrating foreign objects, gunshots or explosive fragments. In severe exsanguinating cases with suspected traumatic brain injury (TBI), the only option is resuscitative surgery and rapid evacuation. Saving lives in this fast-closing window is unique and challenging. Currently, there is no effective fluid treatment for a casualty suffering severe internal blood loss and/or suspected TBI.

We are working with USSOCOM to develop a new intravenous (IV) or intraosseous (IO) ultra-small volume 3% NaCl adenosine, lidocaine, Mg2+ (ALM) fluid therapy to fill these capability gaps. Our idea is different than most because it focuses more on the combatant’s response to trauma, rather than on the trauma “stressor” itself, which may explain why the therapy confers such broad-spectrum protection against hemorrhagic shock, cardiac arrest, regional myocardial ischemia, arrhythmias, endotoxemia, infection, and sepsis.

We entered combat casualty care medicine in 2008 from our earlier work in cardiac surgery. In 1998 one of the authors GPD asked: “Could the human heart in cardiac surgery be pharmacologically manipulated to operate more like the heart of a natural hibernator?” Natural hibernators do not flood their heart with unnaturally high potassium (K+) during their overwintering states, as is standard practice to stop the heart in cardiac surgery today. The drugs chosen to arrest the heart naturally were adenosine and lidocaine. Magnesium was included to reduce ischemia-reperfusion injury and post-operative arrhythmias. In addition, by simply lowering the ALM concentrations after surgery, the heart ‘resuscitates’ quickly because it is already electrically poised to “beat”. ALM can safely turn the heart ‘off’ and ‘on’ like a light-switch. Two recent prospective randomized human trials have demonstrated the drug’s superiority over high K+ cardioplegia.

From this background, we then asked could the ALM concept, at lower non-arresting doses, resuscitate the heart after different trauma states, and protect the whole body? Additionally, parallel animal studies had shown that the drug possessed potent anti-inflammatory properties and corrected coagulopathy after hemorrhagic shock.

Addressing Three Key Gaps in Forward Combat Medicine: What is the Solution?

Some of the characteristics of the ‘ideal’ resuscitation fluid suited for combat field use are presented in Fig. 1. Unfortunately, no such fluid exists but it brings home the unique requirements of what is required in forward environments. The choice of fluid remains controversial, however, for hemorrhagic shock, donor blood or blood products are preferred. Two to four liters of normal saline, as was common in the Vietnam war, or one liter of colloidal Hextend, as recommended in the current Tactical Combat Casualty Care (TCCC) guidelines (if blood or blood products are not available), does not work. In 2013 the US Federal Drug Administration (FDA) placed a ‘black box warning’ on the clinical use of Hextend in critically ill patients. In our view, their use tells us more about what the body can tolerate to stay alive than the fluid’s therapeutic value. Over 100 years ago, physician George H. Evans also flagged the untoward effects of (ab)normal saline when he wrote: “One cannot fail to be impressed with the danger of the utter recklessness with which salt solution is frequently prescribed, particularly in the postoperative period … the disastrous role played by the salt solution is often lost in light of the serious conditions that call forth its use”.

3) The lethal combination of mTBI and internal hemorrhage

In our first model, ALM therapy reduced uncontrolled blood loss by up to 60% after 4 hours, and improved blood flow to the gut and kidney compared to saline controls. In contrast, Hextend administered according to TCCC guidelines, promoted internal bleeding, inflammation, coagulopathy, organ failure and early death. ALM’s ability to significantly reduce blood loss may arise from its unique ability to improve cardiac function, correct coagulopathy, blunt systemic inflammation and improve tissue oxygenation. With respect to blood loss, the therapy is not a foam or synthetic compound like those used to plug a flat tyre, it is a drug that rapidly restores normal clotting allowing the system to form a viable clot. The ALM drug therapy acted like a “pharmacological tourniquet” which may have significant potential to save countless lives in forward and civilian prehospital settings.

In our second study, the same ALM therapy protected against mild-moderate TBI and reduced secondary ‘hit’ complications with improved cardiac function over 4 hours. Mortality was 25% in saline controls and 0% in the ALM group. During Phase 2 (drip), saline controls continued to decline functionally, and after 3 hours they had 60-70% falls in cardiac output (CO), stroke volume and contractility, right heart dilatation, severe arrhythmias (VT/VF), and could not form a viable clot. In direct contrast, ALM-treated animals had significantly higher CO and contractility at lower heart rates, no arrhythmias, correction of coagulation towards baseline, and twofold higher plasma fibrinogen. Right heart enlargement (failure) in controls after 4 hours was particularly interesting but did not occur in ALM-treated animals. Clinically, it has recently been reported that neurogenic cardiac and pulmonary dysfunction is often under-diagnosed in head injury patients, and our data may have clinical and military significance. Further mechanistic studies and post-injury cognition tests are required in larger clinically relevant models.

In our third model of combined mTBI and internal hemorrhage, ALM therapy resulted in 50% survivability and 50% less internal blood loss compared to 100% mortality in 3% NaCl controls. Death was associated with progressive shock and cardiovascular collapse. Untreated animals and controls also developed a profound hypocoagulopathy, which was corrected in ALM-treated animals. The ongoing challenge in this area has been to design a therapy that does not raise the blood pressure too high and the casualty dies from “popping-the-clot”, or too low, causing the brain and body to become starved of oxygen. Our early data show that we have partially succeeded in helping the body to help itself in this model. As with non-compressible blood loss alone (Model 1) ALM therapy reduced blood loss in animals that survived (or died) by 50% compared to controls.

Whole Body Protection: A Systems-based Approach to Hemorrhage and TBI

The multiple benefits from the ALM fluid therapy appear to arise from the drug’s ability to improve CNS-Cardiovascular Endothelium coupling which assists to correct coagulopathy, reduce inflammation and maintain adequate tissue oxygenation (Fig 1). The therapy appears to achieve a more natural homeostatic, restorative steady-state without depleting the body’s energy reserves. The advantage of using ultra small-volumes cannot be overstated, since many fluid therapies shock the body a second time, rather than being therapeutic and protective. There is the further complication that some casualties in shock do not respond to current saline or colloidal fluid-based therapies with an increase in stroke volume to improve blood supply to the tissues. This problem of knowing who will or will not be a “responder” is challenging, and does not appear to have been adequately addressed in civilian or military combat medicine. From the above USSOCOM funded study, the total ALM volume administered over the entire 3-4 hours was about 1.0 ml or < 5% of the animal’s normal total blood volume despite liver resection. In human terms this volume would be equivalent to ~150 ml for a 70kg human over 4 hours. The logistical advantage of small cube-weight cannot be overemphasized for military use in remote, austere environments or during evacuation to definitive care.

Most, if not all, combat medics or trauma surgeons would agree that the best survival outcomes occur when retrieval times from point-of-injury to definitive care are short as possible, which led R Adams Cowley to propose the “golden hour” concept in the 1960s. Time, however, is a curious concept. As St. Augustine wrote in the 5th century and paraphrased here: “Everyone knows what time is until someone asks you the question”. Biological time is more complex. A small mammal, for example, can go through 50 generations, as a single elephant grows old. Hibernators or summer estivators can drop off the ‘standard’ Kleiber line of metabolic rate and body mass, and drop their metabolic rate by over 90%, then return to the ‘line’ when conditions are more favorable. Humans, like all non-hibernating mammals, are believed to possess the ‘hibernating’ genes but to date they remain hidden deep in our genome. Trying to pharmacologically extend physiological or biological time relative to clock time with new therapies has proven to be extremely challenging.

Translation to the Field: Where the Action Is!

An ongoing challenge is selecting the right animal model to test new drugs. The mouse model is problematic for severe trauma studies because under stress it can enter torpor (overnight hibernation), and therefore may not be directly applicable to humans. The rat, guinea-pig, rabbit, dog and pig cannot enter torpor during stress, and may be better models for translation. Selecting the right model is further complicated by the graveyard of clinical studies trialing new drugs that previously have shown promising results. In the USA alone, less than 10% of drugs entering clinical trials become an approved drug. Possible reasons for failure to translate appear to relate to: 1) the heterogeneity of the human condition compared to animal models; individuals may have different responses to the same trauma stressor, 2) regulatory hurdles, and 3) poor trial design, and 4) ongoing difficulty of trial design in the real-world environment. For example, thirty-day mortality for a particular drug trial may be a meaningless end-point when death from a catastrophic injury occurs in minutes to hours. Furthermore, a drug may buy biological time and prevent death early, but the patient dies from unrelated secondary ‘hit’ complications within the 30-day period.

Another possible reason for lack of translation is that many new drugs target downstream single nodal steps or pathways “after the horse has bolted”. Reductionism is important in breaking a system into its constituent parts, however, focusing a drug therapy on a single nodal target ‘downstream’ does not do away with the system. The current practice of identifying, documenting and treating a single perturbation during or following an operation, and then the next defect, and so on down the line, may result in what the famous US surgeon William C. Shoemaker termed “an uncoordinated and sometimes contradictory therapeutic outcome”.

It is our view that near-term drug breakthroughs are more likely to originate from ‘upstream’ systems-based approaches, rather than the more popular ‘downstream’ single-nodal targets. The ALM therapy, for example, has a number of advantages for possible translation and field adoption: 1) the drug combination is currently used at higher concentrations in cardiac surgery, and is safe, 2) administration time is short (up to 4 hours), 3) volumes are low removing the need for untoward aggressive fluid therapy, and 4) it has logistic advantages in forward, resource limited-environments where resupply is problematic. To help with translation into the field we have recently teamed up with trauma surgeons of the Expeditionary and Trauma Medicine Department, Combat Casualty Care and Operational Medicine, Naval Medical Research Unit, San Antonio, (NAMRU-SA), and Level 1 trauma team at the Department of Surgery headquartered at Denver Health Medical Center, Colorado. Only time will tell if small volume ALM therapy has raised the bar high enough to translate into military (and civilian) medicine with improved outcomes.